I have been making NPCs, monsters and scenarios inspired by Pu Songling's Strange Tales from a Chinese Studio. For each entry I take two or more stories from the Penguin Edition translated by John Minford and make gameable material. You can see my previous entry HERE. Today I am doing Dragon Dormant (#62). 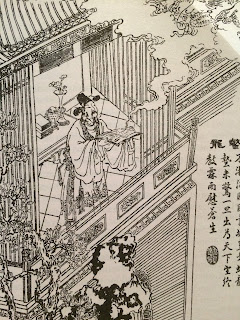 The Dragon Dormant is a short tale and normally I'd do a number of other tales alongside one this size. However I've been thinking about this one a lot leading up to it (because I knew it would be one of the harder ones to game), and I came up with an idea that I think works best as a single blog post.

In the Dragon Dormant, a scholar notices a small glow-worm like creature crawling on his table leaving a trail of green slime. He brings it to the window and encourages it to take flight as the dragon he knows it to be. It eventually does so when bows and dons formal attire. Then he finds evidence that it originated from one his bamboo book container.

STUDIO ENCOUNTERS AND DORMANT BEASTS (OPTIONAL RULE)
Studios and libraries can be perilous as well. They seem to attract all manner of fox spirits and ghosts. But even the books, paintings and wall scrolls can be sources of danger. In Wandering Heroes of Ogre Gate, characters use relevant knowledge skills to research information in libraries or in studios. Using this optional rule, these also serve as survival rolls to avoid supernatural encounters.

Many of these encounters link to monsters in this blog series. If they do not link, then they should be found in the WHOG rulebook. The Dormant Beasts are described below.

Dormant Beasts begin as ideas on a page, flashes of inspiration that manifest and grow into an adult sized creature. They often start as a larva-like worm. But you never know what they will grow into. They are all different and there are at least ten types reported in imperial gazetteers. Some turn into benevolent dragons that bestow good fortune, some turn into terrifying creatures that delight in killing men. All Dormant Beasts can speak or communicate by telepathy and they all respond to formal displays of respect positively (this might not stop them from attacking but it would give them pause).

When a Dormant Beast first appears roll on the following table to see what it turns into:

CELESTIAL BUTTERFLY
Celestial Butterflies begin as small caterpillars and transform into colorful butterflies the size of a carriage. Once born they depart for the heavens, but not before trying to do some good in the world by lessening the lifespan of the wicked and increasing the lifespan of the virtuous. The hum of their They age the wicked and reverse aging in the virtuous.


Sense Karma: On a Detect Roll against Resolve, they can sense a person's Karma rating.


CELESTIAL FIRE GLUTTON
Celestial Fire Gluttons look like large wild cats or dogs that can walk erect and breath fire. In many ways these look and behave like normal Fire Gluttons, except their flame breath, in addition to burning flesh, cures Mental Afflictions. The do not seek to kill, but cure anyone they sense is suffering such a curse.


Powers
Fire Breath: Celestial Fire Gluttons breath a lashing line of flame that strikes anyone in a 20-foot area. Roll Fire Breath against Evade. On a Success the target takes 4d10 Fire Damage. In addition the Target is cured of any Mental Affliction. On a Total Success the target catches on fire.

DRAGON OF GOOD FORTUNE
Dragons of Good Fortune grow into large serpent like creatures that fly into the sky. They are believed to be newly born Little Dragons ascending to the celestial realms where they can serve the gods. They are still young and do not have all their powers yet but can give luck to the virtuous.

ELEPHANT SNAKE
This creature is widely known but the name is very misleading. It looks like a large bird with a thick build and solid beak. Its appearance is almost pleasant and jovial. However its tongue is a deadly viper head and its elephant like scream can shatter men's bones.

Elephant Scream: The Elephant Snake can deliver a scream that sounds like an elephant. Roll 4d10 against all in hearing range. On a Success targets suffer 3d10 wounds plus lose 1 Point of Hardiness as their bones begin to fracture inside (the Hardiness returns at a rate of 1 per month). On a Total Success the bones are so damaged that the Hardiness returns 1 point every 6 months.

Viper Strike: Whenever an Elephant Snake bites a target it gets a second attack at 2d10 against Parry. On a Success its viper tongue bites and delivers venom that kills in 1d10 minutes without an antidote made from the Elephant Snake's blood.

FALSE DRAGON
They feed on the terror of humanity, and love nothing more than to strike men dead. They play on man's curiosity, at first appearing as a small worm, then they form into something like a dragon, taking flight and almost acting playful. Then they strike with lethal teeth and enervating skin.


Flight: False Dragons can move through the air like water.

Grazing Strike: False Dragons slice through flesh when their body grazes targets. Make a 3d10 roll against against Parry. On a Success the target takes 2d10 damage and loses 1 Rank of Qi. Qi lost to a False Dragon takes a month to recover.

GORING GREBE
This diving water bird, looks like a massive great crested grebe, except its face is distinctly human shaped and it has four long twisted horns rising from its head. They are playful, enjoying games of hide and seek with humans. They initially chase and fly away, playing gently, but they are easily angered and inevitably strike men with their lethal horns.

HEALING BIXIE
A healing bixie looks like a normal create of its type except its body is the color of jade. When it appears it is tremendously thankful to anyone in the area and will heal those who are injured. If no one is injured, it takes note of those present and returns when they are in need of aid.

Powers
Bite and Horn: A Bixie’s bite does 7d10 Damage while its horns do 5d10 damage. However, against Demons or Spirits their teeth also drain 2 Points of Hardiness and transfer them temporarily to their rider (for one hour).
Healing Touch: The touch of a Healing Bixie restores up to 4 wounds.


Beast Strength (X20): Their Base Lift for Muscle is multiplied by 20. They can also exceed the dice cap on Damage rolls for physical Attacks.

RESTORATIVE OWL MONKEY
These look a little like Owl Moneys, birds with owl-like heads and monkey-like bodies. Their feathers a gorgeous combination of bright colors and their eyes scintillate like gold in the sun. They often leave behind a feather for the virtuous. Anyone who dies while wearing this feather is brought back to life. If they see anyone wicked, they try to kill them.

Powers
Restorative Feather: A restorative feather can raise the dead. If someone wears the restorative feather of these creatures when they die, they are instantly brought back to life and healed of all wounds. The feather is burned by the process. These feathers are only given to people with Karma ratings of 2 or greater.

Impaling Spike: If it has space to dive or charge, the Restorative Owl Monkey can do 4d10 Open Damage when it attacks (use Claws skill).

Sense Karma: On a Detect Roll against Resolve, they can sense a person's Karma rating.

STRANGE SNAKE
A strange snake looks like a giant snake with the head of a man, and a single vertical eye. The hair on its head is like that of a porcupine and can be hurled at foes. When it breathes, a great frost emanates and its eye can hurl men back with a glare.

Eye: With a gaze the Strange Snake can throw a man back against any nearby wall or object. They can throw people up to 60 feet back in this manner. Make a Command Roll against Evade. On a Success the Target is thrown back with so much force they take 1d10 Falling Damage for every ten feet thrown.

Frost Breath: This can affect anyone up to 8 feet in front of the Strange Snake. Roll 3d10 against Evade. On a Success the target takes 4d10 Open damage from the cold. On a Total Success the target is briefly frozen, taking 4d10 Open Damage and being unable to move for 2 rounds.

Hair Strike: The hair of a Strange Snake is thick and sharp like the quills of a porcupine. Roll 3d10 against the Evade of anyone in a 20 foot cone. On a Success the targets take 2d10 Damage. On a Total Success they take 2d10 Damage plus 1 Extra Wound.

TWIN-HEADED VIPER PHOENIX
This creature resembles a phoenix. Like all Dormant Beasts it begins as a shiny worm, but grows swiftly into a beautiful bird the size of a small table with two long heads, one looks like a phoenix the other like a viper. The heads can talk, can be be male or female, and have opposing personalities: one is benevolent towards humans, the other likes to eat them. Whether the creature attacks depends on which head makes the most convincing case.

Powers
Negotiation: To see which head governs a given action (such as choosing to kill or not kill a group of player characters), have each head roll Persuade. Whichever gets the single highest result is the one who decides.

Venom: The bite of a Twin-Headed Viper Phoenix delivers venom that kills in hours and causes cramping pain.