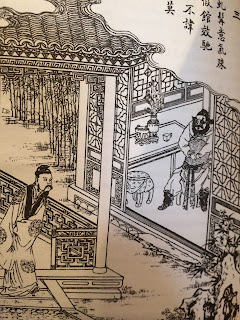 Fox Trouble is about a fox spirit who hunts foxes. It is an interesting turn and he is quite zealous. The story closes with him decapitating the heads of some fox spirits. I thought it would be more gameable to expand the idea and make a Fox Demon that hunts all evil beings (so something for evil parties and PCs to fear).

Lust Punished by Foxes is about a man whose abode is overrun with Fox Spirits. He keeps a secret stash of aphrodisiacs and the foxes punish him by slipping some into his wife's congee (causing her to try to seduce his good friend). With this one, I thought it would be more gameable to focus on the punishing aspect. That way, as an encounter they can more easily be directed at PCs, essentially turning their bad habits against them.

Mountain City is about a magic city that appears to onlookers suddenly. It is described at the end as a city of ghosts. I wanted to stay in theme though, so I tailored the idea here to the previous two entries. This is an idea I'd like to expand into a larger dungeon adventure later.

PUNISHING FOX
These are minor Fox Spirits who only take Fox Form but are capable of moving around invisibly. They despise bad people and play dangerous pranks on them as punishment. They like the punishment to fit the crime and so will do things like spill a poisoner's own poison in his stew when he isn't looking.

Powers
Track: Punishing Foxes can use their Detect Skill to track scent.

Illusions: Punishing Foxes can make minor illusions. Roll Deception against Wits and on a Success the target sees briefly something the Fox desires the target to see.

EVIL HUNTING FOX
Evil Hunting Foxes appear as eccentric old men in their human form and want nothing more than to purge the world of evil (including foxes). They are particularly adept at taking the heads of evil beings with a sword swing. They think they are righteous, but in truth they feed off the life of the creatures they kill, absorbing their wicked energy and making themselves stronger.

Head Taking Stroke: Evil Hunting Foxes are adept at slicing off the head's of evil men, demons or spirits. Against any creature or human with Negative Karma they can use this ability. Roll Melee against Parry. On a Success the target takes Normal Damage plus 2 Extra Wounds. On a Total Success they decapitate the target.

*See description in their powers entry.

GHOST CITY OF THE ROGUE MAGISTRATE
This city can appear suddenly from out of nowhere. It is resplendent with pavilions, storied inns and countless towers. The place looks celestial and pristine from without. It remains briefly, for no longer than ten minutes, and it only appears to people with -5 to -10 Karma. For this is the home of Heavenly Magistrate Sun. For before the days of Hen-Shi there was an 9th Magistrate in charge of judging the dead. His purview was Mercy. When Hen-Shi appeared, he was no longer needed and was cast from their halls. But he continued on, against the wishes of the Enlightened Goddess. His city roams in search of the cruel, always careful to depart before Supreme Judge Yu takes notice. Once Magistrate Sun finds Cruel men to punish, he places them on trial, and puts them through his eighth levels of hellish torment. However he likes to let people wander in and enjoy the sites before having his constables arrest them. Escape is difficult but not impossible.