GAMING STRANGE TALES FROM A CHINESE STUDIO 70-75: THE BLACK BEAST AND MORE

The Black Beast is about a group of men who spot a tiger placing a deer in a hole. They retrieve the deer, but later the tiger returns with The Black Beast. The tiger leads the Black Beast to the hole and both are surprised to find it empty. The tiger grovels, but the Black Beast raises its paw and strikes the tiger dead. I like the idea of  a creature that other animals obey, allowing for them to organize against humans. So I went that direction with this entry. 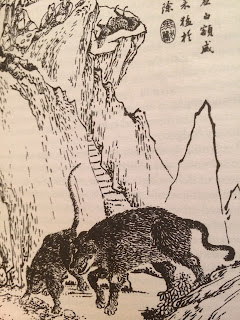 The Stone Bowl is about a man named Yin Tu'nan who rents housing to a young scholar named Yu. One day he goes to visit Yu and sees spectacular things, including a drum that causes flowers to bloom and turn into butterflies. When he tells his friends about the wondrous object, they start hanging around Yu's residence and the young scholar gets so annoyed by the attention he moves away. Later Yin inspects the grounds and finds a fantastic bowl that holds water even when cracked and has all manner of strange properties. He keeps the bowl and the water eventually turns into crystal, then melts, leaving behind only a shard of the outer bowl. A taoist arrives and asks to buy the fragment, saying it was once a vessel that belongs to the Dragon King. I liked the drum in this story so made a magic weapon inspired by it (with some alterations).

A Fatal Joke is about a man who nearly has his head cut off by bandits and is thought to be dead. When the family tries to prepare him for burial they detect a slight breathing and try to help him recover. Ten years pass and he bursts into laughter at a friend's comment. His wounds open and his head rolls to the ground.

Raining Money is about a a man who befriends a fox spirit but tries to exploit that friendship for material gain. He presses the fox spirit to use its magic to make him wealthy and it plays a trick on him, causing him to believe he has come into possession of a great abundance of money (which quickly vanishes). When he confronts the fox spirit, it berates him for his greed and leaves. I created a ritual around the fox spirit's trick for this entry.

Twin Lanterns is about a scholarly man who falls on hard times and has to take up residence living above a tavern. There he encounters a man with two maids bearing lanterns who introduces him to a mysterious woman saying they have a fated love. The woman comes to him each night for months but he eventually returns to his family home. He sees her once again just outside the property and she informs him that she must depart but asks him to escort her away. He does so and she explains that their fated love is at an end then leaves up the mountain side with the two lantern bearing maidens. For this one I decided to make take inspiration from the lanterns and make magic objects tied to fate.

THE BLACK BEAST
The Black Beast is a legendary creature called the Magistrate of animals. It has a single eye and long heavy black fur. According to rumors it commands other animals in the wilderness to do its bidding, and they frequently bring it fresh corpses to gain its good favor. The danger the Black Beast presents is it can cause animals to coordinate with long term planning against local humans. It often creates ambushes or has its animal minions make traps.

DRUM OF THE BUTTERFLIES (CELESTIAL OBJECT)
They say this fell from Meidu, and was a war drum belonging to the Red General. According to legend he created it to both be effective in battle and also to impress the Dutiful Empress with a display of beauty to prove his love. When struck it calls forth a whirling storm of flesh devouring butterflies. Every round you beat on the drum it produces a storm of Butterflies who swarm the area doing 3d10 Open Damage to anyone inside the zone each round as it tears their flesh from their body. There is no need to roll. So long as the drum is struck, the butterflies harm those in the area specified. It doesn’t harm any one belonging to the sect, army or clan of the person striking the drum.

NEW FLAW (GRUESOME WOUND)
You have a terrible wound that hasn't healed properly. It leaves a deep open scar, fistula or similar lingering effect. Normally the wound isn't any trouble but when it is aggravated by a particular trigger, such as laughter, coughing, bending into the wrong position, you must make an Endurance roll TN 7. If you fail the roll, the GM should roll 4d10 against your Hardiness. On a Success you lose 3 Hardiness. On a Total Success you lose all your Hardiness and begin to die unless healed by a physician or by magic. The trigger is selected by the GM when the Flaw is taken.

GOLD FOR THE GREEDY (NEW RITUAL)
This ritual allows you to create thousands of coins from each coin you posses. However the effect only lasts for ten minutes before they disappear. To perform this ritual you will need 8 coins to use as a foundation. Place these in the ground like seeds. Roll Ritual TN 7. On a Success each coin creates 1,000 additional coins. On a Total Success each coin creates 10,000 additional coins. After 10 minutes the new coins vanish.

THE TWIN LANTERNS
These magic lanterns are believed to be the eyes of a long faded god or goddess. They look like traditional lanterns and must be carried by two servants to work (these cannot be mere friends or allies, they have to be the servants of the user). The lanterns have the ability to take the user to their fated companions, trials etc. Essentially any thing the person is connected to by fate, this will transport them to that individual, place or object. To use them the person simply needs to walk, making a Survival roll for the relevant terrain TN 7. On a Success the person and his or her servants are transported to their desired location, traveling hundreds of miles in an instant. On a Failure they are lost in a random location and can't use the lanterns again for a month. Roll on the following tables to see where they are lost.

INVISIBLE GHOST
An invisible ghost cannot be seen by human eyes. However animals can sense them and are able to harm them as well. Invisible Ghosts are playful and vindictive. They often take up residence in a chamber or hall and frighten away the people so they can have it all to themselves. Provided they are not interfered with, they leave people elsewhere in the residence alone. If any dare enter their territory, they attack through the night.

Powers
Invisible: Invisible Ghosts are unseen and hard to strike. In order to hit them, one first must make a Detect roll against their Stealth. Otherwise the attack is made at -3d10. Animals can see invisible ghosts and can harm them.

Attack: Invisible Ghosts attack by throwing objects. They can hurl anything available, doing 2d10 Open Damage with such items.

Immunities: Invisible Ghosts are immune to Mundane attacks. They are harmed by Kung Fu, Energy attacks, magic and animals.

DWARF FOX
Dwarf Foxes are cowardly thieves who feed off of human life energy and want nothing more than to fill their homes with riches beyond measure. They prefer to attack by surprise, often stealing from a target in an obvious manner to lure them into an ambush. When they can they work together. However they are easily frightened away.

Shapechange: A Dwarf Fox can take the form of a small man about three feet in height or of a fox.

Escape: Dwarf Foxes are able to teleport short distances once every minute. On a Successful Athletics roll TN 7, they can teleport up to 30 feet.

Sense Wealth: Dwarf Foxes can smell wealth on a person with a Detect Roll. Even if the rich individual doesn't have the money on them, they can sense that person's vast resources by looking at them.

Cowardly: Anytime a Dwarf Fox is hit in combat, roll the damage against its Resolve in addition to Hardiness. If it meets or exceeds the Resolve, the creature tries to run away.

Posted by BEDROCK GAMES at 9:35 AM