GAMING STRANGE TALES FROM A CHINESE STUDIO 65-67: TWENTY-YEARS A DREAM AND MORE 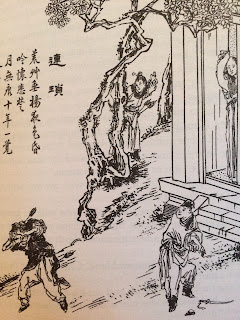 Twenty Years a Dream is an amazing story about a man named Yang Yuwei who moves near a graveyard and falls in love with a ghost. She tells him her name is Locket and is pretty honest about her ghostly nature. They spend many evenings together engaged in innocent pastime activities. After he saves her from a powerful spirit, Yang Yuwei brings her body back to life with his own blood. When she awakens she tells him that the past twenty years felt like a dream. There is a lot more to the story than these broad stroke details, and my synopsis hardly does it justice. I am probably going to base a scenario around it and test it on out on my group then post the scenario on the blog. In the meantime it also inspired me to make Dreaming Ghosts. These are ghosts that appear in peoples dreams and basically become the basis for recurring dreamscape adventures.

Mynah Bird is about a man and his talking bird who use its stunning abilities to earn a living. They trick a prince into buying the bird, and the Mynah then tricks the prince into releasing it for a bath, at which point it flees and presumably returns to its owner (who cannot be found).

Lamp Dog is about a spirit who takes many forms and falls in love with a steward whose master commands him to kill her. He attempts to weaken her by taking her red blouse (which he believed was a source of her strength). She is angered by the betrayal but eventually forgives them. However she says their love is at an end. He wanders with her one last time to a Sorghum field where he goes to her home for a feast. When he leaves the manor vanishes as he walks away.

DREAMING GHOSTS
Dreaming Ghosts haunt people by visiting them in dreams and drawing them into a terrible nightmare adventure. The dream is recurring and based on something from the ghost's past that produces a dreamscape. The dreamscape can be anything from a house, to a cavern or dungeon or even a city. Whatever it is, there is usually a problem that needs to be solved, an object that needs to be found or a great evil that must be destroyed. The details are a direct result of the ghost's death (other spiritual forces may even be involved). The Dreaming Ghost keeps haunting people until it finds someone capable of finding a solution and laying it to rest or restoring it to life.

Dreaming Ghosts can draw in a single person or multiple people. Those pulled into its torment in dreams can be harmed in the dreamscape. If they die during the dream, they wake up with real injuries that can not be healed until the dream is resolved.


Powers
Deathly Scream: If the Dreaming Ghost is angered it flares with energy and release a powerful scream that rips the dreamers apart. Roll 4d10 against the Resolve of any who hear. On a Success they take 6d10 Open Damage. If they are killed they wake up with 1 semi-permanent wound that can only be healed when the dream is Resolved.

Haunting Dreams: These are caused by Dreaming Ghosts, who haunt a person each night. Haunting Dreams are essentially an adventure that occurs in character's dreams. Anyone can be affected and multiple people can be drawn into the same dream. Most often Dreaming Ghosts inflict this on people who take or find one of their personal belongings. Once this happens, the target gets pulled into the dreamscape each night where they keep encountering the same problem until they resolve the dream or die. While in the dreamscape, the characters have their normal stats and if they are killed, they wake up with 1 Wound that cannot be healed until the dream is resolved.

YAN THE TALKING MYNAH BIRD
Yan is a Mynah Bird with black feathers and an orange crest. His beak is orange as well but gleams like a freshly polished ornament. He can speak three human languages fluently and is quite knowledgeable. However he was reared by a cunning charlatan who tought him clever tricks for earning a living. He makes his way in the world deceiving men and earning their trust, hoping to improve his fortunes. He has recently convinced a group of martial heroes in Xuanlu that he is their master reborn. Now he dreams of being master of the Wulin. They feed him fine meat, place him in a palatial golden cage for comfort at their headquarters and follow his every commander.

DIVINE MYNAH DISCIPLES (18)
This small sect once followed Sect Leader Wu, a martial hero who resided in Xuanlu. There they did many righteous deeds and were well regarded. However he died suddenly two years ago, and a month later Yan the Talking Mynah Bird arrived at their headquarters to announce he was their dead chief returned. He spoke like their master so they believed. He  declared a new name for the sect: Divine Mynah Sect. He also told them he was wrong about being righteous and that only riches and fame mattered. His men quickly embraced the new philosophy and have been terrorizing Xuanlu ever since.

Divine Mynah Disciples fight with daggers, wear blue and orange robes and make their way robbing the people of Xuanlu.

SORGHUM SPIRIT
Sorghum Spirits are spirited sorghum stalks. They are bound to the field where they grew. There they reside in peace in a spiritual manor with their fellow sorghum spirits. However if they are harvested and fermented into Sorghum they rise from the brew as a flying lantern and must find their way back to the fields where they came from. They stop at nothing to return and will attack anyone who gets in their way.
Defenses: Hardiness 6, Evade 8, Parry 5, Stealth 7, Wits 7, Resolve 9
Key Skills: Arm Strike: 3d10 (3d10 Damage plus drain), Speed: 3d10, Muscle: 2d10, Detect: 2d10, Knowledge Skills (Any Five): 3d10

Powers
Drain: Sorghum Spirits Drain wits on a successful Arm Strike. On a Successful Attack they reduce Wits by 1. If they drain a person to death, they gain 1 Max Wound. They also gain a knowledge skill from the person.
Change Form: Sorghum Spirits can take multiple forms, becoming objects like lanterns, animals such as dogs or cattle and they can also take human form. If they are ever harvested and turned into wine, they rise as a vapor and become a lantern to begin their journey home.
Ghostly manor: The In the Sorghum Fields where they reside is a house shared by all the Sorghum Spirits of the field. This can only be seen as they approach it. Once they are inside it, it disappears from view.
Drunken Aura: A Sorghum Spirit is surrounded by a sweet fragrance that causes people to feel delightfully drunk. Anyone who is within 60 feet of a Sorghum Spirit is exposed to this effect. Roll 3d10 against Hardiness. On a Success the target feels drunk and gains +1 to Hardiness and Resolve, but suffers a -1d10/-1* Penalty to all other skills for the next ten minutes. On a Total Success the target is very drunk and suffers -2d10/-2 to affected Skills but gains a +2 to Hardiness and Resolve.
Immunities: Sorghum Spirits are only vulnerable to magic and magic weapons. However they all have a sacred object that connects them to the human world (this can be anything from a bronze mirror to a strand of silk). If they lost this object they are vulnerable to normal attacks.

Posted by BEDROCK GAMES at 3:57 PM