The title is a little bit of click bait, but Steve and I, get into some of our criticisms of the fight choreography in the Cobra Kai series. I really enjoyed this season overall, but there were a few elements that didn't quite rise as high for me.

Posted by BEDROCK GAMES at 7:13 PM No comments: I want to talk today about something I do in all of my Network games, particularly when I run something like Wandering Heroes of Ogre Gate (note though this can also be applied to Strange Tales or Righteous Blood, Ruthless Blades): the inverted encounter roll.

The inverted encounter roll, or perhaps a better label, the active survival roll, is built around how encounters work in Network beginning with the game Sertorius. There is an Open Skill called Survival, which you take based on terrain (so you can have Survival: Wilderness, Survival: Mountains, Survival: Cities, etc). It is used for a variety of things but one of its chief functions is to roll during travel to avoid encounters. If you fail, the GM rolls on an encounter table. However because it is based on a skill roll, the logic Bill and I formulated (which was Bill's answer to my question about the causality of it all) is this: while the player is rolling to avoid an encounter, that encounter isn't just springing into being, it is assumed to exist. So you failing an encounter roll, then rolling a result of Fox Spirit on the Encounter Table, doesn't mean the Fox Spirit showed up because you failed: it was always there and you moved through the terrain skillfully enough that it never noticed you or so you could evade the threat. 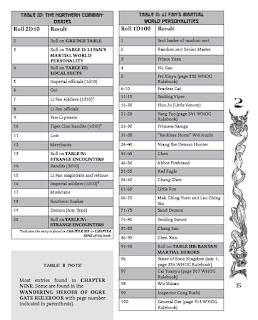 What this implies is a Survival Skill roll can be used actively to look for encounters and to look for people. The way I do this is very ad hoc, but, generally if players are out looking for something rather specific, for example they want to find any spirited creatures roaming the woods, I do the following: ask for a Survival Skill roll based on the TN of the terrain from the player with the highest Survival Ranking (or the one who chooses to track). On a Total Success, provided such a creature is there (i.e. it is on the encounter table or I know one would be there) they find it. On a Success, I give them a 50% chance of finding the desired creature (otherwise I roll on the table and they find something else----sometimes I rework the table on the spot to reflect the kinds of things they would be most likely to find if they were doing such a focused search). On a Failure, I roll for a regular encounter.

This isn't the only way to do things, but it is a useful tool that has emerged naturally in play in my games.

It can also be used to find people and things of interest (particularly in cities). When used this way, I simply apply the same procedure outlined above but use my Martial World Personality tables. Another way to apply it is if players are looking for something in particular. For instance in a city, they may try to find a teahouse or a gang (or maybe they are looking to buy something on the black market). If such a thing exists in the city, then I would have them make a Survival (Cities) roll using the above method.

Jeremy and I talk about the role of rulings in Righteous Blood, Ruthless Blades, and we answer a question about Races and Rooftop Chases. Check it out on the Righteous Blood Podcast:

Posted by BEDROCK GAMES at 5:39 PM No comments: