GAMING STRANGE TALES FROM A CHINESE STUDIO 101-104: CORAL AND MORE

This is the last new entry for the Tales from a Chinese Studio series I started last month. There will be a follow-up post to compile them all together, but this is basically the end of it. I am going to give some general thoughts before moving into the regular topic because I've been writing these every day for some time now and it has been an interesting process. 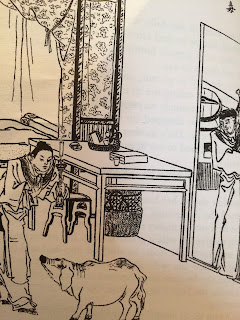 I think this has been a great exercise for  me as a Gamemaster. It really forces you to make mechanics, adventures, monsters and characters you otherwise would not, and you get surprising results from that sometimes.

This has also been a lot of fun. I think forcing myself to slowdown and deal with entries in small batches (rather than read the book in the course of a few days) gave me more time to digest and remember each individual story.

It definitely took portions of my day up at times, and when I got sick with the flu last week it  even got exhausting. But I still enjoyed it a lot. I think some entries have been stronger than others. The point of it was to make something and force myself to find inspiration in stories that might not normally spark something. Some of my favorite entries will be reworked and given to a proper mapper for use in upcoming books, but most of the stuff is just here for the blog (also the things I do end up using will undergo pretty serous revision due to an important announcement.

I mentioned in a previous post that I was thinking of making a Strange Tales variation of Ogre Gate and putting it on the blog. Making these entries has convinced me. I've started work on the game, but the result is so different from the core Ogre Gate rules (it still uses the base system but is a lot simpler and faster). I like this so much and the playtests have been going so well, I decided to make it our next book in the pipeline (which means it should follow House of Paper Shadows). This will be a new game with more streamlined mechanics and greater emphasis on lethality and horror. It is directly inspired by Strange Tales (and the movies based on it). Right now we are just calling it Strange Tales. The book itself will be lean (probably no more than 80 pages) and the focus will be on gaming content. So it won't be a massive setting book like Ogre Gate and I am trying to keep the core rules section under a single page. The bulk of the book will be stuff like character creation, adventures, monsters, etc. Stuff that will help the GM. The setting will be more open and at this time I don't plan to go into great detail there. I see this more as something you could run in China during any period you wish, something you could run as a setting you develop through play or something you could take to the Ogre Gate setting.

I am looking forward to working on Strange Tales and I am happy to answer any questions people might have about it. In the meantime here are the last entries in this series.

Coral is about a glutton named Yue Zhong who is devoted to his mother that he cuts a portion of his own flesh to feed it to her when she is dying. After she dies he marries but finds no pleasure sex so he divorces. Some time later his mother appears before him and tells him she has been residing at the Holy Island of Nanhai. He divorces his wife and goes on a pilgrimage where he meets a courtesan named Coral. They develop a chaste relationship, despite sharing the same bed they do not consummate the relationship. The two go together to Nanhai and there they make offerings. Coral sees an image of Guanyin, while Zhong sees images of his own mother. They eventually have to part, but he soon meets a young boy who turns out to be his son from his earlier marriage. He raises him as his own and a few years later Coral returns to him, saying she would like to be his wife as their relationship was a pure one. Together they raise his son until he too had a wife. One day while drunk, Zhong attains a kind of enlightenment, seeing his humble abode as a palace of jade. The scar on his leg begins to form into blossoms and he tells Coral their marriage will be at an end when they bloom. She convinces him to stay a little longer, and he agrees. Later Coral reveals she is actually an apsara, cast temporarily to earth because her mind was fettered. Both she and Zhong leave the world at the same time in a fabulous display of light and perfumed mist.

For this one I decided to focus on the Nanhai scene because that gave me an idea for a Rock Demon.

Mutton Fat and Pig Blood is about a type of divination done through poetic couplets. This gave me an idea for a ritual.

Dung Beetle Dumpling is about a woman who puts dung beetles in her mother-in-law's dumplings. That night the woman turns into a pig and is paraded through town as an example the next day by the local magistrate. I liked the idea of a dumpling that turns people into pigs but under the right circumstances can be used more effectively against the person who made it in the first place.

TRANSFORMATIVE DUMPLING
This dumpling is made from dung beetles and tender pork. It requires a Talent (Cooking) TN 10 roll to make. Anyone who eats it, turns into a pig for 1 day. If the maker of the dumpling is somehow tricked into eating it, then he or she is permanently turned into a pig.

THE SANDSTONE OF HEN-SHI
This is a red sandstone that resembles common depictions of Hen-Shi. It is found deep in the Banyan Mountains. Followers of the Sandstone Sutra are particularly drawn to it. According to legend any person who is truly merciful can go before the stone and make offerings and Hen-Shi might appear. Of course this is not true, the sandstone is actually a rock demon. As soon as a person of substantial virtue appears, it devours them. Any witnesses believe they saw Hen-Shi and forget about the person who died.

POWERS:
Immunities: The Sandstone of Hen-Shi is immune to normal mundane attacks, only taking damage from Kung Fu Techniques.

Hen-Shi Illusion: Roll 5d10 against Wits of anyone who sees the Rock Demon. On a Success the Rock Demon looks like Hen-Shi to them, and seems entirely non-violent in its actions. If they witness a person die, they completely forget about that individual for the rest of their lives.

Stone Attack: The Sandstone can manipulate nearby stone, causing the jagged edges to rise up like teeth, or causing it to change shape and constrict. Anyone within 100 feet of the Sandstone is vulnerable. Make Stone Attack Roll against Evade. On a Success it inflicts 5d10 Damage plus 2 Extra Wounds.

Qi Absorption: The sandstone can absorb Qi from the blood and flesh it consumes. It only feeds on those with good Karma. Every 10 Qi rank it absorbs increases its wounds by 1and every 20 Qi ranks absorbed gives it a new power.

SPIRIT COUPLET (NEW RITUAL)
This ritual is done by writing a line of poetry and then beseeching a spirit or god to enter you and respond with an answering line. This isn't done in the form of a question in answer but traditional poetic couplet. It can sometimes be vague. To perform this ritual, first make a Talent (Poetry) roll against the Wits of the spirit or god you are trying to appeal to. If that succeeds make a Ritual Roll TN 7. On a Success it finishes the verse for you.

MASTER CHEF REN
Master Chef Ren is one of the most skilled chef's in Qi Xien. His specialty is taking everyday objects and cooking them so expertly that they taste like meats, vegetables and also provide a full day of nutrition. While this might seem like little more than a novelty, he can be a very handy companion indeed during a famine.

Posted by BEDROCK GAMES at 6:48 AM