Vocal Virtuosity is about a girl who can imitate the voices of many different people at once and uses this skill to feign talking with the dead. I decided to make a new talent based off this one.

Fox as Prophet is another story about a man who rents living quarters to a Fox Spirit, but this time they get along well. When it is revealed that the guest is a Fox Spirit, instead of causing alarm, a flood of interested neighbors and officials come to see the unusual creature. The Fox has both the ability to see into the future and to see people's past lives. I thought this would be the good basis for a monstrous threat that can turn into an adventure hook and become an ally. 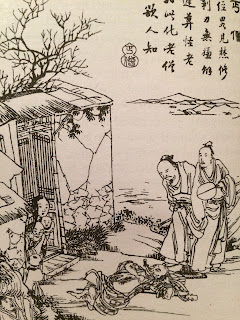 Fox Control is a little on the graphic side and contains sexual violence (for the game content below I completely avoid this). It is about a man who is being chased by a Fox Spirit. He meets a strange healer who gives him an aphrodisiac which is so effective that the man kills the fox spirit by having sex with it. There is an additional account in this one about a man with a large penis that frightens away Fox Spirits. Personally I find stuff like this hard to incorporate into tabletop gaming without creating issues. But I do want to be thorough in gaming every tale from the book. What I chose to do here is focus on the Fox Spirit repellent aspect and create a pill that gives characters noxious breath to dissuade such creatures.

This Transformation is a very unusual story about an ascetic monk who would beg in the city but always refused food and never seemed to eat or drink. Someone pesters him about his habits and he keeps saying variations of "You know nothing, this is the transformation that I seek". The monk is soon wasting away upon the road, and people start to shake him. He pulls out a knife, slices open his stomach and pulls his insides out. The magistrate has him buried but when a dog digs up his body they find an empty cocoon. For this one, I think pondering what the monk turned into is the interesting bit. I could see this going any number of directions, from a moth demon, to becoming immortal or some other spiritual transformation.

VOCAL VIRTUOSITY (NEW TALENT)
With this talent you can imitate multiple peoples' voices. You can also create voices based on characters and personalities you've invented. This can be used to pretend to sound like another person or even to carry on a conversation among all the voices you know at once (so it sounds like there are more people than there really are). You can master a number of voices equal to your Wits score. So if you have a wits of 7, you can master 7 different voices.

NOXIOUS FOX PILL
This pill can be made with a Medicine Roll TN 9, and requires numerous aromatic herbs and insect bile. On a Success you form the ingredients into a large round pill. When swallowed the pill causes bad breath for 1 day. However it is quite strong and also causes the user to lose 2 Hardiness (returns at a rate of 1 per week). This imposes -2d10 Penalties to skills like Command, Persuade, Deception, etc when bad breath would impact an interaction. However Fox Demons must make an Endurance TN 9 Roll to come close to the affected target (and pass a similar roll each round they wish to remain).

QUESTING FOX
Questing Foxes are gifted with premonitions of the future and also have the ability to see people's previous incarnation. Questing Foxes are far into their cultivation and are so nearly human that their other powers have greatly diminished as a result. This is something they desire, they want to be human and are willing to lose their supernatural abilities to achieve that goal. They are often given a final task by the gods before their humanity is complete. Usually they are encountered while trying to perform this task and seeking allies whom they can bless with miracles when they achieve their aim.

Sense Incarnation: If a Questing Fox looks at someone, roll Detect against Resolve. On a Success they sense the person's past life and something about their nature or character.

Task: A Questing Fox has an important task given to it by the Heavenly Bureaucracy and this is the form of an official order, written on a golden talisman. It must complete this to become fully human (at which point it can begin regular cultivation as a human with 1 Qi). It can also use the talisman to grant boons to anyone who aids it in its task. If it does this, upon completion the golden talisman turns into radiant light and bestows a gift upon the Fox's allies. This gift can be whatever the Fox demon thinks the person would want. Generally it could be something such as: cure for an illness, increase in a natural ability, good looks, wealth, a magic weapon, etc.

SILK MOTH DEMON
These creatures look like giant Silk Moths with 20-foot wing spans. Their bodies are thick with gray hair and their features radiate menacing hunger. They can spin long encasing webs and drink their foe's blood with a long proboscis tube. Silk Moth Demons are created when spirited Silk Worms cocoon. To cocoon, they must assume human form, starve themselves and cut out their insides. Their body then acts as a cocoon for their spirit to shape into a Silk Moth.

Powers
Devouring Limbs: The spiky legs of a Silk Moth Demon can shred flesh and pull out hair. On a successful Devouring roll against Parry, the creature peels off sections of skin and hair for 4d10 Open Damage plus 2 Extra Wounds.

Blood Drain: Silk Moths have a long proboscis that has a range of 20 feet. Roll 4d10 against Parry. On a Success the proboscis impales the target and the moth drinks their blood like nectar. Instead of doing damage, the Moth drains 2 Hardiness each round it succeeds on this attack.

Silk Attack: Silk Moths can strike targets with strands of silk. Roll 3d10 against Evade of up to 3 targets. On a Success the silk strikes. It can be used to restrain. On a Total Success the target is encased in Silk (Muscle TN 10 to escape; Hardiness 10, Integrity 7)