GAMING STRANGE TALES FROM A CHINESE STUDIO 80-81: DWARF AND BIRD 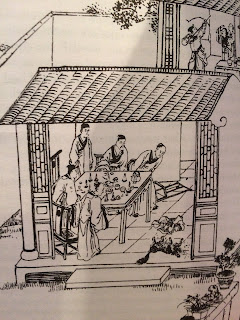 Before I get into today's Strange Tales, I just wanted to say that this series has really inspired me. I've been dabbling with some ideas for a Strange Tales version of Ogre Gate (because our pipeline is so full, it would appear here on the blog and only be released in PDF if people expressed a strong interest). Starting next week I'll be running a variation of the system designed to be simpler with a greater emphasis on horror. Character's will be weaker than in Ogre Gate, have fewer Max Wounds, but there will still be room for the occasional Yin swordsman in the style of A Chinese Ghost story. My goal right now is to post it when I cap this series (which will be once I get to entry #104).

Dwarf is a quick story about a magician who has a small man he carries in a box and displays for a fee. It turns out the man is really just a child who was kidnapped and fed a pill to shrink his body. No amount of curing efforts could alleviate his condition but the man responsible is executed.

Bird is another story about a scholar named Wang who falls in love with a Fox Spirit named Bird. This time the Fox Spirit is a courtesan at a brothel who he helps escape. They flee to another city and open up a shop. Just as things are going well her sister and mother arrive and force her to return to the brothel. There they keep her imprisoned but she has a son and he reaches Wang. He and Little Wang go to rescue the mother, and against his mother's instructions, Little Wang slaughters the Foxes responsible. His mother is shocked by his cruelty. When they are re-united, Bird cures Little Wang of his cruel nature and he goes on to be a man of great virtue.

For Dwarf I decided to make a pill based on the medication described in the story. For Bird I decided it would be based to make a quick scenario set-up. This is just a situation the GM can throw at the party, with the NPCs involved given full stat blocks. It is meant to be dropped wherever is convenient to the campaign.


DIMINUTIVE PILL
This round bolus pill is made from ground up Zhen Bird feathers and the hairs of a Yaksha Demon. Anyone who swallows it shrinks in size to 1 foot tall. Hardiness is immediately reduced to 2 and all Physical and Combat Skills are reduced by -2d10. They also effectively have 1/6th of their previous Max Wounds. The condition cannot be reversed by any known medicine or magic (except perhaps through the intervention of a god). The TN for making the pill is TN 10 (plus you have to know the recipe).
THE REVENGE OF THE HALF FOX
In this adventure the players are approached by a small boy named Little Wang, who asks if they are heroes and says he needs help rescuing his mother from the Six River Inn. He explains that he is an orphan and that his father was recently killed by a Fox Spirit. But with his dying breath his father informed him that his mother is a fox imprisoned by his grandmother at the Six River Inn (his mother's name is Bird). If they agree, he sets out with them to find The Six River Inn. The inn is always moving from place to place, so it can be hard to find. But he has a lead. His father's good friend, Zhao Donglou lives in Yun Hu and may know where the inn is.

This adventure is quite straight forward, but could be short or done over the course of an entire campaign, depending on how long it takes the party to find the Six River Inn. Until they find it, his mothers sisters continue to pester the party in hopes of killing Little Wang.

The precise location of the Inn is for the GM to determine. You can make getting there as much of a journey and challenge as you wish. Also, along the way the party will possibly need to contend with Little Wang's cruel streak. He seems nice, but he does have a seething rage he can't always control.

LITTLE WANG
Little Wang is the 9 year old half-fox son of Wang Wen, a respected scholar who married a Fox Spirit named Bird. Soon after they were married, Bird's mother, Madame Chu, kidnapped Bird and imprisoned her in a wing of the Six River Inn. She secretly gave birth to Little Wang and sent him out into the world with a sign on his neck reading "Little Wang, song of Wang Wen". He eventually found his way to his father who raised him and cared for him. One month ago, one of Bird's sisters arrived and tore out Wang Wen's stomach. He told his son he had just received a letter from Bird saying she was imprisoned in the Six River Inn. After his father died, Little Wang fled and has been seeking revenge.

Little Wang seems kindly and innocent, but there is capable of great cruelty. He intends to show his mother's family no mercy.

Powers
Borrow Appearance: Little Wang can assume the appearance of another person for an hour at a time, once per day. He cannot change his size, but he can change his facial features.

ZHAO DONGLOU
Zhao Donglou is a wealthy merchant who resides in Yun Hu. He recently came to the city to seek the company of his cousin Zhao Yi. He was good friends with Wang Wen, and has been a frequent customer of Madame Chu's. He was at Six River Inn recently and knows where it last appeared. He spent many years being drained slowly by Madame Chu and her fox spirit daughters.

MADAME CHU
Madame Chu is a Fox spirit and the mother of Bird and her sisters. She also owns and operates the Six River Inn. Madame Chu despises Bird, because she disobeyed her and fell in love with a human. She strives to make her daughter's remaining years as miserable as possible.

Defenses: Hardiness 8, Evade 6, Parry 6, Stealth 10, Wits 8, Resolve 6
Key Skills: Bite: 3d10 (4d10 Damage), Grapple: 1d10, Arm Strike: 2d10 (4d10 Damage), Speed: 7d10 (100 feet), Fly: 6d10 (90 feet), Detect: 3d10, Command: 1d10, Deception: 3d10, Muscle: 2d10, Persuade: 3d10, Deception: 4d10, Empathy: 2d10, Talent (Brewing): 3d10, Talent (Singing): 2d10, Creatures (Humans): 2d10
Max Wounds: 20
Powers
Drain Qi: Madame Chu can drain Qi with her claws. On a Successful Arm Strike or Grapple Attack, instead of doing Damage, Madame Chu can choose to drain Qi equal to the Damage she would have inflicted (recovery is 1 point an hour). She gains 1 permanent Max Wound anytime she drains a person to death.
If the target doesn't have Qi they are drained of Hardiness.
Shape Change: Madame Chu can take the form of a fox or a human.
Immunities: Fox Demons are immune to all normal Attacks, only taking Damage from Kung Fu Techniques Qi level 1 or greater.
Borrow Appearance: Madame Chu can look like another person, so long as she spends an hour of time with the individual. This lasts as long as she desires, but fades if she takes more than three Wounds.
BIRD
Bird is a good-hearted fox spirit and the daughter of Madame Chu. She disobeyed her mother and married a human named Wang Wen. Her mother found her and brought her back to their Six River Inn where she has been imprisoned since. She gave birth to Wang Wen's son and secreted him into the human world. She recently wrote a letter to her husband explaining her situation, but this enabled one of her sisters to find him and kill him.

FOX SPIRIT SIBLINGS (13)
These are bird's sisters. Unlike Bird, they are malicious and obedient to their mother, Madame Chu. They all serve as courtesans at their mother's Six River Inn. Their names are:   Daoyun, Wenrou, Xuanji, Yuhuan, Qiang, Lingyue, Tao, Ruolun, Pei, Min, Mochou, Shanhu and Jieyu.


Immunities: Fox Demons are immune to all normal Attacks, only taking Damage from Kung Fu Techniques Qi level 1 or greater.

THE SIX RIVER INN
This is an elaborate brothel with many halls and courtesans. All of the courtesans are the daughters of Madame Chu. It can appear wherever Madame Chu wants it to appear, and will sometimes remain months at a time. Madame Chu keeps her daughter Bird imprisoned in one of the halls in the inn.
Posted by BEDROCK GAMES at 1:12 PM