For those who haven't seen this, there is an app, called the Bedrock App, that is a character generator for Wandering Heroes of Ogre Gate (it is also a Sertorius character generator and a database of kung fu techniques). This App was designed by Ryan Turner who is one of the designers of Wandering Heroes of Ogre Gate. He has also been in most of my campaigns and run his own, so he knows the system very well. That was all very useful for making the app as relevant as possible for the needs of players and GMs.

The app is designed to make GMing and playing easier. I want to go over some of the features to show how useful it is.

This is the main menu of the App. Using it you can open up the Kung Fu Techniques or Sertorius Spells data bases. And at the bottom right is the button for generating characters. 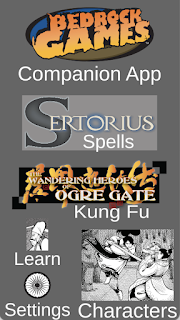 If you click Wandering Heroes of Ogre Gate Kung Fu, it will take you to the a comprehensive list of Kung Fu Techniques (this includes all the techniques from every book, except for Sons of Lady 87; but those should be in there soon). 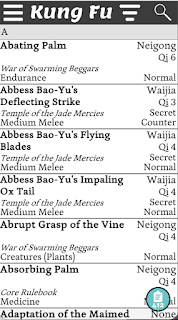 You can see this provides a full alphabetical list of techniques. That is just the start of it, if you scroll down it reveals hundreds more. If you click on one of the entries, for example, Abbess Bao-Yu's Deflecting Strike, it shows you the description of the technique and it will also draw your attention to key requirements. 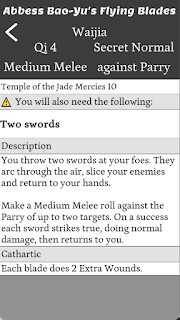 There is also a pull down menu for Profound Techniques, Evil Techniques, Immortal Powers and Immortal Insights. 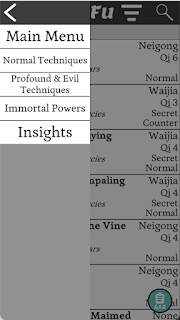 But the one of the most useful features of the app is the character generator. If you select Characters on the Main Menu, you go to a page with a pull down option listing Sertori, Martial Heroes and Hybrids. The Martial Heroes button will take you to the page for making Wandering Heroes of Ogre Gate Characters. Sertori makes characters for Sertorius, and Hybrids makes characters that blend both systems (this last option is surprisingly useful). 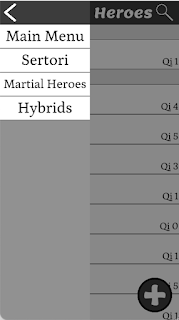 After you click generate randomly you can choose the Qi Rank of your character or NPC (this can be used to make profound and immortal level characters too). I am going to make a Qi Rank 2 character. 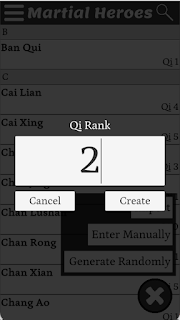 It generated a character named Pei Hou, who is pretty well balanced across martial disciplines and is good at fighting with a stick (these are some of the best Kung Fu techniques in the game). 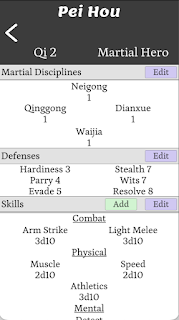 And you can scroll down to see more information about the character. Here we see the character has Stunning Stick Strike for example, but other techniques as well like Finger of Supreme Disruption. 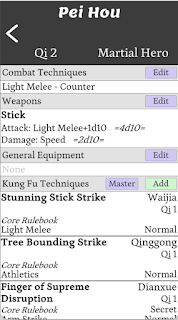 And if you click on any of the kung fu techniques listed, it will show them just as it did from the data base section. 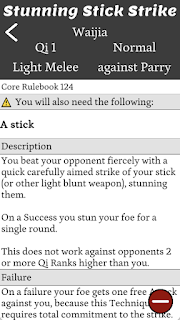 As a GM my favorite feature is the copy stat block (which appears when you scroll to the bottom of the character). This copies the stat block so I can paste it into a word program, which is great for prepping adventures. Below is an unformatted stat block (all I did was put some carriage returns between sections to make it easier to read). 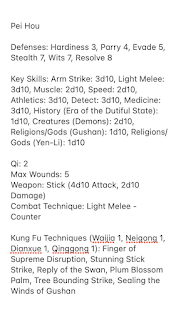 For players this app is great because it makes character creation a breeze (Ogre Gate character creation can take time otherwise). It also makes it easy to store character information, level your character, etc. It also helps with tracking Kung Fu technique information. For GMs it makes prep so easy. Having the technique database right there is handy as well (as GMs have to juggle the techniques of NPCs), but I usually use it to make on the fly opponents for my players. It also stores all your characters. 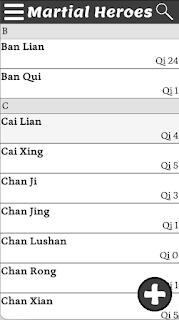 You can find the Bedrock App HERE.

Posted by BEDROCK GAMES at 1:26 PM