In my current campaign using the Sons of Lady 87 sandbox, I am making a point of using the Bedrock App to create random NPCs as they come up. I realized though I would like to use some tables to help flesh out the NPC a bit. Over the course of the campaign I hope to put together a full list of tables that help me make a compete NPC as quickly and randomly as possible. Today I want to talk about something I was thinking about this past week, using the Ego Personality Table from the Wandering Heroes of Ogre Gate core book to roll an NPC's personality.

The Ego Personality Table is somewhat obscure so it probably requires explanation. In Wandering heroes of Ogre Gate the default race for the setting is human. But the book provides four optional humanoid races for GMs and players who want more fantasy elements. One of these races are the Kithiri, who have up to six distinct personalities. Because their ego personalities can get thrown out of balance in times of stress, leading one to dominate, knowing the individual egos is important so we included an Ego Personality Table to be rolled during character creation. 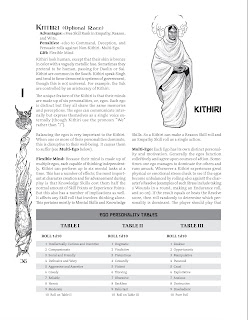 However, the Ego Personality Table can work well for NPCs too. You can see the table more closely here:

My plan in upcoming sessions is to roll on part I of this table anytime a random NPC comes up. When a real villain emerges though I will roll on the Villain portion of the Random Adventure Tables (I also plan on rolling on the random adventure tables but I anticipate needing to modify these for my Celestial Plume campaign to fit the gangster style). One alteration I am considering is having result 10 on TABLE III (pure evil) mean a roll on the Villain table itself: 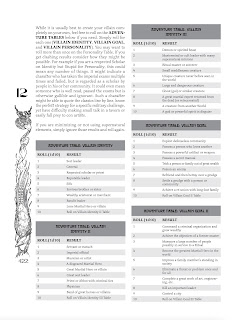 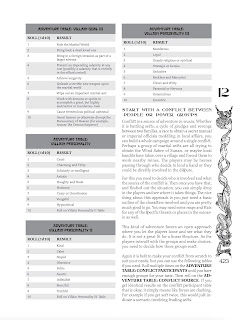 I don't always rely on Random tables in games, but I do like to employ them because they force me to introduce challenges, adventures, and characters I might normally steer away from. I think GMs develop favorite monsters, favorite NPC types, and so on. There isn't anything wrong with this. I love throwing Toad Demons at players for example. For some reason, I am just always inspired by that particular monster. But it is good to mix things up and for the GM to be surprised as well.

Posted by BEDROCK GAMES at 7:09 PM