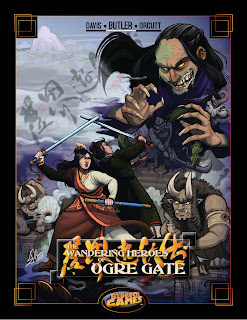 With the release of Sons of Lady 87: an Ogre Gate Campaign, I thought it would be a good time to provide an overview of the Wandering Heroes of Ogre Gate system and setting landscape.

The core book is Wandering Heroes of Ogre Gate. It is a wuxia rules system based on d10 dice pools, skills and a vast number of Kung Fu techniques. The core d10 mechanic is sleek and works pretty quickly too. You simply roll your pool, take the single highest result and compare it to the target number to see if you succeeded. Characters advance by gaining ranks in Qi, which happens when they meet certain thresholds for experience (i.e. finding or stealing a martial arts manual, fighting an opponent more powerful than themselves, growing their reputation, etc). It is set in a fantasy world inspired by Song Dynasty China. The book itself is 492 pages, with a large portion devoted to Kung Fu techniques and setting. It also includes sects, NPCs, everything you need to make a character and a sample adventure. There is also crucial GM advice, including guidance on using the Grudge Encounter system (which really helps emulate the feel of a jianghu setting). It is the only book you need to play Ogre Gate, and it is available as a pay-what-you-want HERE, and available in print HERE. 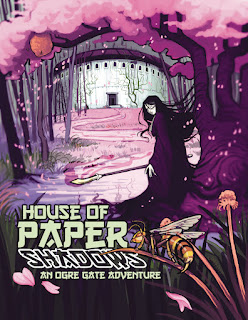 And of course there is the Sons of Lady 87 Campaign Book. This provides an overview of the imperial prefecture of Fan Xu. It also is focused on criminal organizations with an emphasis on the 87 Killers. It is available in PDF and will be available in print soon.

The next two books are adventures.

The next adventure is called Tournament of Daolu. This is just a fun book. It spans time and place as well, starting with an adventure in the southen wilderness, but culminating in a tournament in the city of Daolu, where the players may find themselves back in time meeting Sunan and Sun Mai. The city is well fleshed out, and the tournament is structured providing the GM with a clear way to manage elimination and competitors. The Tournament of Daolu is only available in PDF.

After that there is the sects of the martial world series, which has 6 entries. These are PDFs that each include one new sect. Presently they are: Maidens of the Jade Blue Sky, The Silken Robe Society, Crocodile Sect, Relentless Corpse Sect, Temple of the Jade Mercies, and The Glorious Death Cult. Each PDF is just 50 cents. 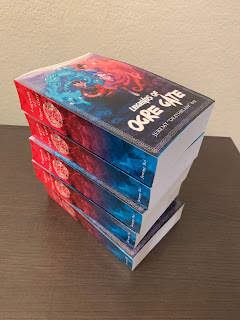 In addition this blog contains a number of useful Ogre Gate books. The first is War of Swarming Beggars. This is a campaign and setting book that describes Hai'an, a land in the south that is still independent from the empire. You can find it HERE. There is some really great stuff in it in my opinion. Originally I was going to put it out as a print and PDF book but other projects became more important to prioritize. So this is pretty much a full module, it just hasn't been through the normal editing process and it has no art.

The Blood Stained Roads of the Martial World was also meant to be a book, but it got sidelined as other projects vied for the pipeline. It is essentially an encounter book but the encounters are quite fleshed out. Think of it as one big encounter table with the encounters fully described.

The Profound Masters is also on the blog. This goes into more depth with profound sects and abilities.

Journey to the South provides a description of the lands south of Hai'an. This is pretty useful and includes my hand drawn map. I ran a number of campaigns that ventured into this territory so most of the stuff here comes from those sessions.

There is also an official Ogre Gate novel called Legends of Ogre Gate, which describes the rise of the ancient heroes Sunan and Bao (important figured mentioned in the setting history of the core rulebook). This was written by Jeremy "Deathblade" Bai, who co-wrote Tournament of Daolu, Righteous Blood, Ruthless Blades and was a part of many of the early Wandering Heroes of Ogre Gate campaigns. At the time Jeremy was translating xianxia novels so he was able to bring that knowledge to the setting. It is a large book, at 808 pages with nearly 100 chapters. 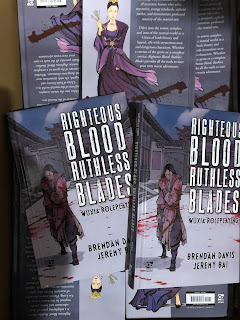 Then there is Righteous Blood, Ruthless Blades published by Osprey Games. It is available in print and PDF. I co-designed this with Jeremy, and it is quite different from Ogre Gate, but uses the same core mechanics. Unlike Ogre Gate it is set in historical China and it is specifically emulating the wuxia style of Gu Long. I'm very proud of how this one came out. It really captures what we were going for. One thing I love about it is it does a great job of emulating the genre while still remaining highly gameable. Also where Ogre Gate is sect-focused, the Jianghu of RBRB is places greater priority on individual characters. There are still sects, of course but the emphasis was more on unique characters who populate the martial world and their relationships with one another.

Posted by BEDROCK GAMES at 4:24 PM