I tried roast beef elsewhere and I couldn't find anything like I had in Massachusetts. Unable to learn from my mistake I continued ordering roast beef sandwiches, thinking I would eventually find a place that made them right. Wrong. They simply didn't make the roast beef the proper way. One might say they didn't really make roast beef at all.

A few years later, I moved back to Boston and found the same delicious roast beef waiting for me as if I'd never left. It was like the time me and my cousin got lost in the woods and wandered for hours before we finally found our way back to his parents cabin. Except it wasn't a cabin, it was a roast beef sandwich.

I do not believe I can convey in words the difference between the cold, soulless roast beef of California and Boston's hot volcano of flavor. One is like a hearty meal of tender meat made for a king, the other is like dying inside. 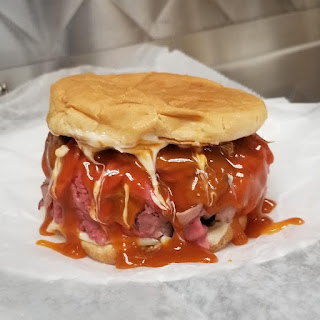 The North Shore roast beef is a local speciality. It isn't deli meat and it's not ordinary bread. It is a cut from an actual roast, warm, placed on a soft bun (usually something a little sweet like an onion roll), and it only has three possible toppings.

Truly there are just three toppings. You can order other toppings if you want. No one will stop you. But you'd be ordering incorrectly. No one will say anything. They'll keep to themselves and judge you silently while you eat your roast beef with layers of lettuce and pickles like a savage.

The three toppings are: cheese, a tangy sauce and mayo. You can get them individually, you can combine two together, or you can get all three, in which case you order a roast beef "three way". If you laugh when ordering your three way roast beef, you will be outcast from the commonwealth. Personally I hate mayo, so I just get with cheese or with sauce, sometimes plain, sometimes both.

The beef itself needs to be roasted and warm, then sliced thin. It should also be rare. North Shore Roast beef is mostly pink buttery slices of meat.

There are many places you can go around Boston for a roast beef sandwich. In recent years some higher end options have opened up as well though traditionalists will say too much culinary innovation causes the sandwich to lose its essence even if it objectively tastes good. The most famous is probably Kelly's in Revere (which has locations in other towns as well). I always loved Kellys because the sandwiches are good and they have plenty of other options like fried clams and lobster rolls. But it is one of those places whose fame is something of a double edged sword for locals and if you ask around, many people will tell you to avoid Kelly's and to go to a more hidden spot. There are also roast beef places on every corner. My uncle swears by King's Roast Beef in Salem. I know people who prefer Minos in Lynn.

Other popular places are Bill and Bob's Roast Beef in Peabody. I always found them reliable but it was never my number one place to go. Bill and Bob's Famous Roast Beef in Salem is good too, but even better after midnight (they are open late, till about an hour after the bars close). But I think the place I consistently hear get the most local praise (and I would agree with it) is Nick's in Beverly. I used to deliver in the Beverly area and that was always a nice place to stop for a roast beef sandwich.

Incidentally this is a very coastal North Shore-centric overview. I know places in Lynn, Revere, Salem, Beverly, even Peabody, but west of that my knowledge drastically diminishes and there are a probably a number of great roast beef places in that direction that are completely off my radar.

Posted by BEDROCK GAMES at 7:38 AM