A core element of Wandering Heroes of Ogre Gate is the Grudge Table. This tool helps the GM keep track of ongoing feuds with NPCs and sects, ensuring that their enemies occasionally come to settle the grudge. You roll on it regularly and it can also be triggered by a standard encounter table. It is one of the things I found most useful for bringing the wuxia genre to life in a way that feels natural. I want to go over how the grudge table can be modified to add in other complications, in particular dramatic complications.

Ogre Gate is described as Drama and Sandbox is the core rulebook. Here is a brief excerpt from the GM section: 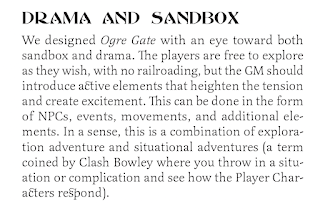 The basic idea is to introduce dramatic twists and turns, appropriate to the genre while respecting the players freedom to explore. I primarily work through NPCs when doing this. I find it easier to manage the motives and goals of my NPCs, and see what events those lead to, than orchestrating set pieces (that is just my personal approach, not a statement against using said set pieces in an Ogre Gate campaign). Something like set pieces still emerge, but when they do arise it is because an NPC is trying to orchestrate something grand and succeeds. Again though, this approach is simply a matter of taste and preference.

Deciding when and how to introduce drama can be a challenge. I usually go by a combination of what seems appropriate, what coincidences and events seem like they are naturally pushing things in that direction and as a response to actions players take. But another method is to rely on the Grudge Tables.

In the Sons of Lady 87 Campaign book, I describe a modified grudge Table that includes 'lingering complications' which specifically has criminal characters in mind. So a lingering complication may be officials tracking them down over a bank heist. Here is an example of the table: 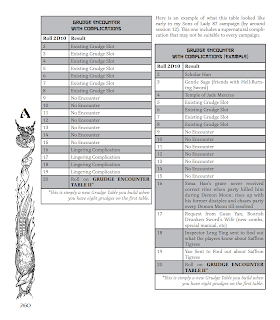 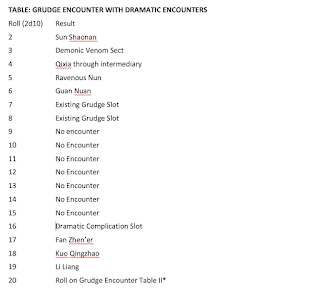 It works like a normal Grudge Table. I roll before the session begins and if something comes up, it will appear sometime during the session when it makes sense. If the result is 2-6 (which are established Grudges) then it is likely to be combat, an ambush, or some other hostile exchange. But if it is 17-19*, then the NPC result is someone they have a more dramatic relationship with, likely someone who wants something from them, and someone they want something from. And because it is a complication, I think it's fair to introduce the encounter at either a moment of inconvenience or in a way that further complicates an existing situation.
Often times this will simply be a character showing up and talking to one of the players. Their dramatic connections are usually with people they know such as friends or family. And so it need not be hostile.
For instance 18, the result would be Kuo Qingzhao, a terrible man who is friends with Wei Ziying, and wants to know the secrets of a particular poison that Wei Ziying knows the secrets to. He is wealthy, so he might show up at an opportune moment, with resources and make them available to Ziying, hoping to pressure him to reveal what he knows. It may just be a simple conversation, but one that recurs anytime they meet with Kuo Qingzhao's patience progressively diminishing. The idea being this might become more dramatic as time goes on. But if the result was Li Liang, the party leader's daughter, that could be more fiery as she hasn't yet learned he is her father and he is trying to maintain a connection with her and steer her away from the dangerous martial arts she practices. She could track him down and demand answers about her parentage or threaten to go confront her mother, Qixia (something he wouldn't want her to do). It need not be Li Liang herself either. Perhaps someone from Hai'an, like Qixia's current lover, decides to pay the party a visit to sew discord or even threaten them. And dramatic complications don't have to be pure dialogue, they could be betrayal such as leading the party into a trap or making a false accusation against them to stir up trouble.
If I wanted to I could also have this complicate an existing situation. Presently the party is attacking a man named Iron Lu in Bo Quan (he meddled with the shipment of Celestial Plume going from River Village to Tung-On). Perhaps he is a disciple of Li Liang. She is just one or two districts over (and very near where the celestial plume began its journey). She might even be present and come to Lu's aid once the fight gets underway. This would make dealing with Iron Lu much more thorny for the party.
I find techniques like this are useful for ensuring interesting things come up, but also forcing me as the GM to fit them to what is going on at the moment. It adds to my own sense of surprise while helping preserve fidelity to the genre.

Posted by BEDROCK GAMES at 5:09 PM