This was a playtest of three people: two players (A&B) and a GM. It was set in the Caelum Repubic, a vast area mainly made up of orcs. Player A ran a Hasri Sertori named Balu. Player B ran an Orc Sertori named Cael Turatani. At the start of the adventure the characters were both members of the Caelcori, an organization who operate at the direction of the Senate to prevent Sertori from gaining politically powerful positions. The Caelcori were created in the wake of the tyranny of Poro Sertorius (the first known Sertori). All Sertori in the Republic are not expected to join this order but they must abide by its rules.


Overview
Cael and Balu were summoned by Juventar, the head of the Caelcori and told to investigate possible trouble in the province of Aetorus (a bit of a resort region for powerful senators and aristocrats, but also an important center of learning and invention). According to Juventar, he had received a message sent by General Hilarus Fulvar, governor of Aetorus. Apparently the messenger was found dead and there was some question concerning the authenticity of the letter (it stated that the general was unhappy with the two Caelcori officials currently assisting him, and he would like them replaced). Juventar instructed Cael and Balu to go to Aetorus and investigate the two Sertori: Pora Lurani and Daethronus Malavine.

Juventar offered to cast Thekla’s Secret Pathway, a risky method of transporting people over great distances. He failed to cast it properly and brought back a spirit from the ethereal realm, which possessed him. Juventar attacked Cael with a Bolt of Fury, doing 4 wounds (almost enough to kill). Balu calmed Juventar with Captivation and found some Tribunes to help restore Juventar. In the wake of the incident, the two decided to travel to Aetorus by ship.
Upon arrival in the province, the characters were given quarters in the Governor's palace and told he would be available for an audience in the morning. Cael ordered musicians, food and wine before going to sleep. In the morning Cael noticed (on a successful Detect roll) that his hair had been snipped. Balu experienced illness, which a medicine roll determined was most likely a result of mandrake poisoning. Cael was unaffected by the poison, so summoned a physician to provide an antidote to Balu.
The characters spoke with Governor Fulvar and learned that he never sent any message, and that he was satisfied with the Caelcori serving his province. They did learn that one of his servants had been killed, and this was likely the messenger that Juventar found. They set out to learn more about the man, when they learned that a wife of one of the general’s officers had been murdered in the streets of the city.
Investigating, the characters found the body of an orc woman, with an arrow in her neck. A witness (a drunk) reported she had been killed by a Hasri, and that an orc had rushed to her aid to fend off the Hasri, before disappearing in a golden mist. As the investigation unfolded, they interviewed all the Hasri in the city. There were only three, and use of magic determined that none were involved. This seemed suspicious and Cael remembered his lock of hair. He inspected Balu to see if he was missing anything from his body and they found some scales had been taken. The player running Cael had the skill Magic: Misos, a knowledge skill. He asked the GM if he knew of any spells that required hair or bits of skin from people in order to make replicas. The GM decided that because the player had two ranks in the skill, he knew that there was a spell called Malevolent Mockery that did exactly that.
The characters then interviewed all the servants who had been in their room the night before. They forced on of them to confess involvement in the poisoning and obtaining the hair and scales. She told them that the Sertori, Pora, had offered to make her ten years younger in exchange for these acts. Cael and Balu decided to forgive the servant and recruit her as a spy against Pora. They then went to the governor Fulvar and asked for permission to arrest Pora and Daethronus. Fulvar was hesitant, and said he needed more evidence. On a successful Detect roll Balu and Cael noticed that Fulvar seemed younger than before. Cael immediately attacked the Governor with a spell called flying steel, which empowered his sword. However Pora had been magically concealed the whole time and cast Arch of Protection, which produces a massive gold dome to defend against attacks. Cael’s strike was thwarted. The governor fled and seemed content to let the Sertori work it out amongst themselves. Balu used Captivation to enchant Pora and encourage her to enter into parlay. The group left the palace for further discussion but were confronted by the Malevolent Mockery of Balu. Cael used Earth Mastery to create a pit below the replica, and it fell inside. But the mockery of Balu retaliated with Captivation and enchanted Cael.
The real Balu diffused the situation by casting Unity, which linked everyone mentally and emotionally, enabling both sides to see through the other’s efforts at deception. The Capitivations were dropped and a discussion had between Cael and Pora. Cael acknowledged that he and Balu were not in a position to arrest her or Daethronus because she clearly had the upper hand. He inquired about her intentions. She said she had no desire to kill them, but wished to go against the Caelcori and form a council of Sertori to replace the Senate. In the course of the conversation, Balu and Cael learned that she had many supporters, both provincial governors and members of her order. Cael offered to go to the Caelcori with her demands and help arrive at a compromise to avoid civil war. Pora agreed.
Juventar was at first reluctant to entertain Pora’s demands, but Cael and Balu convinced him that Civil War was unavoidable if she wasn’t taken seriously. Juventar decided to ask the senate to vote on the matter in the second capital, Poro Deus (which was more neutral than Cael). Pora agreed to appear and make her case before the senate, while Balu would make the case for maintaining the old ways. Cael spoke with Pora prior to the vote and got her assurances that she would work slowly within the system if the Senate didn’t go her way, rather than initiate civil war.
The senate voted to keep the old ways.
Findings
It was noted that the Angry Spirit entry wasn’t in the monster section yet, despite being mentioned as a possible encounter for a failed casting of Thekla’s Secret Pathway. This was fixed.
Posted by BEDROCK GAMES at 5:56 PM No comments: 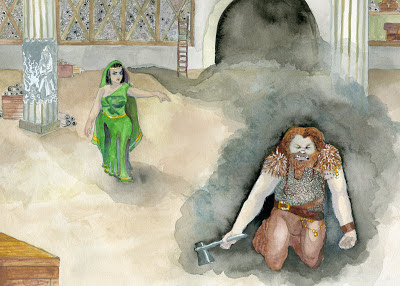 Posted by BEDROCK GAMES at 2:52 PM No comments: