Folks may have noticed I have been on something of a break here. I should be back with the remainder of the Profound Masters posts followed by news of a new game I am working on. But in the mean time I wanted to share the cover art of our the Lady 87 campaign book. I started work on this in 2017 I believe (basically been running that as my chief campaign from then to very recently). We are just working on the final edits, and hope to be getting into layout soon. This impressive cover was done by Jackie Musto, and captures a vibe somewhere between The Crippled Avengers and the Killer Constable. For those who haven't seen my posts on it, the Lady 87 campaign book is a wuxia campaign set in the prefecture of Fan Xu, within the criminal shadow empire of Lady 87. The players get to be the bad guys in this one: 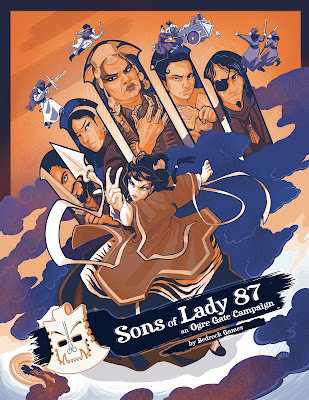 HAIL TO THE KING 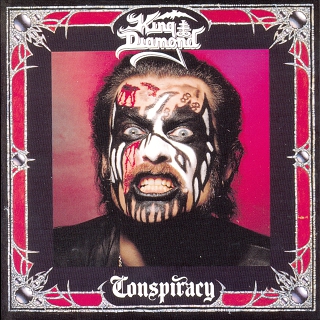 When I first got into heavy metal, it was roughly 1989-90, which means I was coming in at the tail end of 80s  metal and about to see a massive shift in the musical culture within the next couple of years. One of the first bands I discovered on my own was King Diamond. Back then there were catalogs put out by record companies where you could sign up to get tapes every month, and in one of those catalogs I saw an ad for King Diamond's The Eye. I knew nothing about the band or the man, but it described The Eye as King Diamond's masterpiece, with a picture of him in full make-up. And something about the look, the album cover and the word 'masterpiece' stuck in my brain.

I decided to buy a King Diamond album, but the only one I found at the record store was something called Conspiracy. For those who don't know, Conspiracy is a follow-up to their previous album Them, and it is a sequel. King Diamond albums each tell a horror story. And so this was like coming into a horror franchise on the second film. But the story was, at least in my opinion, gripping and well-constructed enough (blending music and story in a concept album is not easy), that it made me want to learn more. And by the two-minute mark of Conspiracy, I was absolutely hooked on King Diamond.

You can hear the full album HERE. And this is the point that sold me on King Diamond. That had everything I wanted in my entertainment at the time.

If you've never listened to King Diamond (and from here on out I will speak of King Diamond as a person, rather than collective band, simply because his persona is so central to it), or if you've only heard snippets of his screeching falsetto, the first thing to understand, is he is not for everyone. King Diamond is unique, and you either get King Diamond and like what he does, or you just can't. I have never once converted anyone to King Diamond. They always liked him from the beginning or they detested him and never changed his mind. My hope is to explain why I think King Diamond (and by extension Merciful Fate) is deserving of acclaim in the metal world. I should state, I am more of an old school King Diamond fan. I listen to the newer records too, but I think my metal brain stopped developing around 1996, and to me the period I am most interested in is from Fatal Portrait to The Spider's Lullaby.

It is impossible to talk about King Diamond without also talking about Merciful Fate, and it is sometimes hard to draw a distinction between the two projects because King Diamond himself is such a force in both. For me, the key distinction is largely in the guitar work (Andy LaRocque's playing really gives King Diamond, the band, a distinct sound). Overall there is more flourish and precision in King Diamond on the guitar front, but I love the guitar sound of Merciful Fate. The riffs are both outstanding and were more attainable for me as a player than trying to emulate LaRocque (who always struck me as more virtuoso and neoclassical in style). But even on the guitar front, you still had Michael Denner from Merciful Fate on the first couple of King Diamond albums. The other big distinction is by the time of Abigail, King Diamond albums tell a complete story (a portion of Fatal Portrait tells a story, but the whole album doesn't). Merciful Fate I think is also a bit more raw, slightly more aggressive. There are other differences as well. But the point is it is a somewhat confusing distinction and one I found dizzying when I learned that King Diamond had been in another band.

Before I even knew that Merciful Fate was a thing, I went through King Diamond's catalog to that point. I started with Abigail, because someone had told me, when they learned I liked Conspiracy, that it was considered on of his best albums. I followed with Them and The Eye. The Eye, I think, has generally been on of his more low regarded albums from that era but I had a fondness for it.

I discovered Merciful Fate after the compilation album A Dangerous Meeting was released in 1992. This combined some of the greatest hits of Merciful Fate and King Diamond....which confused me even more. I wasn't always clear if I was hearing Merciful Fate or if it was a King Diamond song I didn't know (and I wasn't much of a sleeve reader either at the time, I just listened to the music). But this eventually led me to albums like Don't Break the Oath, Melissa and In the Shadows (the latter was something of a re-union album that came out in 1993, and quite a good one in my opinion). 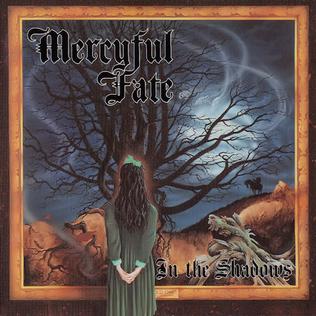 One thing I immediately noticed when I shared King Diamond with other people, was the reactions to his music were always strong. If I shared the song Abigail with folks, some were into it right from those opening riffs (in my opinion this song has one of the best riffs in metal ever written). Others would chuckle, or wince. And it comes down to the fundamental sound of King Diamond. Which I will try to explain.

King Diamond isn't just a metal singer, he is a performer, an actor, a storyteller. Listening to King Diamond you will get a range of tones, spanning countless horror movies, everything from the old Hammer Films to stuff like the Shining and Night of the Demons, or even Gremlins. He is a horror singer for horror fans. That includes the transgressive stuff that shocks and revolts parents, but also includes the winking humor and powerful atmospherics. It isn't just one note or one shade of gray. There is a variety in terms of the musical content and in terms of the voices King Diamond employs. And those voices, you either find them endearing or grating. I don't think there is a lot of in between. This is one of the chief things I loved about Kind Diamond when I first heard conspiracy: it scared exactly the way Evil Dead II scared me. Now that movie is frightening and funny in equal measure and the humor almost makes it more scary. To me, that is King Diamond, he uses doses of humor, and other tones, to help set up the horror. And he has a very good command of the horror genre as a lyricist.

He also uses very different vocal techniques and voices. Going from high pitched falsetto, to gurgles and goblins voices to sounding like a demon from the pit of hell. Like everything else in the music there is a range. There are also distant sounds, almost like characters, that you come to understand are in his tool box. And when he uses them, you know what he is trying to convey by them.

The other thing that makes King Diamond work for me, is his warm sense of melody. King Diamond writes stunning melodies, that have a classic feel to them (and classic here means very pre-metal). Some of his choruses' almost remind me of 50s and 60s pop and rock music. But that is juxtaposed against more harsh and dissonant moments.

And again I think this reflects the tone variety he uses in his voice. It is that movement from harsh, to sweet, from funny to scary, that makes it all come together for me. I think it is a highly cinematic and charismatic presentation. And there is thought behind it. It doesn't feel random.

I think that last part is also important. With King Diamond, I felt like he took each album very seriously and he took his performance, very seriously. It may sound silly at times, but if you pay attention to what he is doing, there are very few people who can reliably sing the way he does, in the many voices he does.

The final thing that I always loved about King Diamond was the enthusiasm. It felt like total comithtemnt to the project. And the music is fun. Don't get me wrong, it is often written in minor keys, it is dark, but you always have a sense King Diamond is thoroughly enjoying himself. He reminds me of great horror movie villain actors like Vincent Price. You can really see in this in a song like Halloween or No Presents for Christmas (very few metal acts have given us great holiday anthems like King Diamond).

Posted by BEDROCK GAMES at 11:02 AM No comments: