The writing and cover art for Horror Show, our new Horror Cinema RPG, are complete. This exciting new product for our Network line captures the spirit of your favorite horror films. What sets it apart is its broad range and its flexibility.

Horror Show works for any sub-genre or style of horror. We love horror movies of all stripes and chose to embrace them all. The system is designed so GMs can model adventures on any horror film they want. They can customize monsters and scale the level of realism to their taste. They also have a host of optional mechanics to draw on to help emulate the genre.

Players now have more options for character creation. They have six Roles (ranging from Soldier/Cop to Bookworm) and dozens of occupations to choose from. There are also more options to tailor skill point levels. For example we introduce a mechanic called Skill Gutting that allows players to sacrifice skill points in one category for points in another.

We’ve also reworked some of the original network mechanics. Hazards (called Toxins/Contaminants in our other games) are much more streamlined. Instead of a percentile roll, it is a simple dice pool against characters’ relevant Defense. So now it works like the rest of the system, and makes a little more logical sense.

We hope to have Horror Show on shelves soon.
Posted by BEDROCK GAMES at 7:50 AM No comments: 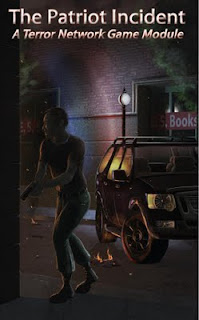 It is a night of celebration in Boston, but a group of extremists have other plans...

This heart-pounding investigation pits your players against an unexpected threat. They have less than 12 hours to track their leads and stop the attackers, or Boston will never be the same.

The Patriot Incident is a Terror Network module, and provides the gamemaster with a complete counter-terrorism investigation. It includes 19 suspects and over 20 locations for your players to investigate as they race to stop a major terrorist attack.
Posted by BEDROCK GAMES at 8:24 AM No comments:

Characters and Conflict: The heart of a successful Crime Network campaign 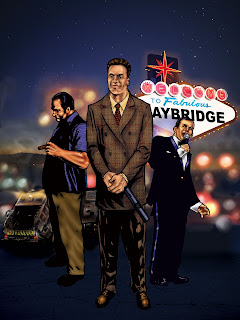 For those who haven’t played Crime Network, it is a mafia role playing game that uses our light-weight Network System (the same mechanic used in Terror Network). Players assume the role of mobsters and work their way through the ranks of their crime family by establishing rackets and guarding their reputation.

I’ve spoken with other gamemasters who play Crime Network or Mafia RPGs, and they all have their own approach to the genre. Everyone has different groups with different preferences and gaming philosophies. So my advice here may not be useful to everyone. Personally I’ve found exchanging points of view on this has improved my ability as a game master.

I also hear from Gamemasters and players who want to run such a game, but are not sure how. Usually they have questions about how to prepare for an adventure. Sometimes seeing how other people approach a game can help.

Therefore I thought it would be beneficial to share my own experience running Crime Network. I go into this in some depth in our upcoming “Orlando’s Guide to Organized Crime”, but I would like to offer some of my insights here as well.

In my opinion the best way to run a mafia RPG is the way that produces the most fun for you and your group. For me, this means starting with characters. If I have interesting NPCs in play, with strong motivations and goals, I can react to any course of action the players take.

So in my last campaign, which was set in Boston, the players started out as associates in the Martino Crime Family (I opted to use the fictional crime families from the Crime Network rule book). Right away, I knew I had to flesh out the soldier who handled their crew (and the capo he answered to as well). I also took some time to draw up other crews and capos who might come into play. With each character I was sure to establish details like hidden motives and family life. I also created rival criminal organizations (in this case a local biker gang, some Yakuza and a resurgent Irish Mob).

I knew from the start that I didn’t want to railroad my players, and I wanted them to be able to make meaningful choices during the game. To facilitate this I embedded two major conflicts in the form of NPCs.

The first was their own Capo: Frank Nicoletti. I made him a traitor trying to take out the Martino family boss, Michael “Caesar“ Martino. I figured if the players proved themselves on early tasks, he might try to bring them into the plot. For fun (and to make him more memorable) I gave Frank Nicoletti a new-age streak (incense, yoga and meditation), as well as an interest in Martino’s wife.

The second was a violent and wild Irish mobster called St. Andrew. He had forged a deal with another crime family (The Santinis) to encroach on Martino territory. St. Andrew was smart and hired street and biker gangs to do most of his dirty work at first (so it took some time for the players to sense the Irish connection). To make St. Andrew more interesting I gave him a nasty temper and a blunt sense of humor.

My next step was to flesh out characters from other relevant crime families and important crews. This took time, but once I had my master list crews, families, etc, I arranged them in power point so I had a simple visual guide for myself of who all the people and groups were.

Next I got a daytimer. This I used to keep track of my NPC’s plans. This was helpful in terms of organization, but also in forcing me to think about motivations. Using the daytimer, I knew when St. Andrew was planning to send a hit squad after the players. It also helped me know where he would be on a given day. And the daytimer wasn’t limited to St. Andrew. I kept track of all my major NPC’s plans using it.

With this information I was able to start my session with very little other preparation. Since it was set in Boston, I knew most of the locations off hand, and was able to track down real world maps for those I wasn’t familiar with. I also had a few errands in mind for the crew, but ultimately the excitement came from the players reacting to characters and the conflict they generated.

Part of this was because my players really took the initiative. They went out and set up their own rackets, sniffed out rats and basically made big plans for themselves. Part of it was the character planning I had done.

When Frank, their capo, tried to bring them into his plot against the boss, with offers of money and promotions to sweeten the deal, they made like they were playing along and decided to ally with Martino instead. What followed was one of the most memorable power struggles in any game I’ve run. In the end they stopped Frank’s power grab, and he escaped, briefly, by going into the witness protection program (in a later session the players tracked him down and killed him).

When St. Andrew made his move into Martino territory, they rose to the occasion as well. This one took some time and there were several failed assassination attempts on both sides, before the players nailed the St. as he was leaving his mansion for a meeting. It also involved intrigue, as the players had to feel out the other families to see who was on St. Andrew’s side and who wasn’t.

The key thing is I had no pre-planned climactic battles or scenes. I let the players decide what they wanted to do, and I had characters like Frank and St. Andrew react accordingly. Climactic scenes still occurred as a natural consequence of their choices, but none of the events were mapped out and I never forced anything.

I hope other Crime Network gamemasters find this helpful. In the future I may post some of my GM log here as well. I also hope to discuss some of the pitfalls I’ve experienced using this approach.