So the Ennies are coming up and there is an open vote for Fan Favorite Publisher (HERE). I just wanted to clarify for anyone thinking of voting for us, what we released this year. Note that Wandering Heroes of Ogre Gate was a 2016 release. From May 2017 to April 2018 we published the following: 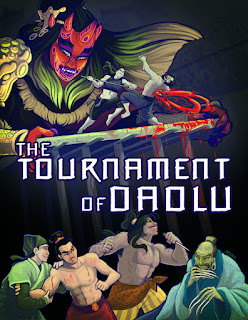 The Tournament of Daolu (December 2017): This is a free adventure set in the city of Daolu centered around a tournament. However it is a lot more than just a tournament adventure. It is a 100-page city supplement that presents the city in two different historical eras. Daolu is a place where gangs and corrupt officials reign. It also has a small time travel scenario included.

OPIUM AND THE KUNG FU MASTER

Last night on Wuxia Weekend we talked about Opium and the Kung Fu Master, a Tong Kai film starring Ti Lung and Chen Kuan-Tai. It is about "Iron Bridge Three" Leung Kwan, one of the Ten Tigers of Canton, who protects locals from a band of opium house ruffians even as he himself sinks into opium addiction. It is a very simple story, with heavy use of melodrama, that doesn't re-invent the wheel but tells its story effectively. The acting and action all help carry the movie as well. 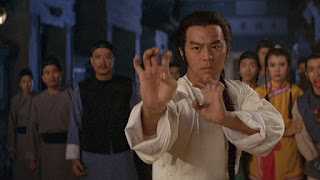 This was one of a handful of films Tong Kai directed, but his extensive work as an action director seems to have been good preparation manning the helm. The fight sequences are all good and the drama works even when it  gets heavy-handed. Despite its dark theme, the film doesn't feel grim. It is a nice balance of light and dark. The contrast works in the movie's favor.

I definitely recommend Opium and the Kung Fu Master.

You can listen to the episode below and you can hear all of our Wuxia Weekend episodes on our podcast channel at the Bedrock Podcast.

Posted by BEDROCK GAMES at 9:38 AM No comments: 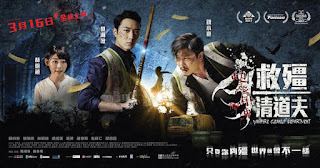 Vampire Cleanup Department is a bit sweet, with a very simple love story at its core. But it is also an homage to jiangshi films like Mr. Vampire and Encounters of the Spooky Kind. It succeeds on both fronts and I found it improved with each viewing.

The basic premise is about a character named Tim, who lives with his grandmother and joins the Vampire Cleanup Department after he is bitten by a vampire and it is discovered his blood somehow makes him immune. The Vampire Cleanup Department is in charge of secretly protecting the country from vampires, but is more of a sanitation office than law enforcement agency, so they occasionally have to work around other organizations with more power to do their job. As a new recruit, Tim learns that his parents were both managers at the department but died after being bitten by a vampire (and he was born after his mother had been infected). On his first mission, he has an encounter with a female vampire named Summer, but she mutates into something more human when she bites him. Most of the movie is about their romance as he conceals her from his superiors, and his experience training to become a vampire hunter. There is also the threat of a head vampire that looms and comes to a head at the end of the film. 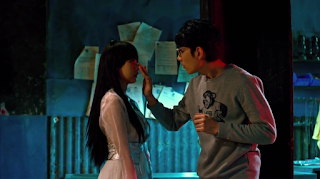 I think a lot of what made the movie work was its simplicity. It is very efficient as movies go, not wasting any time, and effectively moving the plot with each scene. Because Summer cannot speak (at least not with her vocal chords) the love story is largely a silent performance that relies on physicality and music to succeed. This is probably what makes it work so well. The other half of the movie is equally engaging, largely because the great cast and its chemistry. A lot of the movie is stuff you've seen if you are familiar with the genre, but it covers that ground well and still manages to feel fresh.

You can listen to our thoughts in the podcast episode below.

Posted by BEDROCK GAMES at 9:56 AM No comments: