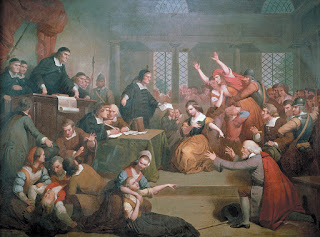 I have been exploring other ways to run the Strange Tales system, thinking of alternative settings. One thing I may need to do is come up with new Character Paths, but it also occurred to me the paths aren't necessarily limited to the Strange Tales setting (Scholar is somewhat specific but you could run a scholar in Medieval Europe with a few tweaks). I came up with a small setting idea called The Granite Hills. It blends the Strange Tales system with the Sertorius concept of grime. The basic idea is a group of Sertori came to New England sometime prior to the Revolution, and one of them turned into a Grim, becoming one with the granite hills north of Boston and causing the whole place to be wrenched from time and space. This is little introduction I wrote for the setting:

New England is mostly as we remember it, and nowhere more so than here near old Saugus. The spiked conifers crawl north along cave ridden hills that conceal the world’s horrors in their steep granite folds. Eastward marshlands stretch to the shores of a dark and foamy sea. South you will find the ruins of that great city, Boston, where the dead walk and rule over the living. But they leave Saugus and Salem in Peace, for we have enough dreadful beasts to contend with. And the horizon is an endless crimson veil that leads to nowhere. For the inhabitants here cannot leave. If you take a ship eastward, you will never reach the shores of Europe. If you head south, no matter how far you walk, you will never cross paths with Jamestown. You may arrive at other, bizarre and distressing destinations, however. Only we, the spiritualists can travel freely through the haze. For you see, it is much as we remember my dear friend, but different in ways you could not imagine, since the terrible events of 1658.

The above was modeled after an old description of the area I found in a book. The setting is clearly inspired by Ravneloft (with Gypsies being replaced by Spiritualists--the area where I live, Lynn was a hub of the Spiritualist movement). And obviously the alternative history here may complicate the plausibility of it being a spiritualist hub in the setting (though the spiritualists I imagine as Vagabonds coming from our world, so it may world: rather than travel by caravan like the gypsies of Ravenloft, the spiritualists travel by trains and possibly hot air balloons. The setting is basically North Shore Massachusetts, and one in which the puritans still have power, where witches are hunted, the supernatural exists, etc.

In terms of system and paths, initially I wanted to make all new paths. But I thought re-skinning or just using the paths presented in Strange Tales might work (provided I make new path powers). But here are some core paths I contemplated:

Sorcerer (these are basically Sertori and actively hunted in the setting)

Spiritualist (probably won't allow this one)

One possibility too was simply making the monster hunters or the inventors freemasons. As you can see, I am still juggling the possibilities here.

Posted by BEDROCK GAMES at 11:09 AM No comments: