This is still in the final stage of development, so I might update the image in the next couple of days if we make any changes, but here is the cover for Arrows of Indra: 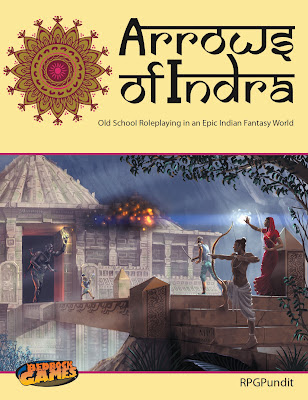 Provided we are not flooded with hundreds of rules questions at once, we will try to answer each question as we receive it. All responses will be posted here (occassionally in video form).
Posted by BEDROCK GAMES at 6:31 PM No comments:

Guide to Aegyptus Available in PDF

Pomponius Mela's Guide to Aegyptus is available in PDF:

Visit the Roman Egypt in 38 AD with famed geographer Pomponius Mela as your guide.

The Guide to Aegyptus is a supplement for use with the Servants of Gaius game. Gamemasters and players will find its contents useful for any campaign set in this unique province.

Posted by BEDROCK GAMES at 8:47 PM No comments:

Bedrock Games is pleased to announce the PDF release of the long-awaited Orlando's Guide to Organized Crime (to be released in print soon as well). This is an excellent sourcebook for any crime-based campaign and covers all the basics: mafia families, the mafia lifestyle, equipment, laws, crimes, other criminal syndicates and managing a successful mafia adventure: 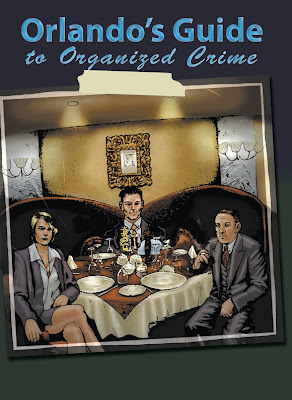 We accomplished a lot of work on Sertorius this week. After months of talk and taking notes we have begun writing the rulebook for our first big fantasy roleplaying game (we already made a small fantasy game when we designed Slayers).

Everything is still in an early stage, but here is what we can say right now:

It is about very powerful beings called Sertori, capable of wielding magic because they were born with a gift. All player characters are assumed to be Sertori because they are tougher than the normal population. However we have options for playing mundane people.

The setting is going to be well developed. We put a good deal of thought and time into establishing the basics of the setting before moving onto mechanical considerations. It is a world where gods walk the earth and magic is a new source of power.

There is a large list of playable races: dwarves, elves, humans, halflings, orcs, ogres, kobolds, and more. The standard races are familiar but new at the same time. We didn't just want to rehash the orcs or elves, but we also didn't want to veer so far away from the familiar that they became unrecognizeable. In our setting elves may be long lived but warlike for example. Orcs may be martial but civilized.

This is a network system game, in many ways similar to Servants of Gaius. The skills from SOG all carried over smoothly (with one or two exceptions). But spells change everything. Characters all have spells and a number of other attributes related to their use.

The spell system is rather interesting. It isn't vancian but it isn't point based either. You can cast the same spell as much as you want all day. But there are built in checks and balances for fully unleashing a spell's potential.

The rulebook will be big: about 190 pages or so. It will contain character creation, spells, combat rules, monsters, world information, etc.

Our aim is to have a playtest worthy character sheet and spell list by the end of the month. Then we intend to playtest the game into the ground. Anyone interested should contact us (as always) at: BedrockBrendan@gmail.com

Posted by BEDROCK GAMES at 4:28 PM No comments:

The Secret of Actium is Ready for Playtest

The Secret of Actium is officially complete and ready for playtest. This exciting new adventure begins with a mysterious murder in Rome at the beginning of 38 AD and uncovers an insidious plot against the empire. It includes points of investigation in three major cities and gives the players the freedom to explore in any way they like.

Posted by BEDROCK GAMES at 8:00 PM No comments: