Just giving an update on the things I am working on.

Adventures presented in the core book lean heavily on investigation and mystery. The assumed adventure structure is Monster-of-the-Week (though suggestions for other approaches are also provided). But I also started work on a small sandbox campaign. This is a little different from what is offered in the core book and probably going to be a PDF or possibly even a blog series, tentatively titled Treasures of the Starlit Inkstone. I would like to put it out in print, but for that to happen, it needs to be 100 pages, and I don't think it will be that large (though that could change as it expands in the coming weeks). Either way though, I am not going to force it to be more sizable than it should be.   Whether it is done as a blog or PDF will be determined by the success of Strange Tales (if the makes enough money for more art, maps, layout and editing, I will do it as a PDF---print if it is lengthy).

The art and maps for the Strange Tales core book are all completed, so once the playtests are done, we will revise and then start editing.

Here is a preview of what to expect:
Sons of Lady Eighty Seven, the sandbox campaign for Wandering Heroes of Ogre Gate is also well underway. We just started on the maps and will begin the art in the fall. The book explores a prefecture in the southern empire where criminal groups and corrupt officials run rampant. The players are assumed to be part of the criminal underworld, but we also built it with players taking a more heroic path in mind as well.

House of Paper Shadows is ready. I just sent the final layout corrections in and we are expecting to have it available in PDF soon, and released in print in October.

On the latest Wuxia Weekend podcast we talk about Chor Yuen's The Enchantress, a 1983 film that blends wuxia and ghosts to interesting effect. It is about a ghost named Shui Tianjiao, who was killed when her husband joined forces with her enemies in a sect war 18-years ago. Now she uses her daughter (born shortly before her death) to get revenge on the entire martial world. 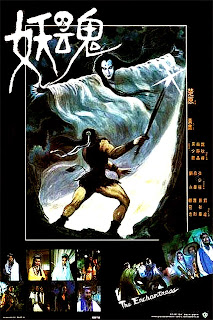 While everyone enjoyed the movie, opinions differed on how good it was. Most of us agreed the strength of the film was its atmosphere and ghostly special effects. The story is good when you understand it, but it could have used more screen time (with perhaps less screen time being dedicated to the near-30 minute final battle). Still it is a very nice mixture of supernatural and martial arts, where it fully commits to both. There are lots of characters, lots of fights, and some very interesting spooky moments.

Unfortunately The Enchantress is difficult to obtain these days (I've only ever been able to find it on VCD). So if you want to watch it, you might have to search around for a good deal. We do recommend it if you like Chor Yuen and want to see his take on Ghosts and Wuxia together. However, if you are not as familiar with Chor Yuen, you might want to start with some of his other films like Death Duel, Web of Death, Magic Blade, Intimate Confessions of a Chinese Courtesan or Duel for Gold.

Posted by BEDROCK GAMES at 12:05 PM No comments:

Last night we talked about Wu Yen, a 2001 film starring Anita Mui, Sammi Cheng and Cecilia Cheung. It was directed by Johnnie To and Was Ka-Fai, and is a blend of mo lei tau style comedy and the supernatural. Anita Mui plays Emperor Qi, who is seduced by Yin Chun (Cecilia Cheung), a fox spirit in love with empress Wu Yen (Sammi Cheng).

Posted by BEDROCK GAMES at 1:18 PM No comments:

On Friday we talked about the 2008 Painted Skin film. It is based on the Pu Songling story of the same name. The story is about a demon who can't pain human skin disguises that allow her to seduce a scholar named Wang before ripping out his heart. The Painted Skin movie elaborates on this, adds characters and conflict, but is somewhat faithful to key elements of the original. You can listen to the entire discussion below. Next week we will talk about the Johnnie To and Wai Ka-Fai movie Wu Yen (starring Anita Mui, Sammi Cheng, and Cecilia Cheung).

You can also listen to our discussion of the sequel, Painted Skin: Resurrection, here:

Posted by BEDROCK GAMES at 9:22 AM No comments:

Tomorrow we are going to discuss Painted Skin (2008) on the Wuxia Weekend podcast. It is based on a Pu Songling story from Strange Tales from the Chinese Studio (you can find a public domain translation HERE, or you can read it in a more recent translation HERE--note: for those interested in the original material I highly recommend the Library of Chinese Classics volumes as well).


This story and the movies had a very large influence on Wandering Heroes of Ogre Gate. It isn't wuxia, but like other tales from the Zhiguai-Chuanqi genre, like A Chinese Ghost Story, modern movie versions often feature very wuxi-like martial arts. Painted Skin (2008) is no exception.  However it isn't the first, or last version.

The original story is about a demon that can paint human skin as a disguise and wear it to appear like a beautiful young woman, an old lady, or, seemingly, anything else it wants. It seduces a scholar and tries to rip out his heart. I won't spoil the details but there is a taoist priest who tries to protect him, as well as his wife who makes a valiant effort to save her husband. It is quite short but packs in a lot of content.

The 2008 version is probably the best known movie adaptation. Called Painted Skin, it stars Vicki Zhao, Donnie Yen, Chen Kun and Zhou Xun. It elaborates considerably on the story, and throws in some great action sequences. The 2008 version also saw a sequel, which took the story in a slightly different direction. The sequel is called Painted Skin: Resurrection, and I definitely think it is worth viewing as well.

There is also a 1993 version directed by King Hu (the director of Come Drink with Me, A touch of Zen, Dragon Inn, and the Fate of Lee Khan). This was, I believe, his final film. It is quite good in my opinion and has a classic horror feel (something you see in a lot of Kung Hu films, even ones like A Touch of Zen). It reminds me of the old silent horror films for some reason.

The earliest version, to my knowledge, is the 1966 Painted Skin (this one is usually referred to as Hua Pi, but that just means Painted Skin). It isn't available in English that I have been able to find, but it is still worth watching to see the depiction of the painted demon.

There are also television versions, like the 2011 Painted Skin and the Painted Skin episodes of the Strange Tales of Laio Zhai 2005 drama series.

As a monster, in an RPG, these work really well. I've made creatures that are directly modeled on the idea (in Ogre Gate they are called Painted Maidens). But I also used the idea for the Glorious Death Cult, a martial sect whose members disfigure their bodies through burning so they can then paint new faces at will.


The hardest part of running these kinds of monsters is knowing when players should be able to see through the disguise. I think there isn't one right way here, but my preferred approach is to disallow passive "Detect" or "Perception" rolls, and only allow a chance to notice the disguise if players actively say they are doing so.

Generally speaking, unless it would be obvious, I am not a huge fan of passive perception rolls. I do allow them, but I like when players engage the setting directly and I think passive rolls tend to discourage that because it is assumed their characters will just notice things. At the very least, I would advise assigning a penalty to a passive roll. There is a world of difference between catching a spider from the corner of your eye because you just happened to notice, and finding one under the couch because you were actively looking. I think the same logic should apply here.

In the latest episodes of Wuxia Weekend we held a discussion to determine our favorite film we've reviewed on the program (it turns out we've reviewed over 60 films). We also talk about Iron Monkey, and finish our discussion of Cobra Kai.

You can support the podcast by contributing to our Patreon (HERE).


Posted by BEDROCK GAMES at 8:19 AM No comments: