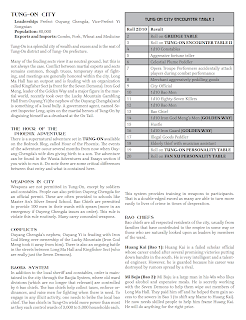 In my most recent Wandering Heroes of Ogre Gate session the players made a Survival Cities roll and failed when they came to Tung-On. So we rolled on TUNG ON: CITY ENCOUNTER TABLE I and the result was a 15, a Hustle. From this encounter a character was introduced to the session who became somewhat important. This was a process of connecting the dots between details that emerged randomly and naturally, and I want to talk a little about how to do that.

I should say, Hustle was probably the one result I didn't want. I had stayed up all night watching a movie and felt a little foggy. Hustles tend to be socially active exchanges and if you aren't on your feet as a GM they can be a little challenging to pull off well. So I opted for a Hustle that would ease into the social exchange, that way I didn't have to immediately jump into a sales pitch or something. I figured someone dressed as a city official asking for peoples passports in order to steal them would work.

The first step was rolling a character. For this campaign I have been using the Bedrock App to do that. I decided to make him level 3, someone who was competent enough to pull off such a con but not so powerful that it made no sense they were relying on it. The result was the following character:

This is just the base stat block generated by the app (with bolding and spacing added for clarity). I didn't add anything and only took away one weapon that seemed excessive. What leapt out at me was the Flowing Stroke technique. That belongs to Relentless Corpse Sect, an organization that one of the PCs has ties to. I decided to connect that dot with the dot of the players being Celestial Plume Masters in order to make the character more relevant. So I thought briefly about the NPCs reasons for using this con on the players.

What I came up with was Leng Ziying was a former disciple of Relentless Corpse Queen, but had provoked her anger. They aren't enemies, but she refused to continue as his Sifu which pained him because he had grown emotionally connected to her like a son. So he wandered, eventually seeking to forget his troubles in Celestial Plume, to which he became addicted. A shell of his former self, he is now obsequious and tricky, relying on stealing peoples passports and selling them at Lucky Mountain Gambling Hall to feed himself and feed his celestial plume habit. I also decided that he called everyone he worked for Boss, to give him a recognizable way of talking (for some reason I found this useful).

That was enough that I was able to run the encounter, but also it gave the character fuel for when the players decided to see if he could be of use to them.

In the encounter itself, Leng Ziying approached the party dressed as a city official, asked to see their passports, talked to them as he examined the slips, then turned and ran away down the road. This led to a chase, followed by a fight, after which Leng Ziying submitted and apologized. The leader of the party realized he could be of use and made an arrangement with Leng to provide them with information and local guidance in exchange for a regular supply of celestial plume.

Now Leng Ziying appears as though he will be a recurring NPC, but its difficult to say where things will go with him. It really just boils down to connecting random details and details that emerge with other elements of the campaign, the party, the adventure, the setting, etc. What is interesting to me with moments like this is a result I didn't want on a table becomes something that adds a lot to a session (if you read the log you can see that this interaction and his subsequent dealings with the party made up a good portion of the evening) and forms into an NPC that is crystal clear to me as a GM.

Posted by BEDROCK GAMES at 9:48 AM