When I run Network campaigns I lean heavily on rulings, extrapolating on existing mechanics to fit the situations that arise. I get quite a few questions about this and it is sometimes a thing I take for granted because it comes up so often in play. This is a series of posts that will talk about specific ways to use rulings, which will hopefully give GMs an idea of how to bend the system to the events that arise during a session. These aren't new rules but approaches to existing rules, though GMs who wish can incorporate them as optional house rules if they want (many rulings become house rules over time).

I thought a good way to do this would be to discuss a hypothetical that recently occurred to me, but hasn't come up in play yet. This way the ruling is one that unfolds more like it might at the table for the first time.

Suppose the players decide to travel through dangerously cold regions. If you have ever lived in an extremely cold environment, you know how dangerous low temperatures can be. In Wandering Heroes of Ogre Gate and other Network systems (from Sertorius to Strange Tales of Songling) there is a skill called Survival, which is used for a variety of things but primarily overland travel. Its chief function is to see how quickly you reach your destination and if you have any complications or encounters along the way. Here is a brief description from the WHOG rulebook: 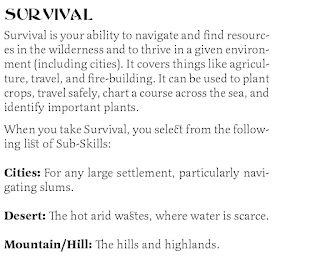 The section goes on to describe more of the sub-skills, followed by using it for things like food and shelter. But the relevant section is for travel: 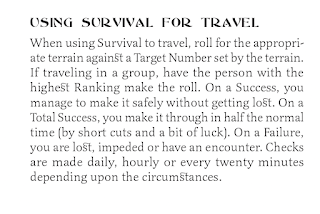 A failed roll typically results in rolling on an Encounter Table. But I think another use of the Survival Roll is to check how well characters handle extreme environments. For example if it is too cold, a failed check could result in 1 wound. I would probably roll again to check for encounter (rather than have the single failure do double duty and both impose a wound and result in an encounter table roll) but that is personal preference. This could also be used for extremely hot environments.
The ruling is taking the Survival Roll and adapting it so they suffer a wound due to temperature on a failure. I would personally retain having this be a single roll by the PC with the highest Survival, but you could have them each roll individually if you think that is more fair.
This can be useful if the party decides to travel to the north through the deep snow and cold. Obviously there could be other approaches to this. This is just one way to handle it. Rulings are not about finding one way, just about thinking through the system logically to come up with the method you think best fits that moment, and it might mean you think of other options to choose from.
For example a GM could forgo wounds if those seems too harsh and instead impose Skill penalties for every failed roll (just keep in mind this can create a spiral effect on the Survival roll itself if you have it affect Specialist Skills, so it might be best to simply have it impact physical skills, and possibly combat skills). You could even have it progress from skill group to skill group, starting with Physical skills till those reach -3d10, then advancing to the next logical category and so on.
Something I generally do when I make rulings like this is I explain what I intend to do and why, so the players know going in what to expect. This also gives them an opportunity to weigh if they want to object to the ruling and propose an alternative. For me what is important we come up with a mechanical solution all agree reflect what is going on in the game itself.
You should also tailor your rulings to taste in terms of complexity. The first approach of taking a wound, is a very straight forward and simple solution, while the second one is more involved. You should do what makes most sense to you in these moments.