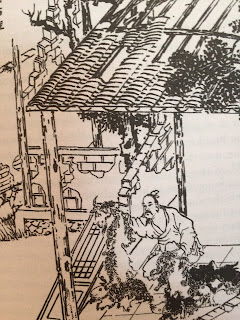 Doctor Five Hides is a simple story of a doctor who dreams that he is called Five Hide and then takes warmth one night using five hides of sheep skin. I decided to elaborate a lot on the concept.

Butterfly is about a pleasure-seeking man named Luo Zifu who indulges in all the local brothels until he catches syphilis and ends up a beggar. Eventually he is helped by a beautiful woman named Butterfly, who brings him to her cave grotto and cleanses his sores in her healing waters, curing him of his illness. They become lovers and he meets her sister, Flower. He and Butterfly Have a son and he remains in the grotto with her for years, returning to his family when his son is old enough. When he and his son try to find the grotto again, it seems to be gone. For this one, I decided to use the story as a red herring for the real adventure, a group of man eating Toad Demons.

THE FIVE HIDES OF PHYSICIAN CHANG
Physician Chang cares deeply for his patients and would do anything to help them. He specializes in a strange form of medicine that uses the skins and hides of other animals to boost the health of the ill. Usually these skins are just taken from animals, but lately he has begun practicing on human skin because it proved particularly effective against certain hard-to-treat illnesses. He hasn't told anyone about his use of human skin. Initially he limited himself to taking the skins of the wicked but he discovered that different personalities impart different properties to the flesh. So he has become less particular about whose skin he steals, provided it can save his patient.

THE SKINS OF PHYSICIAN CHANG
These are blankets made from the skin of humans. Physician Chang can also make them from animals but finds human skins more effective. Worn for the night, they produce a beneficial effect. However there is a 1 in 10 chance that the user becomes haunted by a DREAMING GHOST.

Filial Skin: The skin of the filial is particularly useful at healing and can even restore a bit of health to the bones. Placing this skin on the patient overnight heals them of all wounds suffered and raises their Hardiness by 1 (this can only be increased once per year).

Merciful Skin: This cures poison by drawing it out until the skin is purple. If worn for the night it can cure: Hellbore, Fire Poison, Naga Venom, Purple Spirit Venom and Spiny Toad Venom.

Wise Skin: This can eliminate a demon flaw if worn for the entire night. Unfortunately this only seems to work if the wise person is known to and has a deep personal connection to the patient.

Cunning Skin: This produces mental clarity and eliminates a Mental Affliction if worn for the night.

SKIN RITUAL OF PHYSICIAN CHANG
With this ritual, you can transform the skinned hide of a human being or animal into a treatment for illness. Use the above examples as guidelines as each skin is unique based on the type of creature and the character of the individual it is taken from. Once you have the skin and have treated it (with Trade: Hide TN 6) you can prepare a special oil made from numinous mushroom, Zhen Bird blood and fourteen other ingredients. Make a Ritual Roll TN 8. On a Success you produce a hide with healing properties that works once unless otherwise stated.

THE CLEANSING WATERS OF BUTTERFLY GROTTO
This mountain grotto is known for its beautiful white stones and waters that can heal any disease or affliction. According to legend, it is inhabited by a beautiful fox spirit named Butterfly, who will lend her waters to any man she finds sufficiently handsome or charming. In truth these rumors are a lie spread by the Toad Demons who reside here. The created the rumors to attract men to their grotto so they could eat them. Even the healing powers of the waters are greatly exaggerated, they can cure Malignant Wind Disease, but nothing more. There is a village at the base of the mountain below the grotto called Bao Hu. The people there worship the Toad Demons and tell travelers tales of the Fox Spirit Butterfly to help lure them to their gods.

BAO HU VILLAGE
Headman: Shen Shu
This small village of 120 people doesn't want for anything. The nearby lake teems with fish, the locals woods have plentiful game animals, their orchards burst with citrus fruits, and their rice fields yield abundant harvests with little effort. This is all thanks to the Toad Demons from Butterfly Grotto (whom they worship).

The village is loyal to the Toad Demons and lies for them. They maintain the pretense that a Fox Spirit lives at Butterfly Grotto and even have a local shrine dedicated to her. However if anyone looks closely at the large shrine figure of the fox spirit Butterfly (Detect TN 9) they see cracks in its surface. Breaking open the statue reveals the fox to merely be an outer shell, with a toad figure buried inside.

The villagers will help people plan an expedition to the grotto, giving them made up advise on winning the heart of the fox spirit.

TOAD DEMONS OF BUTTERFLY GROTTO (4): SHUI, HUA, MIN AND LULI
The Toad Demons of Butterfly Grotto are four siblings who love to eat humans expertly prepared by their human servants but will settle for dining whole if they must. The Toad Demons are led by the senior sister Luli, who devised an ingenious plan by planting rumors of a beautiful Fox Spirit who lives at the Grotto and lends its healing waters to men who win her heart. The Toad Demons are worshipped by the people of nearby Bao Hu village and are helped by the villagers in their schemes.

The power of these Toad Demons is immense. Though their strength through worship is divided by the four of them, they are all tough to kill and deadly. They have 10 human servants at the grotto who know how to cook very well.

Defenses: Hardiness 6, Evade 6, Parry 7, Stealth 7 (10 water), Wits 8, Resolve 8
Key Skills: Tongue Attack: 2d10 (Special), Ram/Squash: 3d10 (6d10 Damage), Grappling: 2d10, Speed: 4d10 (70 feet), Fly: 3d10 (60 feet), Muscle: 6d10, Detect: 2d10, Command: 3d10, Persuade: 2d10, History (All): 3d10
Max Wounds: 42
Powers
Swallow: On a Successful Tongue attack the Toad Demon can swallow a person. Every round spent in a Toad Demon’s stomach does 1 Automatic wound to the person inside. To cut through, one must do enough damage to kill the Toad Demon. Climbing out is possible on a successful Athletics Roll (TN 10).
Ram/Squash: A Toad Demon can ram or squash people by leaping onto their bodies for 6d10 Damage.
Shape Change: Toad Demons can take human form but always appear sick and ugly when they do so. In addition, they have their natural giant toad form, but can also change into a small toad if needed.
Immunities: Toad Demons are immune to all normal Attacks. They only take Damage from Kung Fu Techniques Qi level 3 or greater that involve energy Attacks (normal Kung Fu Techniques do no harm to them). Weapons that are cheaply made and rusty can do normal damage against them.
Bestow Luck: Toad Demons can bestow luck on individuals or entire communities. This is usually a small +1d10 bonus to any Skill for a given activity (for example +1d10 to Survival for harvesting rice or +1d10 to Melee Attacks against Crocodiles).


Venomous Skin: The skin of a Toad Demon is poisonous and similar to Spiny Toad Venom (except it has a potency of 3d10 instead of 1d10). Touching the flesh of the Toad Demon is enough to expose people to it. But anytime a toad demon takes a wound from an attack that cuts its flesh, people in the immediate area (within five feet) are potentially exposed as the venom is released into the air. Roll 2d10 against the Evade of all within that area to see if they are exposed.
Posted by BEDROCK GAMES at 10:06 AM