Princess Lotus is one of the most surprising stories in the book. It immediately grabs your attention with mysterious details and developments, and the ultimate explanation is so unexpected but also perfect. I think it is better to read the story and be surprised, so if you plan on doing so, I recommend avoiding the following synopsis. 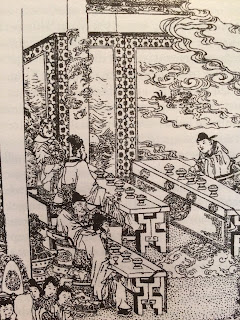 In Princess Lotus a man named Duo Xu keeps getting brought as a guest to a neighboring palace of a great king. It is all very surreal but upon arrival he sees a dizzying landscape of pavilions and servants. The king is enthusiastic over their growing friendship and offers his daughter, Princess Lotus, as a bride. Eventually the man accepts but only after it becomes clear these regular visits are probably just dreams. During the wedding catastrophe strikes and the kingdom is attacked by a 10,000 foot long serpent. The king begs Xu to flee with Princess Lotus, and the two make their escape after hearing a report that 13,800 of the subjects have been killed by the attack. At his home, Princess Lotus begs Xu to build a palace for her father and his people. At first he believes this impossible but he wakes up to realize it was all a dream, yet three bees remain buzzing near his ear. He is convinced by friends to build a hive for them, which he does, and the bees flourish. Later he looks for the original hive and finds it empty with a python inside.

The Girl In Green is about a man named Yu Jing who is seduced by a woman in green while he stays at the Temple of Sweet Springs. They make love but she is fretful before leaving, dreading that something awful awaits her beyond the door. She begs him to walk her out and he does so, but as he turns back to his abode, he hears a scream and rushes out to find her, only to see a hornet caught in a spider web, about to be devoured. He brings the wasp inside, and it crawls over his inkstand, scrawling the words "Thank You" in ink.

Duck Justice is about a man who steals and eats another person's duck, then finds his skin itches immensely. He then grows feathers and learns he must let the wronged party verbally abuse him to be cured.

In Big Sneeze a man with a chronic sneeze, sneezes and releases four creatures that look like clay dogs. They begin to devour one another and grow until the last remaining one is the size of a squirrel. It then climbs up his leg and claws its way into his body, imbedding and looking like a growth.

Steel Shirt is about a man who practices a style of Kung Fu that makes his body impervious to harm. He has a log smashed into his belly, and even hammers his own penis to prove the effectiveness of his technique.

Because I actually have a module coming out with Wasp Demons as a featured villain, I decided to take a much different approach to the spirited hornet and bees in this one.

Also, this series is getting close to the end. There are 104 entries in the Penguin edition of the book (the original version and some translations have more than this). So this is meant more as an overview of the feel of Pu Songling. But when this is completed I will post a variation on Ogre Gate we've been working on meant to capture the feel of the Strange Tales.

SPIRITED DREAM BEES
Spirited Dream Bees look and act like normal bees during the day. They are rare among spirited creatures in that they seem to have no visible supernatural abilities. However they are unusually long lived and they can enter the dreams of anyone within 200 yards of their hive. When they do so, they appear like normal humans and their hive seems like a great palace (for the person is the size a bee without realizing it in their dreams). Some Spirited Dream Bees are benevolent, some are malicious, but they all use this dream ability to direct nearby humans toward actions beneficial to their hive.

Powers
Dream: On a Successful Deception Roll against Wits, Spirited Dream Bees can cause a nearby human to perceive them and their brethren as human, and enter their dreams. When they enter a person's dream they can interact with that person as though they were real. The individual is the size of a bee in the dream, but doesn't realize it. The target can make a Detect Roll TN 10 to discern something is a miss, but the most they learn from this is that things feel odd. If the human goes to the bee's hive, it seems like a many-pavilioned palace.

*This is due to their speed and size, and thus their difficulty to hit, not any ability to block or parry blows.

SPIRITED HORNET
Spirited Hornets look like beautiful women but their true form is a giant winged insect capable of eating a man. They paralyze their prey and devour the flesh. If they choose they can also take the form of a swarm or a single tiny wasp.

Powers
Swarm: When the Spirited Hornet turns into a swam she can engulf targets and deliver 1 wound each round she remains on them unless they make a TN 7 Athletics Roll to get away. In this state she can only be harmed by energy attacks.

Paralytic Sting: The sting of the Spirited Hornet paralyzes Targets on a Total Success. This paralysis lasts 1d10 Minutes.

Bite: The bite of a Spirited Hornet does 6d10 Damage. Every 20 humans they eat increases their max wounds by 1.

Shapechange: Spirited Hornets can take the form a beautiful woman, a large hornet, a small hornet or a swarm.

FOOD PROTECTION (NEW RITUAL)
You chant over your food giving it a protective aura that only you can sense. If anyone eats your meal without at least your tacit permission, they begin to suffer a terrible rash within an hour. This imposes -1d10 to all Physical Skills for 1d10 hours and is very uncomfortable as feathers begin to grow from the flesh. Unless the target apologizes formally, to the Ritual Master, he will remain a feathered monstrosity.

THE CLAY CURSE (NEW RITUAL)
This ritual requires hair from the target and an amount of clay the size of a hand. As you mix them the target feels an itching in its nose and sneezes out a miniature clay beast (see blow), which will immediately attack the target and try to affix to its body. After this time, you can see and hear through the creature, you can also speak through it if you wish.

MINIATURE CLAY BEAST
This creature at first begins as a small ball of clay sneezed out the nose. Then it grows instantly into a rodent-sized creature resembling a demonic dog. It has sharp claws and teeth which it uses to burrow into the victim's body and permanently affix itself to them.

Powers
Scurry: Miniature Clay Beasts are small and fast and can quickly evade any attack. Roll 2d10 against the attack roll. On a success they evade both melee and ranged attacks.

Burrow and Affix: When a Claw Beast attacks with its claws or bite and does a total of 2 Wounds in a single round, it affixes to the target permanently. In this state it resembles a growth with eyes, a mouth and tiny nose on the surface of the flesh. It can be removed by cutting but this automatically inflicts 5 wounds on the target plus 3d10 Open Damage.

This Technique requires 1d10 months of training to harden as much of your body as possible against attacks.

While in Steel Shirt Stance you can only move 5 feet at a time and must keep your arms flexed at your side and knees slightly bent. When you take the stance your entire body, except for one small section becomes so hardened it takes two consecutive Damage rolls to do any harm to you. However there is one vulnerable place (a section of leg, the groin, the head, the belly, etc) that is exceptionally vulnerable to attack. Any successful attack against that point requires no Damage roll and does 3 Extra Wounds. This weak point is permanently set the first time you use the technique.