GAMING STRANGE TALES FROM A CHINESE STUDIO 46-48: THE GIANT FISH, THE GIANT TURTLE AND MAKING ANIMALS 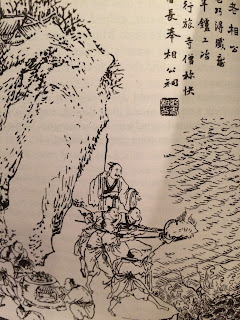 These ones are all pretty short. The Giant Fish is about massive mountains jutting from the sea that are really just enormous fish who have some to honor their ancestors. The Giant Turtle is about a Turtle Demon who kills a man's family. The man then tries to find an ingenuous way to kill it (against the warnings of local buddhist monks). For both of these I felt making creatures based directly on the descriptions made the most sense.

Making Animals is a very interesting story about a man who goes to an inn with some donkeys. They drink from the local pond and turn into women. This is apparently the work of a local sorcerer who dies under torture later. I decided to make another inn scenario based around it.

This is another dangerous Inn. Unlike the one in my previous entry, the Jade Pond Inn is a real inn, not a phantom inn. The landlord of the inn is Gu Yuan. He is an alchemist and cannibal but cannot bring himself to kill a living human being. He merely prefers the taste of human meat (a tendency he developed after a visit to the Silk Tavern in the Banyan). Therefore he used his knowledge of transformative alchemy to alter the properties of nearby Jade Pond. Now any animal that drinks from it becomes a human, which Gu Yuan captures and saves for later butchering. Any human who drinks from the pond becomes an animal.

People inevitably drink from the pond turning into animals and Gu Yuan has to help transform them back into human form. He explains to such people that the pond is cursed. He thought of putting a sign up but would prefer not to attract attention to it.

The Inn: Inside this looks like a normal two-story inn. There is a common dining area, a door leading to a kitchen, and a set of stairs leading to rooms above. In the kitchen there are cages filled with 1d10 humans (all formerly animals). These cannot speak and their mouths are gagged. They are to be cooked for the patrons dinner.

Jade Pond: This is a clear blue pond about 75 yards from the inn that looks bereft of life. The water tastes clean upon drinking but transforms any animal into a human, and any human into an animal. There is a 2 in 10 chance that a wandering donkey, pig, ox, lamb or chicken is nearby. There is a further 50% chance it is human, and 50% chance it is just a regular creature of its kind.

GU YUAN
Gu Yuan is a Yen-Li sorcerer who enjoys eating human flesh but hasn't the heart to harm a real human. Therefore he created the Jade Pond to transform animals into men, so he could eat them instead (the morality was still questionable in his mind, but ultimately he was able to justify his actions to himself). He always makes a point of helping any humans who accidentally get turned into animals. Gu Yuan is a skilled chef as well, skillfully prepares human meat in the dishes served at the inn. This serves two purposes. First it forces anyone who eats there to be his co-conspirators, so if they find out about the pond, he can hold that over their heads. Second, people seem to like it, and his Crispy Pork bowls are top sellers.

TRANSFORMATIVE POND (NEW RITUAL)
This ritual uses external alchemy and Yen-Li magic to transform a small body of water, such as a pond. The ritual requires the crushed bones of a Longzhi, the crushed bones of a Shen Bird, fragments of starlight, and a worm that has feasted on jade for two years. The caster then makes a Ritual Roll TN 8. On a Success the pond or body of water transforms specific kinds of creatures into other kinds. The caster can select which two types (for example Human and Animal). When a creature of one type drinks the water, it transforms into the other type, and vice versa. So in this case a human becomes an anima, while an animal becomes a human. This transformation does not alter one's memories or knowledge. Animals transformed into humans behave like animals and can't speak. Humans transformed into animals, feel like humans but will have difficulty conveying their condition to people.

TURTLE DEMON
The Turtle Demon is a terrifyingly giant turtle, the size of a boat. Its face is jagged and its snapping jaw can take a man's head in one bite. It often drowns its enemies by creating enormous waves to capsize boats. The turtle Demon cultivates by eating peoples skulls. It resides in rivers and along the coast.

Tidal Wave: The Turtle Demon can create a huge wave of water, enough to overturn a boat or even drown people on land. Make a Swim Roll against the Evade of the vessel or the people on land. On a Success the ship is overturned and/or the people on land are submerged in water and must make Swim rolls to avoid drowning. This can affect a 100 yard area.

Bite: The Turtle Demon's enormous jaws do 7d10 damage and decapitate anyone killed by that about.

Shredding Sands: The Turtle Demon can release an 80 foot cone of sand that shreds anyone caught inside as a free action. Roll 3d10 against the Evade of all affected. On Success they take 1 Automatic Wound, plus suffer a -1d10 to Detect for an hour. On a Total Success the target’s are blinded for three rounds.

Shell: The demon Turtle's Shell is incredibly tough, giving it a 10 Hardiness two consecutive successful damage rolls to do it harm.

Weakness: The Turtle Demon is susceptible to heat based attacks. Its Hardiness is treated as a 5 for heat attacks and it takes 2 Extra wounds from heat sources.

FILIAL MOUNTAIN FISH
These giant fish are easily mistaken for mountains. They rise from the ocean like earthly peaks. However they move and devour entire ships. They are generally friendly and will not harm people, unless provoked. Unfortunately because they are often mistaken for mountains, more than a few men have prompted an attack foolishly exploring their backs and trying to dig beneath the surface.

Filial Mountain Fish greatly revere their ancestors and believe the mountains on the coast are the resting places of their parents and grandparents. They frequently come to shore and remain to make offerings. This can last for weeks at a time. Some Filial Mountain Fish have been known to remain in one spot, mistaken for a local mountain, for centuries mourning a father or mother.

Defenses: Hardiness 6, Evade 6, Parry 7, Stealth 10, Wits 5, Resolve 10
Key Skills: Bite: 4d10 (6d10 Damage plus special), Spines: 3d10, Ram/Squash: 1d10, Grappling: 2d10, Speed: 4d10 (70 feet), Muscle: 6d10, Detect: 2d10, Ritual (Ancestor Veneration): 3d10
Max Wounds: 65
Powers
Swallow: On a a successful bite they can swallow people or ships whole. Every round spent in their stomach does 1 Automatic wound to the person inside. To cut through out from inside, one must do at least 20 wounds to its flesh. Climbing out is possible on a two successful Athletics Rolls (TN 10).
Ram/Squash: They can ram or squash people by leaping onto their bodies for 6d10 Open Damage plus 4 Extra Wounds.

Posted by BEDROCK GAMES at 7:46 AM