GAMING STRANGE TALES FROM A CHINESE STUDIO 63-64: CUT SLEEVE AND THE GIRL FROM NANKING 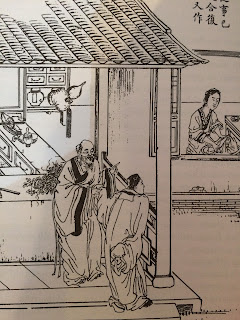 Cut Sleeve is about a man named He Shican who falls in love with a young male fox spirit named Huang. He begins to waste away when his affection is not requited and the fox spirit denies him because he is afraid of causing harm (sex with fox spirits enervates people and can kill them). However when he sees the state Shican is in, he relents and the two begin to make love regularly. Though Huang's true nature isn't yet revealed, it is hinted at when Huang asks Shican to procure a strong bolus pill for him many times in a month (a medication that is usually given with far less frequency). Eventually the relationship with Huang causes Shican to grow sick. Huang tries to nurse him to health but it is too late and he dies. The moment he dies, a local censor from Tiaoxi, who has been hounded by a corrupt governor he once accused, dies at the exact same time. The censor awakens and declares himself to be Shican. He and Huang are re-united but this time the fox spirit convinces him to marry his cousin, and removes the governor as a threat by becoming the man's lover (which causes the governor to waste away and die as well). Huang takes all the governor's wealth and then lives in splendor with his family.

The Girl From Nanking is about a man named Zhao who meets a sobbing woman on the road. She tells him her husband is dead and he takes her in. She stays with him for nearly three years, mainly doing chores. And at the end of that time, she says she must return to her father's apothecary shop in Nanking. Before she goes she tells him to go there one day with some herbs, for which they will repay him. One day he goes to visit her and her father immediately recognizes him as his son-in-law and invites him in. But the woman is noticeably more business-like. She takes his herbs and declares his luck is thin, saying if they give him too much, he will spend it, so she gives him a little money and a list of prescriptions. He returns home and finds the prescriptions are quite profitable. She isn't explicitly labeled a Fox Spirit, but it seems quite likely that she is one.

For this entry I decided to make Foxes modeled after the ones in the two stories. I also used this as an opportunity to make some optional rules and conditions. I quite like having so many variations on Fox Spirits. I think it is better than having a single type for all time. It makes things less predictable in the game.

WASTING FOXES
Wasting Foxes are like other Fox Demons in appearance, except they are handsome men. A Wasting Fox spirit's love can be lethal. Sleeping with them or merely longing for them, can cause a wasting sickness that affects the kidney meridians and eventually leads to death. Wasting Foxes however are kind and usually only unleash such harm on people they consider truly deserving of it, or people who are willing to die for their love.

Love Enchantment: The true form of a Wasting Fox is a fox, but to most people they look like attractive men. The sight of themcan fill anyone attracted to a man with powerful love. It can also fill anyone not normally attracted to a man with powerful love (though the likelihood is smaller). Anytime a person attracted to men first sees the Wasting Fox, roll 4d10 against Resolve (if they are not normally attracted to men, roll 2d10 against Resolve). On a Success they are in love. From then on roll 4d10 against Resolve for five days to see if they remain in love each day. If they remain in love for five days, they get Wasting Sickness. Any Total Success results cause two consecutive days of love before you need to roll again.

HERBAL FOX
Herbal Foxes are fox spirits who take human form and occasionally do good deeds as repayment for kindness. They are generally very business-like and fair. While their love can enervate a man like other Fox Spirits, they feed off of kindness (and rarely indulge their enervation abilities). They have a strong sense of Karmic debt and will repay acts of kindness in equal measure. Toward this end they can sense an individual's Fate and their karma.

Stride: Herbal Foxes can vanish into thin air and re-appear anywhere they wish on a Successful Places Skill Roll.

Enervate: The love of an Herbal Fox is enervating. Anyone who has sex with them, loses 1 Hardiness and then must make an Endurance Roll TN 7 the following day or lose another.

Feed: Herbal Foxes feed off kindness and goodwill. This doesn't do any harm to the person being kind, but it may take their time and resources. A year of kindness to an Herbal Fox increases their Max Wounds by 1 permanently. However, they always feel compelled to repay this kindness.

WASTING SICKNESS
Anyone who falls in love with or sleeps with a Wasting Fox can begin to suffer from Wasting Sickness. Roll 4d10 against Resolve. On a Success the person is affected. This causes the body to die slowly, as the character loses 1 Hardiness a week permanently. This cannot be stopped by any means short of god-like intervention. When the target reaches 0 Hardiness, he or she dies.

THIN LUCK (NEW FLAW)
Anyone with Thin Luck has a set amount of good fortune for them determined by heaven. This cannot be changed. This is a particular sum of money that, once exceeded, the person is meant to gain no more. From that point on it will be difficult for them to hold onto any additional wealth. In game terms this is expressed as a +2d10 Bonus to Skill rolls against the character that are made with the ultimate aim of taking their money. This would mean bandits get +2d10 to their attack rolls against the character, thieves get +2d10 to their Talent (Theft) rolls, etc.

LIFE AFTER DEATH (OPTIONAL)
Using this rule, when a character dies, there is a flat 1% chance that someone else in the area with a stronger will has died exact same moment and inhabits the character's body. To those present, it seems the character has simply passed out for a brief moment. Any lethal injuries are no longer life-threatening (the character is Incapacitated but not dying). When this happens, inform the player of the dead PC (if it is a PC) in secret. Give them a small note with the name of the spirit who now inhabits their character, its goals, its personality, etc. The PC should change his or her Wits, Resolve, Mental Skills, Knowledge Skills, and Relevant Trade Skills to reflect the Skills of the possessing spirit. The character otherwise keeps his regular Skills and Defenses. Often the spirit has a very specific goal it hopes to achieve.