GAMING STRANGE TALES FROM A CHINESE STUDIO 55-56: KING OF THE NINE MOUNTAINS AND THE FOX OF FENZHOU

King of the Nine Mountains is about a scholar official named Li who rents out his garden to an old man only to find he's invited a family of thousands of fox spirits into his home. He resolves to kill them and uses saltpeter and fire to burn the creatures. The old man is outraged and vows revenge for the deaths of his fellow foxes. Years later Li encounters a fortune teller who tells him he has the mandate of heaven, and offers to help him lead an army to take the throne. He wages a rebellion against the Empire with the help of the fortune teller (who becomes his marshal). In the end it turns out the marshal is the vengeful fox spirit, setting him up for a fall. 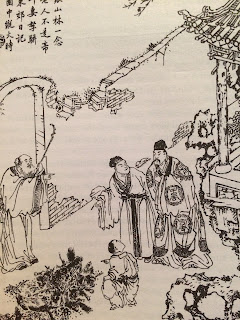 The Fox of Fenzhou is another story about a fox spirit, but this time it falls in love an official named Zhu and the two have a relatively happy life together. However Zhu is promoted and then must go to mourn his mother when she dies. To reach his mother he must cross a river and it is explained that the fox is unable to cross bodies of water. It seems the lovers are going to have to part, when the fox is able to persuade the local river god to let her pass.

I added in headers separating the content by story this time. That way it is easier to see where the ideas are coming from. This doesn't mean they are pure models of the material. In some cases I just took inspiration and went a different direction to fit it to the setting or make it more interesting. However with King of Nine Mountains, I made a direct translation into game mechanics. I simply decided to continue the Fox Marshal's tale beyond his initial revenge (which is what the story deals with) and turn him into a figure roaming the setting.

THE KING OF NINE MOUNTAINS
THE FOX MARSHAL
Not all Fox Spirits desire only to feed or to love, some have lost family and loved ones to the cruelty of man. When this happens they burn with a desire for vengeance and use their powers to wage war against humanity. The Fox Marshal is one such Fox Spirit. His entire family was killed by a wicked scholar named Li. Years ago, The Fox Marshal and his family of thousands had moved into a wing of Li's residence for 100 taels. Li discovered they were Foxes and burned the whole clan with hundreds of pounds of saltpetre. The Fox Marshal bided his time and returned to the man in the guise of an astrologer, claiming he was destined to rule the empire. He then raised an army of thousands and became Li's Marshal, all with the aim of abandoning Li as he was on the brink of victory. As a result all of Li's family perished by execution.

Satisfied with his revenge, but still burning with rage, The Fox Marshal realized he still had an entire army at his command. Now he leads his group through the land, razing villages, conquering cities and basically doing whatever he can to inflict misery on humanity. He often remains in one conquered place for months, before growing bored and moving to the next target of his vengeance.

Misleading Voice: The Fox Marshal can convince men of his lies and earn their loyalty by saying what he believes they want to hear. This power can work on whole groups of men, even armies, at a time. To Convince People, make a Deception Roll against Wits. On a Success what he says seems obviously true to the target (s).

Compelling Voice: He can also use his voice  to impel people to take action, but it only works on those with no cultivation (anyone with ranks in Qi is immune). Roll Command against Resolve. On a Success he can cause all affected to take a desired action in the next day. This could be anything from going to war to having a drink at the local wine shop.

Forms: The Fox Marshal can take human form, or the form of a Fox. He can also grow claws or teeth as needed for attacks.

Houses of Splendor: Even in a small space, Fox Marshal can create intricate and comfortable living spaces. He can spring forth a whole miniature city with his mind. This enables him to provide luxurious accommodations for his men on the road. To do this he needs an enclosed space, such as a cave, a courtyard, a small glen. Then he can produce any accommodations he desires within the enclosure. To use this ability he must make a Trade (Architecture and Engineering) TN 7 Roll.

Saltpetre Vulnerability: Fox Marshal is vulnerable to saltpetre. The substance does 1 Extra Wound when used in any attack against him. Any use of Divine Fire does 2 Extra Wounds against him.


Weapons: Qiang (2d10 Damage or 0d10 Damage), Leather Lamellar (-1d10 Damage against blunt weapons)
THE FOX OF FENZHOU
TAN LAN THE GOD OF SOUTHERN FEI RIVER
Tan Lan is said to be a kindly old man who regales local orphans with his stories by the river. However in truth he is a greedy and avaricious river god. The orphans he speaks to, slowly turn into dragons as he tells his tales. He then sends them into the river to collect gold and treasure from hapless travelers. He can be kind when he wishes and will respond to offerings of wealth by keeping his waters calm, letting landbound fox spirits and other creatures pass, and providing ample water during drought.

Key Kung Fu Techniques (Dianxue 3, Qingong 3):
Tan Lan knows all Dianxue and Qinggong Kung Fu Techniques
Profound Techniques: Celestial Seal, Great Transference, Ride the Cloud, Sleeves of Frost, Roar of the Dragon, Wave of Frost
Powers
Beast Strength (x40)
Bite: With his enormous jaws in Dragon form he can bite up to 8 targets at a time with a swooping attack, doing 6d10 Open Damage.
Smash: His body can slam into buildings and crowds, covering a 150 foot long and 10 foot wide area. Roll 4d10 against Evade. On a Success anyone hit takes 4d10 plus 3 Extra Wounds. On a Total Success they take 6d10 plus 4 Extra Wounds.
Immunity: Tan Lan can only be harmed by Kung Fu Techniques, Profound Kung Fu Techniques, and Immortal Powers. However, he can never be permanently killed (this requires a decree from the Enlightened Goddess). If he takes 61 Wounds he vanishes and reappears in one day in the Enlightened Goddesses’ Court.


Regeneration: Tan Lan regenerates 1 Wound every round.
Control River: Tan Lan has complete control of the river. He can cause the waters to flow with great speed, increasing the Swim or Sail to TN 10 or lowering it to TN 1. He can also control local weather near the river, creating rain, wind or small storms.
Transform Orphans to Dragons: Tan Lan takes pity on orphans and views them as his children. When he speaks to them, roll Persuade against Resolve. On a Success any orphan (no matter how old) turns into one of his Little Dragons forever.
Change Form: Tan Lan can take the form of an old man or of a great river dragon. In his river dragon form he can bite with tremendous force and smash the land around him.

TAN LAN'S LITTLE DRAGONS
Tan Lan's little dragons are easily mistaken for crocodiles but they are actually small dragons. They were once human orphans who were transformed by the river god into their present state. Now they roam the Southern Fei River in search of riches for Tan Lan. When they see anyone with wealth or valuables, they attack and steal them.

LANDBOUND FOXES
Landbound Foxes are usually affectionate and kind toward humans, draining them but not to the point of death. Therefore they are less out of favor with the gods.

Enchanting Form: The true form of an Landbound Fox is a fox, but to most people they look like beautiful women. Anytime a person first sees the Landbound Fox, roll 4d10 against Wits. On a Success the target only sees a beautiful woman. On a failure the person sees a trace feature of the fox's real form (a bushy tail, yellow eyes, whiskers, etc). This is brief, as the Landbound Fox can roll 4d10 against Wits immediately to restore the illusion in the person's mind. Once an Landbound succeeds against a target, they will always see her as a beautiful woman unless they actively attempt to check for evidence to the contrary (in which case another roll is called for).

Favored: Rituals and magic that normally affect Spirits and Demons suffer a -2d10 Penalty against Landbound Foxes. They also gain a +2d10 bonus to break out of any magical containment.

Petition: Landbound Foxes can use Divination to petition local deities for an audience.