GAMING STRANGE TALES FROM A CHINESE STUDIO 49-51: THE LITTLE MANDARIN, DYING TOGETHER, THE ALLIGATOR'S REVENGE 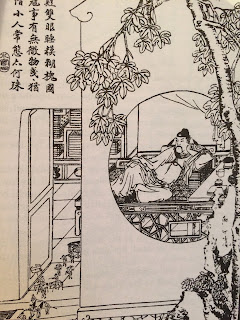 This entry I do The Little Mandarin (#49), Dying Together (#50) and The Alligator's Revenge (#51). The first story is about a sleepy scholar who sees a procession of tiny officials coming to present him with a bundled gift. Dying Together is about a man who dies but comes back to life so he can bring his wife with him to the next life. He then persuaded his wife to lay down and join him. After she does so, seemingly to humor him, she passes away. The Alligator's Revenge is about a captured alligator that escapes and creatures a huge wave to capsize his captor's boat. It also spends a bit of time talking about the nature of alligators.

For the Little Mandarin I decided to make a god-cursed official based on the story. I like bringing in the gods to my campaigns every so often so this seems an interesting way to reward the good and express the heaven's displeasure at the bad. Keep in mind this is going to be based on the PC's Karma ratings and I don't think anyone with ranks below 8/-8 would warrant a visit from Qin Yu.

For Dying Together I thought some ghosts or undead that pull you into the next life with words rather than physical attacks would be interesting. For The Alligator's Revenge I went with making an Alligator Demon, largely because I needed one. The WHOG game has different rules for Alligators and Crocodiles (I will try to do a Crocodile Demon as well by the end of this). That entry had some odd lines it, which I chose to read fairly literally. I am not sure if this was just a translation issue or not. The Alligator Demon's powers are largely based on those.

ALLIGATOR DEMON
Alligators are often mistaken for dragons or river gods and worshipped by locals. They do not benefit directly from such worship but will gladly take human sacrifices from such people and give their protection in return. Alligator Demons survive on human meat, without it they begin to die.


Alligator Jaws: Alligator Demons have wide suited for breaking through shells and other hard forms of protection. This imposes a -3 on the Hardiness of any creature they bite.
Feed: Alligator Demons must eat human flesh to survive. If they do not eat a human body for an entire month, they begin taking 1 wound every week. When they eat, they recover their health. They must also eat to heal themselves when damaged.
Drowning Breath: Alligator demons can unleash a plume of mist from their nostrils that forms into a drowning rain. Roll 3d10 against the Evade of everyone in a 100 yard radius. On a Success those affected begin to drown (WHOG, 83). This can be performed as a Move by the Alligator.
Boiling River: The Alligator Demon can generate powerful dragon energy that causes the water around it to boil. Roll 3d10 against the Evade of anyone in a 500 foot radius who is in the water. On a Success they take 5d10 Fire Damage.
Flying: Alligator Demons can fly, but unlike Flying Crocodiles, they can only move horizontally up to 3 feet over the surface not vertically.

THE PERSUASIVE DEAD
The Persuasive Dead are those who have died but briefly returned to life because they want to take others with them. However they are polite about the matter, never forcing anyone to join them in death. Instead they persuade and serenade, lulling people into the arms of death with their uncanny words or song.

The Persuasive dead are not particularly tough, but they cling to life by will to bring others with them. They usually die in one or two blows.

Powers
The Beauty of Death: The Persuasive Dead can paint death as a beautiful dream and describe life as an endless chore, causing people to take their own lives. Roll Persuade against Resolve, on a Success, the target attacks themselves with a Mundane strike or weapon attack. On a Total Success the target attacks themselves with one of their lethal Kung Fu techniques.

Deadly Melody: The Persuasive Dead can sing or play an enchanting melody that makes death feel like a welcome slumber. Roll Talent (Singing) or Talent (Instrument) against Wits On a Success the target begins to drift into death willingly, losing 1 Point of Hardiness. On a Total Success the Target loses 2 Hardiness. If the target reaches 0 Hardiness he or she dies. Hardiness returns at a rate of 1 per hour.

LITTLE MASTER OF THE MARTIAL WORLD
This diminutive martial sect is led by a Hai'anese official named Qin Yu, a former disciple of Perfect Heaven Lineage sect. He was once a great and righteous figure in the martial world. However one day he went too far when he sentenced a local beggar to forced labor for stealing. The beggar was Divine Scholar Wu in human guise performing some of Supreme Judge Yu's duties while the great god rested. He revealed himself and rebuked Qin Yu and cursed him to forever know his place in the world. With a wag of his finger, Qing Yu and all his men shrunk to the size of small figurines. He then charged Qin Yu with venturing forth, despite his small size, to task the worthy with 8 golden talismans of Wu, and condemn the unworthy with the Cangue of Wu. He now wanders the world with his men in great procession, looking for righteous man to task with the talismans.

QIN YU
Qin Yu is barely two inches tall and travels with a retinue of servants, minor officials, and assistants. He also has 12 small soldiers. He is condemned to travel the land and give the 8 talismans of Wu and 12 cangue of wu to the worthy and condemned. These are formal sentences and rewards to be given to specific individuals. When he presents them, he does so quite formally. Qin Yu was a martial hero but his greatly reduced size makes him physically vulnerable. Killing him is as easy as stepping on a mouse. However he is tasked by heaven, so anyone who kills him (though they are free to do so) gains -8 Karma.

Despite his small size and punishment, Qin Yu is as haughty as ever and is beside himself with rage at any who dare defy his decrees. He will aggressively attack any who resist their punishment. Those who reject his gifts, he is polite toward.

Note that his ranks in skills and his Max Wounds reflect his small size. If he returns to his normal size, these would increase. Still some of his techniques can still prove effective.


OBJECTS OF THE PROCESSION
These objects are all wrapped in silk and presented formally to the person by one of Qin Yu's men. He is condemned to go through the world and find the people they are intended for. Once accepted they fly into the air, increase to normal size and affix to the person.

TALISMANS OF WU
These each represent one of the 8 virtues: Filial Piety, Integrity, Order, Loyalty, Propriety, Righteousness, Tradition and Wisdom. Anyone who willingly receives a talisman accepts the task of protecting the virtue where it is challenged each month. If they do this willingly for a full year (13 months), the talisman turns into a Sword of Wu as a reward.

THE CANGUE OF WU
These are cangue boards, which are affixed around the neck, and fitted with shackles that secure to the wrists. These greatly reduce one's ability to move and act, imposing a -2d10 Penalty to all Physical, Trade and Combat Skills. Also this greatly reduces the wearer's ability to interact with the local environment in obvious ways. Each cangue has a sentence written upon it. Usually this is quite simple and involves accruing good merit until. For example, a cangue might say "San Buwei is unfilial and sentenced to rescue mothers from tyrants until the debt is repaid". The cangue remains on until the terms of the sentence are completed.

SWORD OF WU
This golden sword responds to righteousness and have one of the eight virtues written on the blade. Anyone who wields the blade and adheres to the virtue, gains a +1 Extra Wound on damage rolls with the weapon. If the sword is used against anyone actively violating or harming the virtue, they do +2 Extra Wounds. Otherwise this is a normal Jian Sword.
Posted by BEDROCK GAMES at 9:17 AM