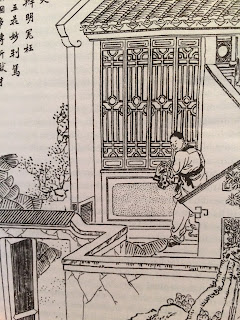 Rouge is a tricky one to game at first because in a lot of ways it is fairly mundane. It is also an interesting story about a young woman named Rouge who is having a hard time finding a husband because, despite being very beautiful, she comes from humble origins. She befriends a woman named Madame Wang he offers to help match her with a scholar named Li. However Madame Wang tells her friend Su Jie about the arrangement and he exploits this knowledge, sneaking into Rouge's bedchamber telling her he is Li and unsuccessfully trying to have his way with her. Before he leaves, he takes her slipper but drops it on the way out. Another man, named Big Mao, finds the slipper and overhears Su Jie confessing his transgression to Madame Wang. He takes the slipper and tries to enact a similar scheme, but because he is less familiar with the layout of the family estate, he wanders into the father's bedroom. There is a scuffle and he kills Rouge's father before fleeing. Rouge, who still thinks both men are Li, accuses Li and he is arrested. In the course of the trial the truth is slowly revealed by a pressing magistrate, but he only manages to get through enough of the deception to pin the crime  on Su Jie. Eventually another magistrate steps in and he uses a clever method to extract the truth from the real killer. He also acts as matchmaker for Li and Rouge and the two get married.

This one spurred an idea about a ghost even though the story doesn't feature one. I also decided to make an NPC magistrate based on the judge at the end.

BLAMING GHOST
Blaming Ghosts are people who died due to someone else's actions. In death their mind is a haze and they see anyone they encounter as the person responsible for bringing about their demise. They were often martial heroes in life and wield ghostly weapons.

Ghostly Strike: Make any Melee attack roll against Parry. On a Success roll 4d10 against Hardiness. If this succeeds drain 1 hardiness on top of Normal Damage for that weapon.

Manipulate Metal: They can animate and bend metal. Typically this is capable of doing 5d10 Damage. When used as an attack make a Meditation roll against Evade.

Control: On a successful command roll, they can take over a person’s body for ten minutes.

MAGISTRATE SHI
Magistrate Shi is a Hai'anese official respected for his ability to sniff out lies and deception. He is particularly good at getting guilty parties to confess to crimes using seemingly ingenious methods. In truth these methods are a smoke screen. While he provides mundane explanations for how he arrives at the truth, in reality he is able to detect falsehoods. For he has a third eye, a slight raised bump on his forehead that grants him this power. This bump is in fact trace evidence of his Hechi lineage. For his ancestors were Hechi, goatmen with horns on their foreheads capable of detecting lies.

Powers
Eye of the Hechi: Magistrate Shi can detect lies with the bump on his head. Make an Empathy roll against Wits. On a Success he can tell if someone is lying.

Posted by BEDROCK GAMES at 9:53 AM