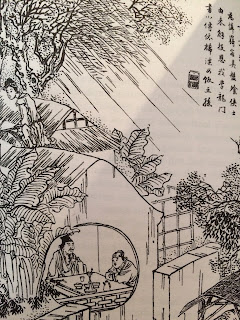 Generosity is about a wealthy man named Ding Qianxi  who goes to an inn run by the Yang family. He is well treated but discovers they are cutting corners because they are impoverished. When he offers money to Mrs. Yang, she refuses it and he is impressed with her character. Later when he hears that the family has fallen on hard times due to famine and hunger he sends them money, a servant, silk, and clothes as a reward for her past actions. Obviously this is a little hard to game as written. There is a hint of the supernatural to the tale as the reward seems to have been sent before the man would even have received news, but otherwise it is all pretty free of conflict and challenge. I figured a good way to approach it is to consider what would happen if the man never came to the inn in the first place, and as a result the Yang family perished during the famine. This allowed me to have Mrs. Yang rise as a Bone Demon. She is a variant of the Bone Demon entry from the upcoming Ogre Gate Inn book.

MRS. YANG'S RAGE
This scenario describes the Yang Family Inn, a modest place found along any road. Mrs. Yang can transport her inn at will, and does so to test the generosity of wandering travelers. Those who display true generosity are rewarded. Those who do not she kills. For Mrs. Yang is really a bone demon who died many years ago from a famine that ravaged the countryside and wiped out her entire family.

This thatched roofed inn looks humble but the food is quite excellent. They also offer plentiful beans for peoples' horses free of charge. It is operated by the Yangs who are all spirits created by fragments of bone, and controlled by Mrs. Yang a Bone Demon. Those coming see an inn that appears to have guests and a kindly proprietor (the guests are also spirits created from bone fragments). Those who ask to be seated are treated to a generous meal at an affordable price. Anything they ask for is brought to them, expertly prepared. However the inn comes and goes at the will of Mrs. Yang, and all the food is a product of her magic.

In the evenings Uncle Guo runs gambling games in the back. These are rigged and people are sure to lose money, but he happily returns it to them after.

If the players speak with Nephew Bai he may show them the granary in back where the remains of Mrs. Yang's victims can be found.

The Rumors: During their stay the players will hear from patrons that the Yang's have fallen on hard luck. The food is from their own supply so that guests can enjoy a good meal.

The Clues: The Yang family all seem to have patchwork and worn clothing (Detect TN 6). They look like they haven't eaten well in months (Medicine TN 4).

The Lies: If the players ask the Yang's they will tell the party that things have been hard due to a local famine and hard economic times. They confess that much of what the players see is just a veneer, that they struggle to keep appearances at the inn.

The Cook: Mrs. Yang is the cook at the inn and occasionally comes out to deliver food to tables when Bai is too busy. She usually makes a point of appearing frail and tired.

The Granary: In the back is an overgrown granary, which is completely empty. Inside are the remains of Mrs. Yang's victims. These are a great pile of bone fragments lined against the wall (these are all the rest of the Yang Family and the guests who have been murdered by Mrs. Yang).

The Reward: If the players hear the woes of the Yang family and donate a generous amount (all of their money if they are poor and a silver tael if they have sufficient wealth) then Mrs. Yang rewards them in the morning with a box filled with riches (see Reward below). These are the treasures she has stolen from other victims at the inn. When the players awake the inn is empty and the Yang Family is gone. When they leave the inn, if they try to go back to it, they find it has vanished.

The Punishment: If the players do not give any donation to the Yang family, Mrs. Yang vents her rage upon them. She uses her powers to seal the doors and close in the nearby forest to make escape difficult (see her powers entry for details). Then she tries to drain them of life and karma. If they are useless to her karmically, she merely kills them.

THE YANG FAMILY
Mr. Yang: This is Mrs. Yang's Husband. He runs the inn and is its public face. He looks weary and concerned.

Uncle Guo: Uncle Guo was the accountant at the inn, the brother of Mrs. Yang and the father of nephew Bai. In the evenings he made extra money running gambling games in the back of the inn. He continues to do this (the games are rigged and anyone playing suffers a -1d10 on relevant Skill rolls).

Nephew Bai: Nephew Bai is kindly and in charge of bringing food to the guests. He is prohibited from telling anyone the truth about the inn. But if he has an opportunity he may warn guests by showing them the granary and lying to them that the bones belong to the former proprietor (hoping this will scare them on their way). 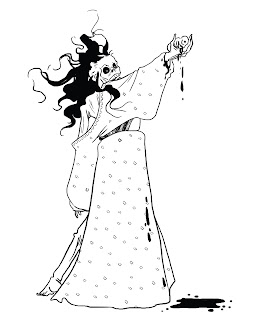 Mrs. Yang is a Bone Demon but looks like a woman in her mid-50s, her joints worn down from years of work. She died years ago during a famine. At that time she had pleaded with many wealthy men to spare money for her and her family, but no one gave any aid. Her husband died, followed by her nephew and brother. She was the last to go and vowed she would expose the hypocrisy of righteous men. Now she burns with a grudge against those claiming to be virtuous. She tests everyone who comes to her inn, making it clear that her family needs assistance. Anyone who fails to give generously, she feeds upon.

At the inn Mrs. Yang does most of the cooking and occasionally brings out food when Nephew Bai is overworked. When she does, she walks as if in great pain, appearing ill for many years toiling at the stove. If anyone comments she tells the family has no choice, as they are quite poor.

Wisps of Life: If Mrs. Yang has a fragment of bone from a person, such as a finger tip, she can cause that individual to appear again for several hours at a time as if alive. The person has all their memories but is under Mrs. Yang's supervision. She can destroy them forever by grinding their bones, so most follow her rules.

Control Environment: Mrs. Yang can summon rain, sleet and snow at will to encourage people to stay at her inn. She can also alter and move the surrounding trees and growth, making escape from the inn itself difficult. When she does this, anyone trying to get away from the inn has to make a Survival (Wilderness) Roll TN 8 every 50 feet or find themselves re-routed back to the inn. This can be overcome by causing a fire (but that would have consequences for the local forest).

Bite and Karmic Feeding: The bite of a Bone Demon inflicts 6d10 Open Damage and drains 1 point of bad Karma. Every point of bad Karma the Bone Demon drains increases its max Wounds by 1 permanently. If Mrs. Yang consumes a person with with 1- to -9 Karma in a single sitting, she extends her life by 1 month . If she consumes someone who is truly villainous (a person with -10 Karma) in a single sitting, it extends her life by 200 years. Devouring a person with good Karma gives her a mere week of life. Devouring a person with 10 Karma, instantly destroys her.

Bone Spear: The ribs and other bones of a Bone Demon can shoot out suddenly and impale foes (striking everyone within a ten-foot area). Roll Bone Strike against Parry. On a Success this inflicts 4d10 plus 2 Wounds. On a Total Success it inflicts 4d10 Open Damage plus 3 Wounds (and an Extra Wound for each additional Total Success).

Illusions: A Bone Demon can weave a very convincing illusion to make it appear like a normal human. This can be any type of human it wishes (old, young, beautiful, ugly, tall, short, and so forth). However, the illusionary transformation inflicts a single Wound on the Bone Demon. It lasts for as long as the Bone Demon wishes or until someone magically forces it to end. This illusion cannot be detected by normal means. Only the most powerful magic can see through it.

Illusory Foodstuff: Mrs. Yang's illusions can also be used to make water seem like tea or wine, to change earth into rice or hay into noodles. In short, she can use this to create the sense of any cuisine she wishes. Like her other illusion ability, the true nature of her illusions can only be seen through magical means.

Waste Away: Mrs. Yang is on the brink of death and must consume the flesh of the wicked to survive.  A normal person can extend her life by a month, a person with bad karma person can extend its life by 200 years. Without eating the flesh and extending her life in this way, she must make a Meditation roll TN 7 every week or die.

Impaling Heart Strike: The skeletal fingers of a Bone Demon are sharp and long. They are capable of impaling the chest and clutching a person’s heart in an instant. If a Bone Demon scores 2 Total Successes on an Arm Strike Roll and succeeds on its subsequent Damage roll, it can (if it chooses) rip out a person’s heart.

THE REWARD
Those who are generous to the Yang Family are rewarded the next day with a box of treasure, taken from previous guests that she has devoured. If the objects are too large for the box, she may instead place them beside it. Roll on the Reward Table to see what she gives.