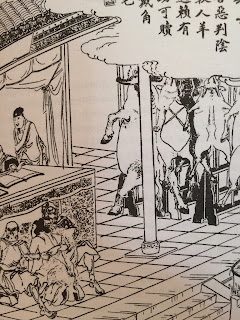 Today I am doing Sheep Skin (#52) and Sharp Sword (#53). Sheep Skin is about a man who remembers being reincarnated after appearing before Yama. He recalls seeing racks of animal hide which were wrapped around anyone sentenced to rebirth as an animal. His sentence initially calls for this, but one of Yama's assistants consults the records and realizes this is an error. However the skin has already begun to fuse to his flesh and they have to rip it off, leaving a small patch of animal hide on his body. In his next life he is left with a birthmark of white fur on his back. Sharp Sword is very short and about a sword that can cut through virtually anything. It is possessed by a soldier who is present when a group of bandits are brought for execution. One of them says he has heard that the man's sword is the sharpest and asks for him to be his executioner. The soldier cuts of his head and as it tumbles the head declares the sword to be sharp indeed.

HELL-BOUND BEAST SKIN
After death, in the halls of the Eight Magistrates, as men and women are reviewed and sentenced to their next life, one can catch a glimpse of racks of animal skin suspended in wooden frames. These hides are wrapped around those sentenced to be reborn as animals. They fuse with the flesh and turn men into beasts. However some escape from the halls of the Eight Magistrates and desperately cling to life by taking over human bodies, such creatures are called Hell-Bound Beast Skins.

Hell-Bound Beast Skins look like a skinned hide of animal flesh, and fly through the air like a kite. They descend and wrap themselves around the bodies of their victims, turning the person into a weird blend of animal and man. From that day on the two beings struggle for control of the body and mind.


Max Wounds: 5
Powers
Binding: Hell-Bound Beast Skins wrap around human bodies and bind to them. They descend on their victims like a shroud. To use this ability roll Grapple against Parry. On a Success the target is restrained and begins to transform into a beast. They must make an Endurance Skill Roll against the Resolve of the Hell-Bound Beast each round they are grappled. If the target fails its Endurance roll, it is transformed.
Tranformation: Anyone successfully bound by a Hell-Bound Beast, instantly has the hide fused to its flesh and starts turning into a creature of that type. For the first day the person looks like a normal pig, horse, crocodile, ox or similar creature (they also have the normal stats for that animal). However every day after that the victim is allowed a Meditation roll to escape. On a Success the target regains partial control becoming a bizarre hybrid of the animal. He or she retains his mind, but looks strange and will have the teeth and claws, as well as any inherent desires of the animal (see hybrid below). The person is not permanently free and must continue making Meditation rolls. On a Total Success the person casts off the skin and is free. However the skin still may give chase. If they do not succeed on their mediation roll for 5 consecutive days, the change is permanent.
Hybrid Form: In hybrid form, the victim retains most of his or her mind, but still has the impulses of the animal. Therefore they must pass a Resolve Test (3d10 against Resolve) or behave as the animal would (eating humans or other animals in the case of a crocodile, rolling in mud in the case of a pig, etc). In this form, the victim has two arms and two legs, walks upright, but has the jaws and mouth of the creature (with whatever bite and damage that entails) and any claws or hooves of the creature as well (also with whatever bite and damage that entails).

THE SHARP SWORD OF ZHANG 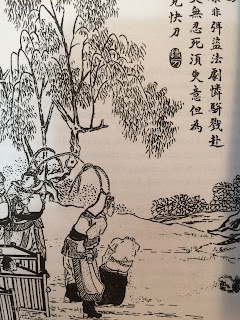 This is a very special sword, forged during the Hen-Shi Dynasty. It is similar to a jian but slightly wider with archaic designs on a metal cross guard and long wooden handle. The blade looks like the clean surface of a still pond. It can slice easily through flesh, stone, metal or other materials. Unlike a Normal Jian it does Muscle+2d10 for Damage and has an Accuracy bonus of +1d10. For the purposes of Damage Rolls always apply a -2 penalty to the Target's Hardiness (against objects this is a -4). Due to its Sharpness, roll on the Sharp Sword of Zhang Injury Table any time you get a Total Success on the Attack roll (forgoing Normal Damage unless otherwise stated).

Presently the sword's whereabouts are unknown but it is believed to be located in an ancient tomb of a member of the Hen-Dynasty family. According to some accounts it was created by Hen-Shi herself so that enemies of the empire were killed with mercy.