GAMING TALES FROM A CHINESE STUDIO 76-79: FROG CHORUS AND MORE

Frog Chorus and Performing Mice are both about animals that can be used to perform for audiences. In the former, a man has a box with twelve frogs that each croak different notes when tapped. In Performing Mice, a man teaches mice to dance in masks and costumes on a small stage. 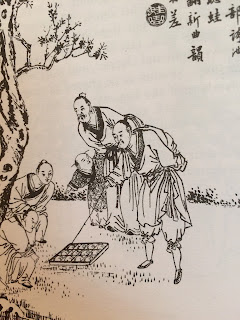 The Clay Scholar is about a woman who marries an ugly man and despite not being happy, stays true to him. However a scholar begins visiting her each night to have sex with her despite her protestations (this is one to avoid if you are sensitive to depictions of sexual violence). She grows increasingly haggard and they arrange for the husband to ambush the scholar. When the scholar visits again during the night, the husband smashes him with a cudgel. They light a lamp to find there are just shattered pieces of clay on the ground.

Flowers of Illusion has a lot of stuff to game. It is about an eccentric and seemingly homeless Taoist priest who impresses local gentry when he turns his clothes into a serpent as someone tries to rob him. He then performs all sorts of magical feats, summoning food from nowhere, causing flowers to bloom in a moment, and pouring wine from an empty vessel. This last trick upsets the local official he is entertaining (because it empties out the man's wine vats in the process) and he ends up getting caned. However he enchants the cane and every strike to the priest, cuts the buttocks of the magistrate.

THE CLAY SCHOLAR
CLAY SCHOLAR
The Clay Scholar is a type of spirited clay that often takes the form of a scholar but can appear in any guise it wishes. They feed off beauty while people sleep, stealing their good looks. The more a Claw Scholar feeds, the more beautiful and human-like it becomes.

Powers
Drain: A clay scholar can drain beauty by touch. Make a Gentle Touch Roll against the Parry of the target (note they often do this while people sleep). On a Success roll 3d10 against Resolve. On a Success it depletes their beauty, draining 1 rank of Persuade from the target permanently. This can be regained over time by spending XP as the victim learns to compensate.Every ten ranks they drain, increases the scholar's Persuade by 1d10 and improves their looks greatly.

Weakness: Claw Scholars are not particularly durable. They can be harmed by normal means, but blunt weapons like Golden Hammers or Hard Whips do an Extra wound agains them.


CHORAL FROGS AND PERFORMING MICE
CHORAL FROGS
These strange creatures are found in the swamps of the south. They look like normal frogs except they have sharp teeth and each one is capable of playing a single note of music. They are only able to play one note, so a given frog might croak in G# for example, while another would croak in A. This allows people to arrange them and hold choral frog performances. But even in their natural environment the effect of them croaking can be melodically pleasant, discordant or filled with tension depending on which ones happen to be in the area.

Dodge: Frogs are quite nimble and leap away from both ranged and melee attacks. Anytime someone tries to hit them with a melee strike, roll their Athletics against the attack roll. On a Success the frog avoids the strike. This doesn't work on canopy attacks like nets.

Musical Croak: Each frog can sound a particular note with its croak.

PERFORMING MICE
These mice are particularly intelligent and well suited to training for performance. While most mice can be trained to do a trick or two, they are usually not smart enough to have such a large repertoire of techniques. Performing Mice are smarter and can learn more tricks. They also seem to enjoy it and are better at emulating human mannerisms.

Powers
Performance: Performing Mice can learn 1 trick (in the form of a talent) for every rank of Wits they have.

Smart: Performing Mice have a Wits score that can range from 4-6.

TALENT: MOUSE TRAINING (NEW SKILL)
With this skill you can train mice to perform for a crowd. The more intelligent the mouse the more tricks you can teach it. Teaching a mouse a trick takes a week, during which you get one roll against TN 8. On a success you teach it a new trick. This can include things like leaping through a hoop, rolling, squeaking on command and even performing a dance from an opera (the later requires getting a Total Success on the training roll). To get them to perform their trick you need to make another Talent (Mouse Training) roll against their Resolve.

FLOWERS OF ILLUSION
I really enjoyed Flowers of Illusion and it is packed with cool magical ideas. Lately I've been toying with a Ritual Master path in the Wandering Heroes of Ogre Gate Game. I decided to combine that with the priest from the story to create a character and new rituals.

RITUAL MASTER PATH
Ritual Masters can gain ranks in Qi, but their Max Wounds never increase. They always remain at Max Wounds 1. Every Qi rank you advance you can create 1 New Ritual. In addition, some Rituals increase in power as you do. You can use these to build groups of protectors or servants, but until you find the secret to achieve immortality, your Max Wounds always stay Max Wounds 1.

At character Creation you also begin play with 2 Rituals at Rank 1 (and can purchase rituals through normal means like any other character).

BROKEN COMB (MA FENG)
Broken Comb is a disheveled Yen-Li priest who roams the land and enjoys using his powers to gain access to wealthy patrons. However he is a stubborn and playful man who enjoys embarrassing men of higher social standing, and this often does not end well for him. He is usually quite aimless, wearing a simple robe, old yellow sash and never keeping shoes. Us staves of the cold with his ritual magic. He is named for the broken comb he uses to bind his hair.

NEW RITUALS
CLOTH TO SNAKE (TN 7)
You can turn an item of your own clothing into a snake with a word. First you must spend thirty minutes reciting over your clothes under moonlight. On a Success you impart the clothes with the ability to turn into a specific kind of snake on command (standard is Southern Snake, WHOG, 357). It remains a snake for a number of rounds equal to your Ritual Master Qi rank.

PAINTING THE HIDDEN INN (SPECIAL)
You paint a door on a wall and it opens to reveal a kitchen and serving staff who prepare food for you and select guests. First make a Talent (Painting) roll TN 6 to paint the door. If this works you must knock on the door and make a Ritual Roll TN 7. On a Success beyond the door you find a large kitchen, with cooks, servers, and plentiful ingredients. They can prepare a number of courses equal to your Ritual Master Qi rank.

DREAM LOTUS
You drop a seed in a body of water and colorful lotuses grow in the next few minutes, filling a large area with their beauty. These are just illusions, and seem to grow more distant the closer one walks toward them. Drop a lotus seed and make a Ritual Roll. On a Success you cause an illusion of lotuses that can span a 200 yard area.

WARMTH RITUAL
You recite prayers to Xang and petition him to protect you from the cold. Make a Ritual Roll TN 6. On a Success a disc of warmth surrounds you, warding off frost, cold and wind for a number of hours equal to your Ritual Master Qi Rank.

WEAPON REVERSAL
You speak a word and touch a weapon. If that weapon is used to strike you, the wielder suffers all the harm and you are unscathed. First you must touch the weapon (this requires an Arm Strike against Parry if the wielder is resisting). If you do this, then you speak a word of gibberish and make a Ritual Roll TN 7. On a Success the weapon reverses any damage you would take back onto the wielder each time he or she strikes you. The enchantment lasts for 1 minute per Ritual Master Qi rank.

*The Qi of a Ritual Master does not increase health using these rules. Nor does he have access to Kung Fu.