GAMING TALES FROM A CHINESE STUDIO 90-91: A CURE FOR MARITAL STRIFE AND A PRANK

Today will be a shorter entry because I have a game session to prep for. But today I talk about A Cure for Marital Strife (#90) and A Prank (#91).

In A Cure for Marital Strife, a couple gets married and simply doesn't get along. The core dispute revolves around sex. The wife will not have sex with the husband (wearing a chastity belt and sleeping next to sharpened awls to ward him away at night). In the end the mother-in-law gets a nun to perform magic, which fails the first time but works the second, to get them to become a happy childbearing couple. I should warn readers this story contains a scene where the husband drugs and rapes the wife (and it is a pretty gritty portrayal compared to portrayals of similar things elsewhere in the book). 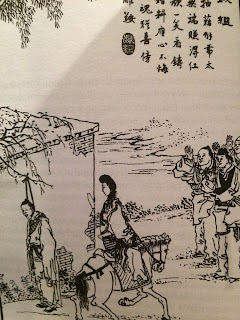 Obviously this one presents some difficulty given the content, so I will sidestep those elements and focus on the gameable stuff that leapt to mind. The first thing I thought of was a new type of ghost. At the point in the story, the wife tries to hang herself and I realized a hanged ghost was something we hadn't done before (she doesn't become a ghost, but it prompted this idea). Later in the story, the nun performs her magic by cutting out figures from erotic scrolls and placing them in the bedchamber. I created a ritual from the core idea of using the figures but went a different direction.

A Prank is a much shorter story about a young man who wants to trick a passing woman on a horse by pretending to hang himself on a stalk of millet. Unfortunately for him, the stalk proves stronger than he anticipated and he accidentally hangs himself to death.

I decided to make Spirited Foxtail Millet. In the story he actually hangs himself with a sash suspended from the stalk, but I think streamlining and making the stalk animate is more sensible for gaming.

In both cases I decided to invoke the Suffocation rules and have them feature a similar attack.

HANGING GHOST
This is the ghost of a person who has been hanged. They appear pale with a long neck, head tilted oddly, and an extremely long swollen tongue (which they use to strange people). To Hanging Ghosts all humans are the same. They deem anyone they encounter responsible for their death.


Strangling Tongue: Make a Tongue Attack roll (4d10) against Parry. On a Success it wraps around the targets neck, crushes and strangles. This does 3d10 Damage each round plus it begins Suffocation (See SUFFOCATION page 83 WHOG).

Float: Hanging ghosts can hover and float above the ground, giving them a minor ability to fly.

This looks like a normal field of Foxtail Millet, but is in fact a spirited entity. It is capable of taking human form briefly to appear as a head, a leg, even a bushy tail, glimpsed through the stalks. They seem to move seductively and invitingly between the strands of millet and strangle intruders with the long entangling stalks. The stalks are surprisingly durable.

Strangling Stalk: Roll 3d10 against parry. On a Success the stalk wraps around the neck and begins choking the target (see suffocation). Escape requires a TN 8 muscle roll, or doing three wounds to the stalk. Every ten victims it kills in this way, feeds the field and causes it to grow by 1 Mu.

Lashing Stalk: The stalks can lash anyone inside the field with flesh rending fury once each round. Roll 3d10 against Parry. On a Success the target takes 2d10 Open Damage.

PAPER FIGURES OF PERSUASION (NEW RITUAL)
This ritual allows you to create paper figures by cutting out illustrations of characters from a scroll or book and pasting them in a bedchamber. Anyone who sleeps beneath them is reminded of the ideas or deeds the figures represent and this could influence their feelings during the day. For example, if you pasted images of Kong Zhi, the sleeper might feel more well disposed toward Dehuans, or more firm in his or her commitment to Dehuan virtues. To use this Ritual you have to cut out the Figures. Then you must place them in the bedchamber of the target and recite long rapid lines of magical verse. Make a Ritual Roll TN 8. On a Success you succeed and anyone who sleeps in the bed and has a Wits of 8 or less will be influenced the next day by your images. On a Total Success this affects anyone with Wits of 10 or less.
Posted by BEDROCK GAMES at 8:32 AM