GAMING TALES FROM A CHINESE STUDIO 98-100: THE SOUTHERN WUTONG-SPIRIT AND MORE 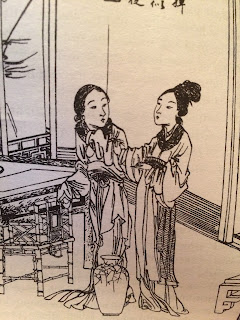 The Southern Wutong Spirit is about a group of five Wutong Spirits who term one another brother (i.e. first brother, second brother, etc). They are lascivious spirits who have their way with men's wives. There is a demon hunter who goes after them. This one was a bit of a challenge to do due to the content. I decided to created three brotherly spirits.

Sunset is about a benevolent spirit named Sunset who falls in love with a man and eventually helps him fend deal with a Wutong Spirit pestering his niece by having her servant cut off its penis. She wears a magic bracelet that I made into a magic item here.

The Male Concubine is about a male concubine who looks like a woman. I decided to make a character modeled loosely after the character.


THREE GHOSTLY BROTHERS
The Three Ghostly brothers are three spirits who dwell in an abandoned courtyard house in the wilderness. Occasionally they feed on the life entry of passing humans, but for the most part they have other interests (and one of them doesn't even live on human life). This can be deceiving as they come across as quite polite, even interesting, on first meeting. However they are capable of great cruelty towards mortals when it suits them.

OUYANG (FIRST BROTHER)
Ouyang is loud and boisterous, and stands nearly 7 feet tall. He is a terrible spirit with a lust for life who likes to rob mortals of their riches. However he has a soft spot for beautiful women and tries to woo them with his charm and banter.

Life Drain: If Ouyang strikes and Damages a foe with his arm strike he drains 1 Point of Hardiness which comes back at a rate of 1 per hour.

Immunities: Ouyang is immune to mundane attacks and non-energy based Kung Fu attacks. He is harmed by attacks that use Qi energy, fire or magic. He is particularly vulnerable to roses and takes 2 automatic wounds when he comes into contact with them.

Nocturnal: Exposure to sunlight will kill Ouyang. During the day he is just a pile of bones. At night he materializes.

Vanish: Ouyang can vanish from sight with a Speed TN 6 roll and appear anywhere he wishes within 200 yards.

YAN (SECOND BROTHER)
Yan is a ghostly scholar with a penchant for fine wine and books. He sneaks into the homes of the elite and drains their wine from whatever vats or vessels he can find. He also eats peoples books, gaining whatever knowledge he consumes. Recently Yan heard of something called the Golden Sunset Bracelet. This is an object that he greatly fears but also desires. He thinks it will be a fun object to pester Third Brother with.

Consume Knowledge: Whatever he eats, Yan knows. If he eats a book he gains all the information inside, if he eats an artifact he learns everything about it.

Confusing Banter: Yan can talk at dizzying speed, literally causing vertigo and collapse in listeners. Make a Deception roll against the Wits of the target. On a Success they get dizzy and suffer -1d10 to all skills. On a Total Success they drop to the ground and need to lay there for at least five minutes. If they don't all their skills have a penalty of -2d10.

Immunities: Yanis immune to mundane attacks and non-energy based Kung Fu attacks. He is harmed by attacks that use Qi energy, fire or magic.

Nocturnal: Exposure to sunlight will kill Yan. During the day he is just a pile of bones. At night he materializes.

Vanish: Yan can vanish from sight with a Speed TN 6 roll and appear anywhere he wishes within 100 yards.

JIN (THIRD BROTHER)
Jin isn't the real brother of Yan or Ouyang. He isn't even a ghost like them, he is a bird demon. He began life as Ouyang's pet Mynah bird, but has since taken on a life of his own. Among the brothers he is the most drive and is constantly trying to combine the other two brother's talents to achieve big things. Jin feeds on human hearts but he is fascinated by other parts of the human body, particularly the bones. He collects human femur bones, and has a vast collection of them in his hall.

Powers
Compelling Voice: Roll against Persuade against Resolve. On a Success, anything Jin says to the target sounds like a good idea and like it is true.
Heart Pluck: Plows beak into chest cavity and into heart. This does 6d10 Open Damage plus it drains 1 Qi. If the strike kills, it plucks out the target’s heart and devours it.
Bone Taking Claw: Jin has a terrifying Claw attack. He only uses it to provoke fear but he can pluck the femur bone from the body with a single motion. Make a Claw Strike against Parry. On a Success he does 6d10 Damage. On a Total Success he plucks out the femur bone (effectively giving the target the Missing Limb Flaw).
Healing Heart: When Bird Demons eat a human heart it nourishes them but also heals them by an amount equal to the victim’s Qi Rank.
Shape Change: Bird Demons can take the form of birds, bird-like hybrids and humans.
Immunities: Bird Demons are immune to all normal attacks, only taking damage from Kung Fu techniques Qi level 1 or greater.

THE GOLDEN SUNSET BRACELET
This Bracelet wards off darkness when worn by anyone with positive Karma. It also keeps demons at bay. If they approach it, roll 3d10 against their Endurance. On a Success they simply cannot come near due to the pain it causes. When used to produce light it emits illuminate in all directions in a 120 foot radius.

LIU MIN
Liu Min is a courtesan with a normal name but exceptional talents. He works at the Trim Sleeve Brothel where he is a local favorite. He is a talented performer and capable of appearing as a man or woman for his clients. But he is also a secret demon hunter and has in his possession the Golden Sunset Bracelet. He often uses his position at the brothel to help root out demons in the area.

Posted by BEDROCK GAMES at 1:49 PM