ORCS OF THE NORTH: THE MARRIAGE OF PRINCE ORTHU AND ANAREE 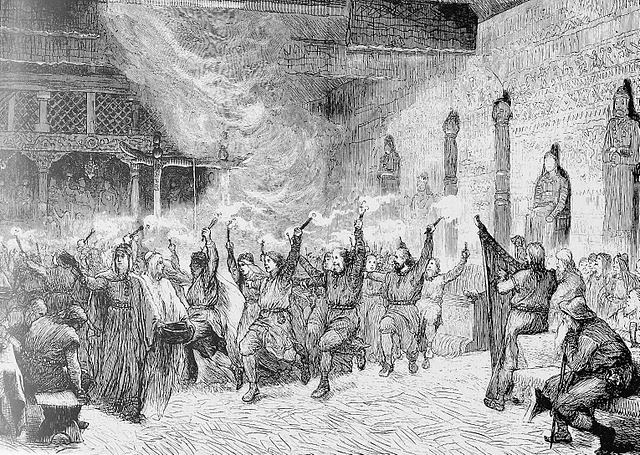 In this session of Sertorius, where our characters have been serving King Malka of the Pendeo Tribes, we continued our flight from Caelum after assassinating General Brogustu (our last session).

The party is still mainly Orcish and consisted of the following:

-Shillek, a Halfling from the Shahr Republic who has business in the North.

-Varia, a Human from East.

When we left off, we were still in Caelum and trying to flee after we had killed Brogustu. Originally we wanted to go by land, but it was decided a single voyage by ship from Rono to Neoda was our best bet. However that is a long voyage, so we had some difficulty finding a ship at the last minute. We tried persuading a local merchant vessel but lacked the funds to make it worth their while. Ah-Sri provided the solution by using The Transformation of Ashan, a spell that enables him to turn substances into gold temporarily (note, this spell is from the upcoming free PDF, Book of the Archon). Transformation of Ashan also can make transmutations but it comes at great cost, and we decided not to take the risk. Instead we used the temporary attempt as a demonstration to show the captain we could make him gold endlessly (we actually could not do this but it was a lie we needed to tell to escape). We made a deal that upon arrival in Neoda, the king would reward him for his troubles, granting him double what he could have made otherwise and establishing favorable trade ties with the local chieftains. He agreed but we still had a many weeks journey by sea ahead of us.

Thankfully, and through use of various magics to assist safe passage, we arrived in Neoda several weeks later with only a few shark sightings along the way. In Neoda we re-united with the other members of the party and presented ourselves to the king to announce the death of Brogustu. Malka was pleased and made us all priests of Ozias. He also provided us with ample living quarters.

The King then told us his plans for war with Caelum. He wanted to ally with the Mandaru tribes, so had reached an agreement with their Kashan: Malka's son Orthu would marry the Kashan's second daughter Anaree. We were placed in charge of managing the details and escorting Orthu to Mandaru. This alliance would allow both powers to strike at Caelum, one from the North and one from the South. It also brought Sardona into the fold, because Mandaru treats them as a client kingdom.

We were quite concerned about the distance to Mandaru, both in terms of securing safe passage for the prince but also because it posed some logistical issues for the invasion. However we were informed that the king's Sertori adviser had created a solution. Using powerful magic called Thauma, something well beyond our own abilities, he constructed portals making travel between Neoda and the Mandaru lands possible in an instant. He also intended to use these portals during the invasion.

We traveled through the first portal, which was a swirling cloud encased in an iron rim and arrived near Vashanu (the Mandaru capital). There we met with Anaree, the Kashan's daughter, and found her to be quite against the idea of marrying an orc. Anaree seemed intelligent, hot tempered and interested in taking an active role in politics and war (she even mentioned wanting to fight in the upcoming conflict). We heard her concerns and went back with them to Malka and Prince Orthu.

Speaking with Orthu, he was less impressive than Anaree and this caused us some concern. For the invasion to work, the marriage would need to go forward without any difficulties. Orthu was quite oblivious to the seriousness of the situation, and seemed incapable of impressing Anaree. But more concerning than that was the fact that Orcs and Elves, to our knowledge, cannot procreate together. This meant, if Anaree were to go to war and die, there would be nothing left to tie the two powers together. Therefore we went to King Malka to devise a solution.

Our first proposal was to approach Ozias and see if a miracle could be performed making such a child possible. This was dismissed as outside of Ozias' concerns. We then considered an appeal to Ranua (the Elven goddess) asking for the same miracle, but Malka feared offending Ozias. In the end we decided it would be best to allow Anaree to have a child with an elf she found acceptable and then have King Malka adopt the offspring of that union as his own grandson. Provided Anaree and Orthu agree to this solution, it might work. However we also decided the elf in question who serves this function would need to be dealt with so he doesn't threaten Orthu's claim. King Malka decided the easiest solution would be to have him lead the initial invasion, where he would be likely to die.

Posted by BEDROCK GAMES at 1:14 PM