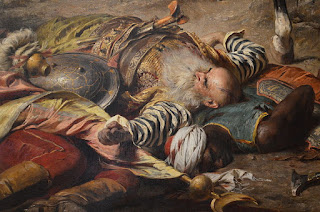 Posting this as part of my campaign notes series. The point is to provide players and GMs a window into how we run our games. These are some notes from my Sertorius campaign last year. They are in note form, with some re-organization for readability (but unedited).

This adventure marked the second week of the Ser-Vel's control of Goff-Tan tower, it also saw changes to the Blood Cult, with Goff-Tan's former student, Abu Nutesh, taking over the leadership position. I ended up running the second half of this as a hack of Feast of Goblyns, so I am leaving those notes out. Basically I used one of the maps as Abu Nutesh's base (calling it the Parsan Gorge). The log for this session can be found HERE. Some of it is also detailed HERE. These sessions also saw the death of a player character.

SWORDS OF THE FOUR TAVERNS: ABU NUTESH
In the wake of the devastating attack on Goff-Tan tower and the emergence of the Ser-Vel, the Gesarians and the Blood Cult regroup, rallying behind Abu Nutesh, a cultist who shares many of Goff-Tan's talents but none of his scruples.

VAELA’S NEWS (VAELA IS THE SER-VEL'S HASRI ADVISER)
1) Crassus (A member the Ser-Vel sent on a mission) is dead, killed by the inquisition outside Shahr-Tel. His body was then taken south to a canyon in Beora, near Parsa.

2) Darios Tyrna was nearly killed by the inquisition when Jurista Nutesh came to his village. His men inform him that Darios managed to escape to Hakdar-Kane.

THE BEAST ATTACKS
During the feast night, the beast attacks one of the PCs. The beast was created by the blood cult with the bodies of Ruega and Gregos.

The beast is large, made with the body of a bear, the arms of Troll Sertori and its skin layered with a dragon like scale hide. The face is hideous, two split down the middle and stitched together. Detect (TN 7) to discern it is Ruega and Gregos.

ESHMUNAZUR’S RESPONSE
The party sent message to Eshmunazur to form an alliance. Because they sent a worshipper of Sul, Eshmunazur is pleased and willing to deal with the party. He sends his own emissary (Qadi Hagga) to Goff-Tan tower to issue his list of requirements:

1) The Worship of Sul be permitted, with a temple in every major city.
2) An increase in holdings to include Varholta and Lake Ramos.
3) He will be granted the title Malika (King) Alu-Hakdar wa Varholta (he makes a point of emphasizing "wa")

BELGA’S ASSESSMENT
Belga is displeased, believes they need to gain troops by forming agreements with Appreans. Thinks Chief Dorgel is a potential ally.

Raising (needs a full month or two)
1,000 Humans (Beora): Technically an aggressive move against Beora.
500 Gru (Varpen)
150 Ogres (Lishan)
50 Gru/Human (The Hurn)
Rumors of many Gru across river, as well as human tribes.

EPARKOS LUCAS DEMANDS ANSWERS
Eparkos arrives on behalf of his father demanding answers for recent events in Goff-Tan and wanting to know what happened to the Church of Ramos in Narna. Goresios willing to work with the Ser-Vel provided there are lasting benefits for him.

THE MATTER OF VARGUS
Vargus Assassinated, the King will try to recall Gaius to Port Sul to transfer the holdings. This is obviously a trap.

ABU NUTESH AND THE BLOOD CULT

ABU NUTESH
Abu Nutesh (also known as Jurista Nutesh) is a halfling and leading member of the blood cult. He is student of Goff-Tan and experimenting with making Sertori abominations by stitching together different sertori body parts. This has had varying results. Nutesh is from the Qalah family, a distant cousin of the Queen. He is loyal to Gesara and to the King. He in Parsan Gorge and cares only about his goals, having no regard for human or Sertori life. For him, his grotesque experiments are not an undesirable necessity, they are the aim itself.

Abu Nutesh can take the form of those sacrificed on the blood stone. These sacrifices also give him youth.

Wounds: 6
Emotions: Deimos 3, Agape 1
Spells: Pora’s Portrait, Daydream (One image, no senses/9 rounds OR Three Images, building size, all senses/9 Hours), Dread Passenger, Eyes of Knowing
Ring of Raising and Sending: A ring made of bronze with ivory inlays. This enables one to command skeletons.
Change Shape: He can appear as a Halfling woman, a human man, an orc woman, and an elven woman.

2. Flame: Can create a burst of fire that does 3d10 damage.
3. Blend: Can blend with environment, taking 10 Stealth for 10 minutes.
4. Strength: Can grow very strong, doing 1 extra wound on melee attacks for a round.
8. Retribution: If successfully attacked by a spell and survive can cast it back at exact same effect on caster.

1. Fulvarus Vestu (Inquisitor), Human
Hail of Needles (Power): Hail of Stinging Needles 1d10 against evade, 1d10 damage to everyone in thirty foot area. Total Success drains Evade and Parry by 1 for a minute.
Mask of Bal-Tauq: Allows him to read thoughts (1d10 against Wits).

5. Rosh (Intimidation and Poisoning), Gru
Swarm of Insects: Summon a swarm of bees to sting with 3 wounds total, causes 1 wound a round and intense pain.
Deadly Touch: With a successful touch roll 2d10 against Hardiness or suffer Royal Fever.

6. Dartena, Human
Spirit Form: She can take the form of a spirit and while in that form is immune to mundane attacks and can drain 1 Hardiness on a successful Wrestle Roll.
Wail: This causes so much pain to the ears and body that it freezes people in their tracks so long as she maintains it. 1d10 against Resolve.

Powers
Charge: Despite their small size, Pavalorgi are capable of delivering a potent charge attack, provided they have enough room to run their full move and jump at their Target.  When a Pavalorgi does this on a successful attack, then its horn does an Automatic 1 Wound.