GAMING TALES FROM A CHINESE STUDIO: THE MONSTER IN THE BUCKWHEAT, THE HAUNTED HOUSE AND STEALING A PEACH 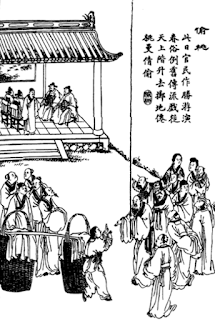 I have been making monsters and scenarios inspired by Pu Songling's Strange Tales from a Chinese Studio. You can see the previous entry HERE. The first entry where I explain the concept is HERE. I am covering three more stories in this blog post: The Monster in the Buckwheat, The Haunted House, and Stealing a Peach. All require liberal innovation on my part to make them work as gaming material. The Monster in the Buckwheat is the 10th entry in the Penguin edition and is literally about a monster hiding in fields of buckwheat. The Haunted House is the 11th entry and is about a haunted house with weird flesh-like furniture and tiny ghosts. Stealing a Peach is my favorite of the three but a little harder to game. It is about a mysterious man who claims to possess miraculous powers. He creates a sky rope to Heaven and sends his son up into the clouds to retrieve a peach from the garden of the Queen Mother of the West*. I decided to take elements of it and turn them into things in the setting.

THE BUCKWHEAT BEAST
The Buckwheat Beast feasts on farmers, creeping into their fields at night and surprising them when they come to harvest. They have thick red hair and bristly beards that blend well with buckwheat when it is ripe. They are also very tall, reaching as high as 10 feet. However they are cowardly, often fleeing when cut or harmed. Still they are persistent and usually return to attack again after a few hours.


Powers
Chomp: The Buckwheat Beast can easily chomp through bone. This imposes a -3 penalty to Hardiness against Targets for purposes of rolling Damage on any Bite attack. Its bite does 4d10 Open Damage.

Blend: Despite their enormous size, Buckwheat Beasts are very good at remaining still and hiding in fields to surprise farmers. They are especially good at hiding in fields of ripe Buckwheat, which resemble their rust-colored hair tone. In a field of ripe buckwheat their Stealth increases to 10.

GHOSTS OF THE HAUNTED VILLA
These diminutive ghosts appear as they did in live, except they are wholly malicious and in constant mourning for themselves. They detest the living and will try to kill them through trickery and deception. They can make traps, trip people and lead them to their deaths. Otherwise they are fairly harmless as they have no real way of harming a fully grown human .


Destroying Ghosts of Haunted Villa: The ghosts are only harmed by magic and Qi energy. Magic Weapons harm them and Qi based energy Attacks can harm them. Normal Mundane attacks and even non-energy Kung Fu attacks will do little against them. Ghosts reduced to zero health by magic weapons or energy Attacks are not destroyed permanently. They come back in a matter of days. Only Ritual magic, Immortal Powers or the hand of a deity can truly destroy a Ghost. They can also be suppressed or contained by magical means.
Trip: Because of their small size, Ghosts of Haunted Villa are good at tripping opponents. They can make a Trip roll against Evade. On a Success, the target falls for 1d10 damage. If they are in a precarious position or dangerous location when tripping (such as into a ravine) they could take more falling damage.
Trap Making: Ghosts of Haunted Villa can make deadly traps to kill the living. They can use this to make any trap from the WHOG rulebook or devise new ones (see page 425, WHOG).
Create Ghosts: Anyone killed by a Ghost of the Haunted Villa returns as a diminutive ghost as well.

FLESHLY FURNISHINGS OF THE HAUNTED VILLA
Unnerving to behold, the Fleshly Furnishings of the Haunted Villa seem pink from a distance, but otherwise resemble normal furniture of their type. However on close inspection the surface looks and feels like flesh. They can disappear through walls but their most terrifying ability is their crushing form. They can wrap around a target and crush the person until he or she is absorbed into them. Every victim makes them bigger and stronger. They begin as small objects and can increase in size until they are as large as a room or house.

Absorb: Fleshing Furnishings absorb people, gaining 2 Max Wounds for every victim, and 1 rank in Muscle. This also increases their overall mass by 50% and increases their Beast Strength.

Beast Strength x2: This increases by 1 for every victim they absorb.

WARDENS OF HEAVEN
These celestial guards keep watch over the Peaches of Immortality. They are commanded by the Divine Concubine, a former martial hero of great renown who achieved immortality then godhood and now serves in the court of the Enlightened Goddess.

Limb Taking Strikes: When attacking with their swords, Wardens of heaven cut off a limb of their choice (including the head) on a Total Success.

PEACHES OF IMMORTALITY
The Peaches of Immortality are found in the east Garden of the Divine Concubine of The Enlightened Goddess. Eating one of these peaches bestows 3,000 years of life. However, they are protected by the Wardens of Heaven and the punishment for eating the peaches without permission is death and lowly rebirth.

NEW RITUAL: BASKET LADDER TO THE SKY
This Ritual requires you take something woven like a basket or fabric and unwind it to create an exceptionally long strand into the Sky. Make a Ritual Roll TN 9. On a Success you make a long strand that rises into the sky and can take you into the clouds. On a Total Success the strand penetrates the Heavenly Realms and you reach a random place in Heaven. On a Failure Supreme Judge Yu detects your attempt and comes to seize you.


*These are the infamous immortality peaches that Monkey ate in Journey to the West.
Posted by BEDROCK GAMES at 9:46 AM