GAMING STRANGE TALES FROM A CHINESE STUDIO: THUMB AND THIMBLE AND SCORCHED MOTH THE TAOIST

I have been making NPCs, Monsters and scenarios inspired by stories in Strange Tales from a Chinese Studio by Pu Songling. I am using the Penguin edition, translated by John Minford, which has 104 translations from the original. Today I am doing Thumb and Thimble (#28) and Scorched Moth the Taoist (#29). You can see my previous entry HERE. 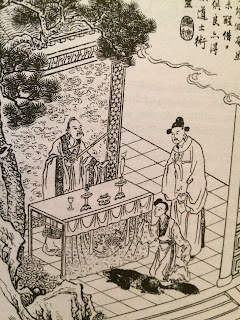 Thumb and Thimble is about a child bride who gives birth to a tiny baby. I will skip over the first bit and focus on the diminutive human aspect of the tale (for obvious reasons). This was actually a bit of a challenge, since I had to consider other small creatures and had very little wiggle room for the Max Wounds (regular humans without Qi ranks are Max Wound 1, so they couldn't be that).

Scorched Moth the Taoist is another about a fox spirit and a Taoist exorcist. The fox spirit in this story is rather powerful, so I want to focus on building a unique fox spirit (since we already have plenty of rituals and talismans in the Ogre Gate rulebook).

Note that Spirited Beasts are technically termed 'Demons' in the Wandering Heroes of Ogre Gate Rulebook, so the entry below is consistent with that. But Fox Demon is interchangeable with Fox Spirit in the setting. Each one is unique and that is what I attempted to capture in the entry.

THIMBLE-SIZED MAN
Men of this size grow no bigger than a thumb and are born the size of a thimble. Exceedingly small they are obviously fragile and either tend to be discarded at birth or protected and hidden from the dangers of the world. Therefore they are often found by accident, and those who are abandoned live as wild men in the forest or hills. Many have been surprised to find Thimble-sized Men lurking in a cabinet or beneath the floors. Occasionally they band together and are clever enough to cause troubles.

Easy-to-Wound: Thimble-Sized Men are easily harmed. There is no need to roll damage against them. If they are successfully hit with any attack that would normally do damage (even a non-lethal one) they die.

Powers
Drain Qi: On a Successful Arm Strike or Grapple Attack, instead of doing Damage, Yang Zhi can drain Qi equal to damage. Those drained recover at a rate of 1 per day, and during that time her Max wounds increase by 2. Such increases are permanent if they drain the person to death. She also learns one Kung Fu Technique per level of Qi drained from the target.
Bite: Yang Zhi's bite does open damage. When she opens her mouth she can make her teeth into long dagger-like blades.
Shape Change: Yang Zhi can appear as a fox or human (or a hybrid). She can fly in all her forms.
Immunities: Yang Zhi is immune to all normal Attacks, only taking Damage from Kung Fu Techniques Qi level 4 or greater. Also any weapon made from Jade can harm her.
Captivation: On a successful Persuade roll against any target, the Yang Zhi can cause a captivating effect. She can maintain one captivation at a time.
Borrow Appearance: Yang Zhi can assume a person's appearance, so long as she spends 10 minutes of time with the individual. This lasts as long as she desires, but fades if she takes more than 10 wounds.
Healing Touch: Yang Zhi can heal 4 wounds by touch.
Illusions: Yang Zhi can make potent illusions with sound, imagery animation. These can cover a 20 foot area. Roll Deception against the Wits of the viewer. On a Success the viewer detects no imperfections in it. On a Failure the viewer still sees the illusion but notices subtle imperfections.
Boundless Journey: Yang Zhi can travel hundreds or thousands of miles in a round as a Skill action.
Control Air: Yang Zhi can control the local air, creating minor weather patterns (such as rain, fog or wind). This can also be used to hurl small objects at targets for 2d10 Damage. she uses her Command Roll for this.
Rebounding Possession (Counter): Yang Zhi can attempt to take possession of anyone who strikes her physically as a counter (she can also use this ability by gazing into a Person's Eyes and rolling Command against Resolve). Anytime she is attacked with a melee strike, she can roll Command against the Attack Roll. On a Success she avoids the attack entirely as the person loses their nerve. If her roll also beats their Resolve, she takes possession of them for 1d10 hours. On a Total Success she takes possession for 1d10 days. She can possess up to ten targets at a time while still controlling her own body (or she can have her body vanish into the people she has possessed).
Key Kung Fu Techniques (Waijia 1, Qinggong 1, Neigong 1, Dianxue 1): Biting Blade, Breath of Fury, Croak of the Toad, Fierce Strike, Finger Flick, Fluttering Kicks, Flying Swan Kick, Hands of the Hawk Beak, Heart Smashing Palm, Inverted Three Point Strike, Kick of the Swan, Leap of the Swan, Mighty Paws of the Lion, Phantom Phoenix Sword, Storming Daggers, Deflecting Canopy (Counter), Grasp of the Python (Counter), Horizontal Sidestep (Counter)
Posted by BEDROCK GAMES at 12:51 PM