GAMING STRANGE TALES FROM A CHINESE STUDIO: THE PAINTED WALL

I recently started blogging scenarios and monsters inspired by Strange Tales from a Chinese Studio. You can read the first entry for a deeper explanation of the source material and the intention of these blog entries. This one is for the 6th story in the penguin edition, The Painted Wall. I decided not to do Talking Pupils (the 5th story) because the monsters in it seem curious and interesting but less interesting to me as a hook for adventure unless there is some railroading. I may come back to it though because I think it could be the basis for a cool scenario if I ran with some of the concepts. 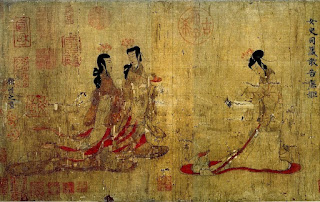 In The Painted Wall, a man named Zhu goes to a monastery and finds a wall mural that pulls him into a world of Apsaras. By the end of the tale, a monk at the monastery suggests his experience is an illusion that comes from within. In order to make this one work, I am tailoring it to the Qi Xien setting and giving it a more immediately hostile threat (because the danger in the original tale is contingent on the protagonist falling in love with one of the apsaras).

Also I should note that I've already taken inspiration from this story. The wall scroll in the Ogre Gate Inn Book was a nod to The Painted Wall.

MAGIC MURALS (OBJECTS OF POWER
Magic Murals are gateways to pocket realms or the inner worlds of the viewer. They vary but most depict the inhabitants of the pocket realm in question and many serve as a trap for unwary viewers. Others serve as a test for religious seekers or martial heroes. There are two basic types of Magic Murals: those that lead to other worlds and those that lead to inner worlds. The end experience is pretty much the same, but the latter are illusory while the former take you to genuine places. The consequences for entering another world can be deadly. The consequences for entering an inner world, can sometimes be deadly but usually just result in a sense of exhaustion. Whatever their precise nature, all Magic Murals affect anyone who looks into them for more than a few moments. Magic Murals to other worlds roll 3d10 against the target's Resolve. Magic Murals to inner worlds roll 3d10 against Wits. If the roll succeeds the person is pulled into the mural for an hour. On a Total Success the person is pulled into the mural for day. To onlookers the individual seems like a painted figure in the mural. The person drawn into the mural experiences the world as if it is a real place.

Viewers can attempt to extract people imprisoned in a mural by placing their hand on the wall and concentrating. Each attempt takes ten minutes and requires a Meditation Roll TN 10.

PALACE OF BEAUTY (SAMPLE MAGIC MURAL)
The Palace of Beauty is a wall mural found at Sun Mai temple. It is used to test the cultivation of high ranking disciples before they become abbots. Anyone who fails the test cannot become an abbot for five years (at which point they can take the test again). The Palace of Beauty is rendered on a wall in the temple's courtyard and depicts eight beautiful maidens in what seems to be a heavenly palace. In truth these are female Yaksha demons imprisoned by one of the early builders of the temple. The test is very real. The maidens use their beauty to lure unsuspecting disciples to their deaths. While the monks of Sun Mai do their best to extract anyone who falls victim to the Yakshas, but all go in knowing they could die.

BEAUTIFUL YAKSHA DEMONS (8)
Beautiful Yashas appear like lovely human maidens when they are not feeding. However as soon as they attempt to feed they reveal their true form: small twisted creatures with gray skin and blood red hair. They have long narrow claws that can draw out human blood. They also have some different abilities from normal Yaksha.

Powers
Devour: The teeth and mouths of Beautiful Yaksha Demons are exceptionally large and lethal. They deliver 4d10 Open Damage on a successful bite.
Blood Nail: The fingernails of Beautiful Yaksha are narrow and sharp, ideal for puncturing veins. When they hit with their claws, on a Total Success, they cause the target to bleed profusely (1 Automatic Wound per round until the bleeding is stopped). They can also use this to help feed on sleeping victims at night.
Entrancing Song: The Yaksha can sing or play a gentle melody that makes it difficult to move like a terrible nightmare. Roll their Talent (Singing) or Talent (Guzheng) against Resolve. On a success the person falls suffers -2d10 to their Speed for the purposes of Turn Order and calculating movement for ten minutes. On a Total Success the target cannot move for ten minutes (but they can attack and perform other skill actions).
Immunities: Beautiful Yaksha Demons are only harmed by energy attacks and heat. Peony flowers are particularly harmful to them (exposure to the petals of a peony causes them to take 2 wounds).


Spiteful Burst: All Yaksha do not like being captured and would rather die than be forced to cultivate or reform. They can explode themselves in a blast of burning blood. Roll 4d10 against the Evade of everyone in the area. Those affected take 5d10 Fire Damage (no need for Total Success to function as the blood sticks to anything it comes in contact with).
Regeneration: Unless they are killed by Peonies, the Yaksha in the mural reform within 8 hours after being destroyed.