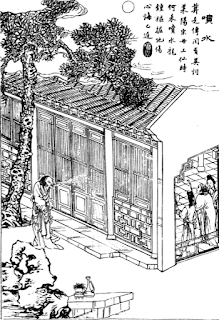 Strange Tales from a Chinese Studio by Qing Dynasty poet and official Pu Songling is a collection of wondrous tales and accounts. Published as early as 1740, it contains nearly five hundred stories of unusual events and creatures. It is filled with tales of fox spirits, strange snake charmers and ghosts. These stories have inspired countless movies like A Chinese Ghost Story and Painted Skin. They are also great inspiration for gaming. I am going to attempt to turn entries from Strange Tales into gameable content for Wandering Heroes of Ogre Gate. My intention is to go through each story, ignoring or coming back to the ones that might be tough to fit into an adventure. Some will be simple monster or NPC entries, while others will be more complete scenarios loosely inspired by the tales.

For this I am using the John Minford translation in the Penguin Classics 2006 edition. I decided to skip making the first story, Homunculus, into game material because it would require developing other aspects of the game system. While An Otherworldly Examination (story number two) isn't as gameable in my opinion, the next story, Living Dead, most certainly is. However I think I want to use that as inspiration for a complete scenario so I will come back to it. The following monster entry is inspired by Spitting Water, the fourth story in the Penguin edition. It is about a group of women who encounter the hunchbacked ghost of an old woman that spits water in ferocious bursts. Because so many of these stories get right into the strangeness of the tale, they are easy to mine for gaming inspiration.

Water Corpses look as they did in life except they appear warped and swollen. They are mad with delight and anguish, dancing with abandon, spewing drowning gushes of water at the innocent. They are created when the buried or forgotten remains of a person becomes water-logged. Water Corpses cannot travel far from their remains, they must stay within 100 yards of their burial site.
Defenses: Hardiness 4, Evade 6, Parry 3, Stealth 7, Wits 7, Resolve 4
Key Skills: Bite and Claw: 1d10, Spitting Water: 3d10 (see below), Speed: 2d10, Detect: 2d10

Powers
Bite: The bite of a Water Corpse does 1d10 damage.
Deathless: Water Corpses take damage normally but when they are destroyed they return in 1d10 hours. The only way to truly defeat them is to lay their body to rest.
Spitting Water: Water Corpses release a spout of water from the mouths attacking everyone in a 40 foot cone. Roll 3d10 against the Evade of all targets. On a Success anyone struck is coated in water that causes them to suffocate for the next three rounds (WHOG, Suffocation and Drowning, page 83). On a Total Success the targets suffocate for the next 4 rounds. The water coats their pores and lungs, making death extremely uncomfortable.
Bound to Body: Water Corpses must remain within 100 yards of their body.
Posted by BEDROCK GAMES at 12:03 AM