GAMING STRANGE TALES FROM A CHINESE STUDIO 40: THE LAUGHING GIRL 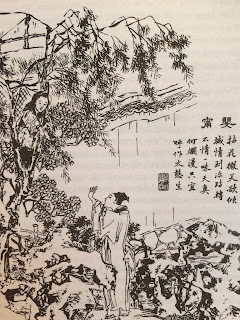 I have been making NPCs, monsters and scenarios inspired by Pu Songling's Strange Tales from a Chinese Studio. For each entry I take two or more stories from the Penguin Edition translated by John Minford and make gameable material. You can see my previous entry HERE. Today I am doing The Laughing Girl (#40).

The Laughing Girl is one of the longer tales in the book. I decided to give it its own blog post. Later today I will hopefully also do an entry for The Magic Sword and the Magic Bag. The Laughing Girl is about a man named Wang Zifu who falls in love with a girl he sees at a ghost festival, then grows sickly when he cannot find her later. His cousin Wu tries to help him by pretending to have found her 10 miles out of town in the hill region and claims she is in fact also his cousin. Despite their relation, he believes he can arrange a marriage. This is a lie (he hasn't found the girl at all) but brings Wang back to health. Eventually Wang grows impatient at cousin Wu's delays and walks ten miles into the hills himself. There he finds a small homestead with an old woman, a servant named Petal and the girl he met at the festival (whose name he discovers is Ying Ning). The old lady says she is his mother's sister and that Ying Ning is the daughter of her deceased husband's concubine. Ying Ning laughs incessantly and seems incredibly naive, but Wang brings her back to his home and eventually marries her. His mother informs him that her sister died long ago and by the end of the story he discovers that Ying Ning is the daughter of his Uncle and a Fox Spirit. He also learns that the old woman who raised her was a ghost.

I love how the little details make you question the reality of what is going on, but how the details of the love story all seem so plausible and everyday. Ying Ning seems like a real person, as does the old lady. Their interactions with Wang are all fairly mundane and normal except for some minor clues. However looming over the whole thing is the lie told by the cousin, which suggests there shouldn't be a house in the hills in the first place. Yet it all comes true. I was half tempted to spin a scenario out of that idea itself. However, I like Ying Ning and Wang Zifu as characters so I decided to turn them into a heroic couple. I also like how Ying Ning is presented. She isn't malicious, and the one time she kills someone in the story it seems to be more a way of protecting herself through a subtle enchantment. The story also has more humor than some of the others.

YING NING AND WANG ZIFU
For this one I decided to make a haunted heroic couple based on the characters in the story the Laughing Girl. I took some liberties to make the haunting more gameable (in the story the supernatural elements are all rather benign toward the couple). I also took some liberties with naming and streamlining background details. In the story, Ying Ning is raised by a ghost and not knowledgeable of some basic things (though there is also the suggestion or hint that there is a lot more to her than meets the eye). The only Flaw in the game that would match this well is Unintelligent, but that flavor description does not fit Ying Ning well. I opted to use the same mechanics from that flaw but call it Wild Child to avoid misleading the GM about her personality. Ying Ning seems smart to me, but not well trained in normal human activities.

Background: Wang Zifu and Ying Ning are a husband and wife. He is a high-born scholar, while she is a half-fox (born from the union of Wang's uncle Qin and a fox spirit). Ying Ning was raised by the ghost of Wang's Aunt Wu (the deceased wife of Uncle Qin). Wang Zifu fell for Ying Ning when he spotted her at a local festival and spent months sick with love. He finally learned she lived in a cottage ten miles out of town. There he met his long lost Aunt Wu (not knowing she was a ghost) and made arrangements to marry Ying Ning. They married and soon after she moved into his manor, they began experiencing hauntings. People around them would die from flying objects. Ying Ning confessed she was a half-fox and that Aunt Wu was a ghost who raised her (Wang had recently learned from his mother that Aunt Wu had died long ago, and a cousin informed him there were rumors that Uncle Qin wasted away at the hands of a Fox Spirit soon after). They resolved to lay Aunt Wu's spirit to rest together but when they reached the cottage they found it looted and her grave site empty. They set out to find her and along the way were forced to learn Kung Fu so they could survive. They met a Nun of Heiping who agreed to train them both and have slowly become martial heroes in their own right as they search for the remains of Aunt Wu.

YING NING
Ying Ning is a half-Fox, born from the union of Mr. Qin (Wang Zifu's widowed Uncle) and a fox spirit. Her father was drained and killed by the Fox Spirit, but the Fox Spirit gave birth to Ling Ning and entrusted her to the care of a Qin's deceased wife Wu who raised her. When she was marrying age, Ling Ning met Wang Zifu, who fell in love when he saw her at at a local festival, and married him. However they found their lives haunted by Aunt Wu and soon committed to finding her body and putting it to rest. When they found her resting ground, the body appeared to be stolen and they've been searching for her remains ever since.

Ying Ning seems naive and playful, frequently laughing when it is inappropriate to do so. She even appears to be easily tricked. However this is really a veneer. Her true personality is quite serious and resolved to bring her adopted mother's spirit to rest. She often uses her innocent appearance to her advantage, tricking the tricksters. However she wasn't raised by living humans so is surprisingly ignorant of certain customs or facts.

WANG ZIFU
Wang Zifu is the husband of Ying Ning. He cares deeply for her and does not mind that she is a half-fox. He is fully committed to helping her lay her mother to rest. He is easily given to worry and falls ill quickly. But he is braver than he appears.

AUNTIE WU
Auntie Wu is a benevolent spirit who raised Ying Ning before she met Wang. When Ying Ning and Wang departed to get married, she felt content. However an evil cult dug up her bones and turned them into an animated skeleton to use in performances. This has filled her with anger and prevents her from resting.

Auntie Wu appears as a kindly old woman but must remain within 400 feet of her bones. She is presently with a traveling cult of performers and will often wander around asking if anyone has seen her adopted daughter, Ying Ning.

Mental Strike: When she is angry or fearful, her love for Ying Ning and Wang creates a storm of energy around them that attacks everyone in the area by sending flying objects and debris in a 30 foot area. Roll 3d10 against the Evade of everyone in a 30 foot area. On a success they take 4d10 Damage. On a Total Success they take 4d10 Open Damage. This happens any time she is fearful. She isn't trying to harm anyone. It is an unintentional reflect to protect her adopted daughter.
Destroying/Laying to Rest: Auntie Wu can be laid to rest by properly burying and venerating her bones. If her bones are completely destroyed, she is also destroyed. Her ghost form is not harmed by normal attacks, only magic or energy attacks harm her. However this does not kill her permanently. Only Ritual magic, Immortal Powers or the hand of a deity can truly destroy Auntie Wu.