GAMING STRANGE TALES FROM A CHINESE STUDIO: WILD DOG, PAST LIVES, AND FOX IN THE BOTTLE

I have been making NPCs, monsters, and scenarios inspired by Strange Tales from the Chinese Studio by Pu Songling. You can see my previous entry HERE. This is sort of a daily challenge for myself and also a way to make stuff for fans of Ogre Gate. My hope is by the time I finish this series, people will have an easy way to bring the stories of Strange Tales from a Chinese Studio into their game. If you haven't read it, I highly recommend it as it is a very good resource for Gamemasters and an entertaining read. For this blog series I am using the Penguin edition translated by John Minford. I just happen to like that translation. It contains 104 of Pu Songling's tales. 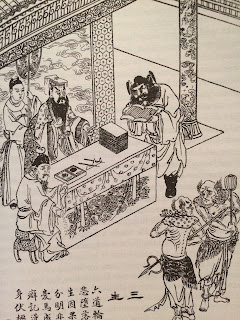 This time around I am doing Wild Dog (#24), Past Lives (#25), and Fox in the Bottle (#26). The Wild Dog is a bizarre story that almost becomes comical in its depiction of rising corpses. However the source of the corpses is tragic, because they are the slaughtered remains of men put to death by the Manchu as they attempt to quell a rebellion. In the story a man hides among a mass of decapitated corpses to evade the overzealous soldiers, and the corpses rise up in fear as a wild dog approaches to eat their brains. For this one I came up with some fun monsters. I liked the idea of things that seem like zombies at first but could actually be helpful. The next story, Past Lives, is one of my favorite. It is about a scholar named Liu who can remember his past lives because he emptied out the 'soup of oblivion' while the King of Hell was looking the other way. We get to see Liu living life as a dog and a horse. When he finally becomes human, he empathizes with animals because he knows what it is like to be a beast of burden. The descriptions in this chapter offer some interesting observations. I decided to expand my past lives table a bit (placed it last because it is longer than the other entries). Fox in the Bottle is about a Fox Spirit who possesses a woman during the day and retreats into a bottle at night. It is short and to the point, but could serve as the basis for an interesting scenario or encounter.

WILD CORPSE DOG
These ravenous creatures eat human brains and are particularly fond of flesh that has begun to rot. They look like dogs, capable of standing slightly upright, with powerful jaws and 4-inch long teeth. They use these to break open their victim's heads and devour the delicate tissue inside. 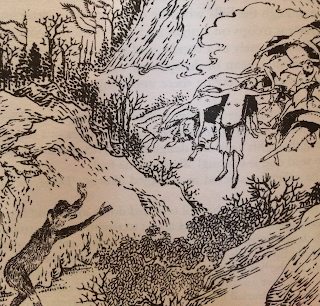 These are the slaughtered remains of the innocent. Good people who died at the hands of the corrupt or powerful. They look like the pallid coprses of dismembered people but can still talk. Some are decapitated, others missing limbs or digits. They tend to lie in massive heaps as they were left, then animate when they think no one is around. They are afraid to die again, so play dead until things seem safe. However if they are engaged and a person gains their trust, they can be friendly and provide useful information. Cowardly Corpses are particular favorites of the Wild Corpse Dogs. There is a 2 in 10 Chance of a Wild Corpse Dog showing up when characters encounter Cowardly Corpses.

Hide: Cowardly Corpses are afraid of people and monsters. Anytime someone approaches, they pretend to be lifeless. Anyone looking at them just sees dead bodies. However on a Detect TN 10, movement is discernible.
Knowledge: Cowardly Corpses protect themselves with knowledge of monsters, places and history. They are usually found in groups and pool their memories efficiently. This makes them particularly helpful if their trust can be gained.
Dead: Cowardly Corpses can be destroyed through normal attacks but they are particularly tough to destroy. This is reflected in their high Max Wounds. But Mundane attacks are harmful to them.

BOTTLED FOX
Bottled Foxes are young Fox Spirits who can possess humans and turn into a plume of vapor capable of receding into a vessel or container. They can also take the form of a small fox. They like to take over people, but are not particularly convincing when they possess someone. Bottled Foxes are so named because they are often found in bottles or similar objects where they like to hide in wait before possessing a target.

Possession: To take possession of a target the Bottled Fox rolls Command against Resolve. On a Success it takes over the body for 1d10 hours. Anytime they want the person do act, they must make another Command roll. On a Failure, the target briefly breaks through and the effect is their expression looks pained and their body flails a little. This also allows the victim to say something before being overcome by the Fox Spirit again.

Vapor Form: A bottled Fox can take the form of a vaporous substance, allowing them to pass through narrow spaces and into small containers. They can stay inside a bottle in this form for years. They cannot be harmed by most attacks in this form, but energy attacks, such as Qi, cold, fire, etc can harm them while in Vapor Form.

Simply roll on each table, then on each table that follows provided it seems appropriate to do so for your result. This will give you an idea of who the character may have been in a past life.