GAMING TALES FROM THE CHINESE STUDIO: BITING A GHOST AND CATCHING A FOX

I've been creating scenarios and monsters inspired by Pu Songling's Tales from a Chinese Studio. You can see the previous entry HERE. You can also see the first entry where I talk more about the idea HERE. The next entries are Biting a Ghost and Catching a Fox. Both are short accounts of encounters with rare creatures while drifting to sleep. 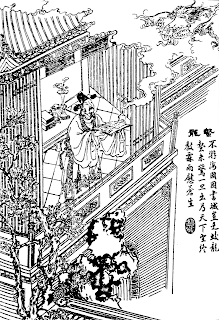 Many of these entries have fear-based effects or similar abilities. Most are not identical though, as I am tailoring them to how I felt they operated in the individual entries.

I am going by the translation in the Penguin edition as well as footnotes. For these stories I had no footnotes to go on, so didn't have the original names of the monsters in question. These freed me up a bit to use them as loose sources of inspiration.

Also I had a thought last night about running Strange Tales one shots for Ogre Gate (I will try to write more about this later in the week). Obviously these kinds of scenarios can be part of a regular Wandering Heroes of Ogre Gate campaign, either as encounters or adventures. But you can also do one-shots with regular, non-martial hero characters. I will try to come up with some basic guidelines for such an approach but essentially these are characters with zero Qi ranks and no Kung Fu abilities. They might have access to Rituals but that is about it. Therefore they would also have 1 wound. Again, I will try to make a blog post about this in the future.

THE BITTEN GHOST
Bitten Ghosts appear when people are falling asleep, usually just as they are beginning to drift off. It is unclear if they are a real physical presence or if they are a product of the dreamer's thoughts. Either way they usually appear as recently deceased corpses in mourning or burial attire. Their features are bloated and pale, and they wear an enigmatic expression that triggers fear. They land themselves on the dreamer's body, pinning them down with great force and slowly draw out the victim's life energy with their nostrils. The arms of a bitten ghost hang uselessly at its side. Though they are vulnerable to bites, this fact is not widely known.

Bitten Vulnerability: Bitten Ghosts are vulnerable to bites. They recoil and flee instantly when bitten by human teeth and always take 4 Extra wounds from such attacks.

Weight of Many Corpses: The body of a Bitten Ghost feels quite heavy. If they succeed on a Grapple roll against the target, the person is pinned and must make a Muscle roll to lift the equivalent of 550 pounds to escape (see page 81 of WHOG rulebook*)

Life Drain: When a Bitten Ghost's nose is close to a person's mouth it can attempt to draw out the target's life. Simply roll 3d10 against Parry. On a Success the person loses 1 Qi or 2 Hardiness (always begin with Qi then move to Hardiness). If the target is unable to make Skill rolls due to fear, then it does not need to make an attack roll for this. This is particularly depleting. These recover at a rate of 1 per week.

Immunities: Bitten Ghosts are only affected by magic weapons, rituals, and Kung Fu Techniques. Each one is also vulnerable to a key substance (based on its personal history). However they are vulnerable to human teeth (see bite vulnerability above).

THE SHIFTING FOX
This weak spirited beast is a fox with exceptional shape-shifting abilities. It can take any form it wishes, but it cannot alter its size. They take possession of people, usually those who are asleep, and use the bodies to experience the pleasures of the world. They look like a  normal fox except their mouths are green.

Shift Shape (Counter): Shifting Foxes can change their shape to any form they wish, but they cannot change their size. They can use this to make their body long and narrow like a tube or round like a ball for example. This can also be used as a counter to evade any attack or escape any grip. Because of the free-form nature of this ability it can do anything from deflection to dodging.