I have been making NPCs, monsters and scenarios inspired by Pu Songling's Strange Tales from a Chinese Studio. For each entry I take two or more stories from the Penguin Edition translated by John Minford and make gameable material. In this post I will do A Latter-Day Buddha (#37), Fox Enchantment (#38), and Eating Stones (#39). You can see my previous post HERE. I've also placed links to all the entries in the menu to the right (as well as links to other wuxia-related blog posts). 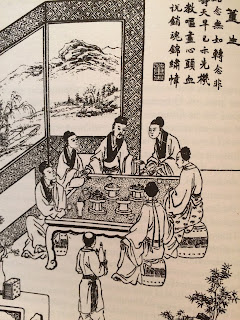 A Latter-Day Buddha is about a man who becomes an ascetic monk who dazzles onlookers by eating excrement and filth, then claims to be a living buddha. He attracts an enormous following with his antics. This one is really short and more of a commentary or satire than tale, but it got me thinking about followers in Wandering Heroes of Ogre Gate. I decided to see if I can tweak the Sertorius Disciple Rules to fit the setting.

Obviously bringing this kind of creature into a campaign can present challenges and risks. Personally the way I would to it is have the fox target an NPC rather than PC, likely as the center of an adventure. I might run it similar to a vampire or ghost hunt. I think having the fox go after a player character presents too many difficulties (at least for me as a GM). If your group is fine with it though, that can definitely work as well. I would just advise reading the room carefully and being sensitive to peoples' reactions.

Eating Stones is a strange story about a man who eats rocks for food. It is a little like A Passion for Snakes in that respect. This is a tough one to game but I decided to make a new type of Kung Fu around it that is slightly more potent than techniques in the rulebook provided the player eat stones every day. These techniques are more potent spins on existing techniques in the book.

ENCHANTING FOX
An enchanting fox look like beautiful women but are actually Fox Demons. They drain men of their essence by sleeping with them and using the energy to cultivate. Eventually they can become great martial arts masters or enlightened sages through these efforts. They are sensitive to incense.

Enervation: Enchanting Foxes cultivate by draining ejaculate. Every time they do this, they gain 1 point of Hardiness (which the target loses) and if they kill the person, this becomes a permanent rank for Qi for the Enchanting Fox. If they are lucky enough to seduce and drain a martial hero, once they have reduced them to 0 Hardiness, they can keep them on the brink of death and drain Qi each time (killing the Martial Hero if they are reduced to 0 Qi).

Kung Fu Techniques: When they reach Qi 8, Enchanting Foxes being to master Kung Fu techniques if they choose.

Incense Vulnerability: Incense disturbs Enchanting Foxes, imposing a -1d10 Skill penalty on them and eventually causing them 2d10 Damage each round they are in its presence.

STONE EATING KUNG FU
This is a set of techniques that require the user eat nothing but stones. One of the problems with eating stones is they can harm the body. Twice a day the Stone Eating practitioner must eat a handful of rocks. Doing so inflicts 1d10 Damage every time. Provided they do this, they can use the following techniques if they have mastered them.

You inhale deeply and imagine the pebbles and sand around you gathering into a mighty swirl to assail your foes. This unleashes a horrible blast against them.
Make a Meditation Roll against the Evade of everyone in a 10 foot area per rank of Qi. On a Success you unleash a potent storm of pebbles and sand that do 3d10 Damage plus 1 Extra Wound per rank of Neigong.
You must eat stones twice a day to perform this technique and there must be pebbles and sand in the area for it to work.


Cathartic: The area becomes 50 feet per rank of Qi and does 3d10 Damage plus 2 Extra Wounds per rank of Neigong.

You generate energy into your fist, causing it to become hard as a rock and heavy as a boulder.
Make a Meditation Skill roll against TN 7. On a Success your fist becomes hard and heavy. While in effect any strike you deliver causes opponents to lose 2 points of Hardiness on a Successful Damage roll and sends them back 5 feet per rank of Neigong.
Lost Hardiness returns at a rate of 1 per week.
Cathartic: On a Successful attack and Damage roll, you cause your opponent to lose 3 points of Hardiness and send them flying back 10 feet per rank of Neigong.

Your head is hard as stone and can be used like a shield as well as a weapon.
Roll Arm Strike at -1d10 against the Attack roll of any melee. On a Success you lean into the blow with your head, absorbing it harmlessly and slipping in to strike the opponent for Muscle+0d10 Damage.
Cathartic: When used Cathartically you deliver Muscle+3d10 Damage and do 1 Extra wound equal to Neigong.

RELIGIOUS FOLLOWERS IN WANDERING HEROES OF OGRE GATE
This is a modified table from Sertorius to fit the Ogre Gate setting. The way you use it is you check every month to see if a character has attracted religious followers or martial disciples and what is occurring with their organization of followers. For each character simply make a roll each month that they do something that would warrant attracting a following. If they don't have a following use "Leader Present" column. If they get the result 1d10 new followers, they attract people to them. Then each month roll again to see what develops. I will describe what each result means below. But first there is a cap on how many followers anyone can have and it is based on Qi rank. Occasionally extraordinary individuals will exceed this cap due to cunning or having a profound teaching, but for the most part this cap holds. This is all very rough, definitely not gospel.

TABLE RESULTS
Roll on the table below once each month. These are the descriptions of the different entries. This is based on the follower system we presented in Sertorius.

Use the column reflecting who is managing the organization directly at the time. The Leader is the PC in question. If the PC is present then his or her will is more easily exerted. If he or she leaves a priest, monk or subchief then they still have a modicum of control. But if the followers are left undirected or are under the influence of an antagonistic force, then the results get much worse. Use the column that makes the most sense. Note that you an organization divided into sects could get two different results from a single roll for each branch.

Minor Negative Development: A small problem occurs in the organization, usually this involves a rabble rouser or outside antagonistic. The result can be up to a loss of 10% of the total numbers or problems with local authorities/locals. Typically this doesn't result in anyone being killed just bruised feelings and enmity.
Major Negative Development: This is a potentially violent development like a feud with another organization or martial sect, the rise of a dangerous new initiate within the order, or serious problems with local authorities. Followers may also start re-interpreting or ignoring rules. This can result in up to 30% loss of total numbers.
Catastrophic Negative Development: This is violence within the organization or with a serious group outside it. The very existence of the organization is threatened. People may start interpreting your rules in a dangerous new way, someone within the structure may be trying to seize power, or an outside force could want to destroy you.
Unusual Development: This is not necessarily good or bad, but it is strange. Your followers may start seeing signs or omens, perhaps someone or something unusual appears at the temple or headquarters.
Minor Positive Development: The organization continues to follow your teachings and makes progress toward goals you've set for it.
Major Positive Development: Your organization followers your rules, completes a major goal or otherwise has some large positive development. You also gain 1 new follower.
Followers Heed: This simply means your followers heed whatever instruction you have given them this month.
Resolution: A problem within the organization is resolved.
Unification: Any branch or new sect that you desire can be brought back into the organization.
New Sect: A new sect branch of 1d10 followers forms within your organization. They still follow your teachings but focus on some particular aspect or incorporate a new idea (such as the veneration of a new deity or virtue).
Antagonistic Sect: A group of 1d10 followers breaks away from your organization and promotes teachings hostile to you. They reject your ideas and beliefs and want to replace them with their own. Each month they grow by 1d10 more followers.
1d10 New Followers: You can 1d10 new followers over the course of the month.

*Wandering Heroes of Ogre Gate rulebook.
Posted by BEDROCK GAMES at 11:05 AM