I love classic Orcs. I think they are a great monster for fantasy campaigns and quite enjoy playing your basic half-orc Barbarian. There is a lot to admire about Orcs: their physical strength,aggressiveness and bravery are traits I find appealing. But they are also pragmatic, restless, and prideful. Taken to the extreme these can all be bad qualities, but when we set out to make Gamandria, we sought to play out these traits in more favorable circumstances. What would a successful Orc civilization look like?

Before I get into that, we should look at the Orc entry from the Sertorius rulebook. I've pasted it here for convenience: 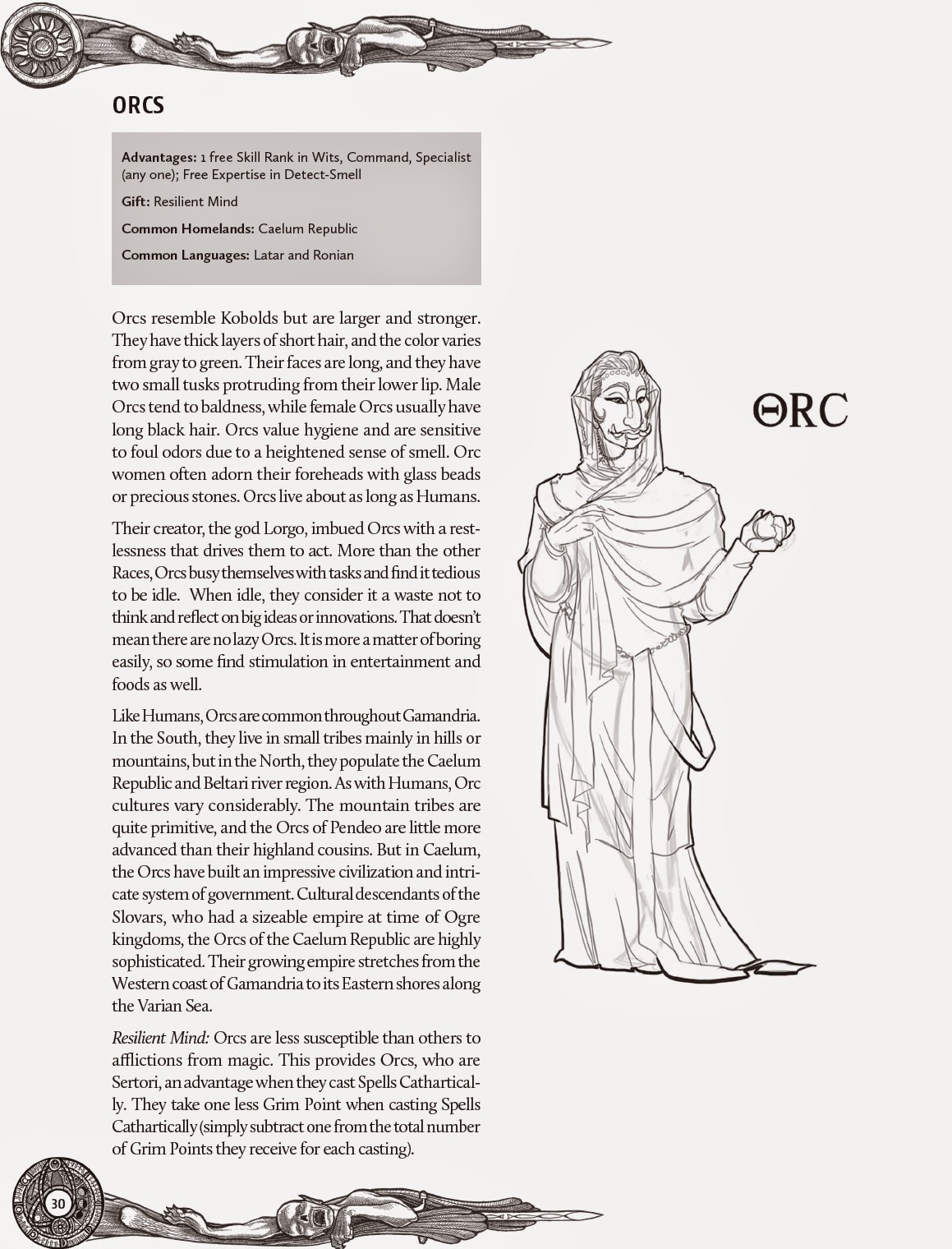 Mechanically they get some nice benefits: A free rank in Wits, Specialist Skill and Command. They get an expertise in Smell (which improves their Detect roll when odor is involved) and they gain Resilient Mind (making them less susceptible to magical transformation).

As you can see we focused on two characteristics from the beginning: restlessness and a heightened sense of smell. Our Orcs are industrious and intelligent because of this Restlessness. They also have a keen sense of smell and that is important. If you've ever known anyone with a strong olfactory system, you notice they don't usually care much for foul odor. A person who can smell well is going to have a lower threshold for things like poor hygiene than someone who smells cannot smell well. Applied to a fictional race, it made sense that our Orcs would be concerned with hygiene and cleanliness. Already we were picturing something very Roman and this just added to that overall image. So we decided our Orc civilization would take its inspiration from the late Republic/Early Empire.

The Orcs of Gamandria are also mentally resilient and tough. Though Restless, they are not as easily phased as humans. This is particularly important when it comes to using magic, where they can shrug off the consequences of overuse more than others. The first recorded instance of a Sertori (a spell-caster in our setting) was an Orc, so it is also possible that they've simply been exposed to magic longer than the other races and have mentally and physically adapted.

We didn't set out to make a black and white world. Every culture has its good and its bad qualities. The Orc civilization of Caelum has many positive features. They have established a well ordered society based on clear rules of law and they are one of the more inventive cultures on the continent. In fact Caelan books on architecture and engineering are prizes all over the world. Their political system is advanced, though it faces challenges, and they have devised a clever institution for keeping the powers of Sertori in check. However they do have negative qualities as well. Like many societies in Gamandria (which is based on the ancient world) they still use slaves. They also can be terribly efficient in wartime.

However Caelum isn't the only place Orcs live. They also live North of Caelum in Atroxis, where they are divided into tribes and worship an Ice Lich named Ozias. While this is more in keeping with the traditional notion of the Orc, we tried to balance this view out as well. They may seem like an evil society from the outside but we still wanted to bring admirable qualities to them, and we wanted to try to understand what a culture built around a lich-god might actually look like. Over the course of our Orcs of the North Campaign it became clear to us that the Orcs of Atroxis worship Ozias as a kind of merciful figure and find hope in the prospect of being resurrected by the lich or brought back as a form of undead. From their point of view, Ozias a positive force. They are still more rugged and less civilized than the Caelum Orcs, but they are not mindless or heartless. We'll be including some additional information on Atroxis (beyond what exists in the rulebook) in our upcoming free module The Heart of Atroxis.

One of my favorite sections of the book is the Legend of Cael and the Legend of Sola, which describes two major events in the History of Caelum. Both stories highlight the indomitable nature of the Orcs and shed light on their resourcefulness. The Legend of Cael is about the founding of the Caelum capital. It describes how an Orc Chief (named Cael) brought his people to the foot of Mount Lorgo (home of the god Lorgo) because he liked the hot springs and felt worthy of settling near the presence of a god. However Lorgo hated the sounds and smell of the Orcs. He asked them to leave and Cael refused. Eventually the two fought an epic battle. Keep in mind mortals can't harm gods in this setting, it is pretty much impossible except in very rare instances. After Lorgo broke his body, by sheer will Cael managed to rip out one of Lorgo's tusks and battered the the god with it. Greatly impressed by the Orc's determination and fortitude, Lorgo agreed to let the Orcs live near Mount Lorgo provided they bathed daily and treated him as their supreme deity. Local Orcs believe that centuries of effort to avoid offending Lorgo's hatred of odor led to their strong sense of smell.

The Orcs of Gamandria are not only one of my favorite races, they are one of the most important ones. The first Sertori was an Orc. The word Sertori comes from his name: Sertorius Poro. So the game is named after an Orc word. I like our Orcs, they are intelligent, tough, a little bit finicky and extremely resourceful.