ORCS OF THE NORTH: AN AUDIENCE WITH OZIAS

We continued our Sertorius campaign and our efforts to oversee the marriage of Orthu and Anaree. That is described in a previous blog entry. This session we also worked to help the King's plans against Caelum and were granted an audience with Ozias the Lich-god himself. 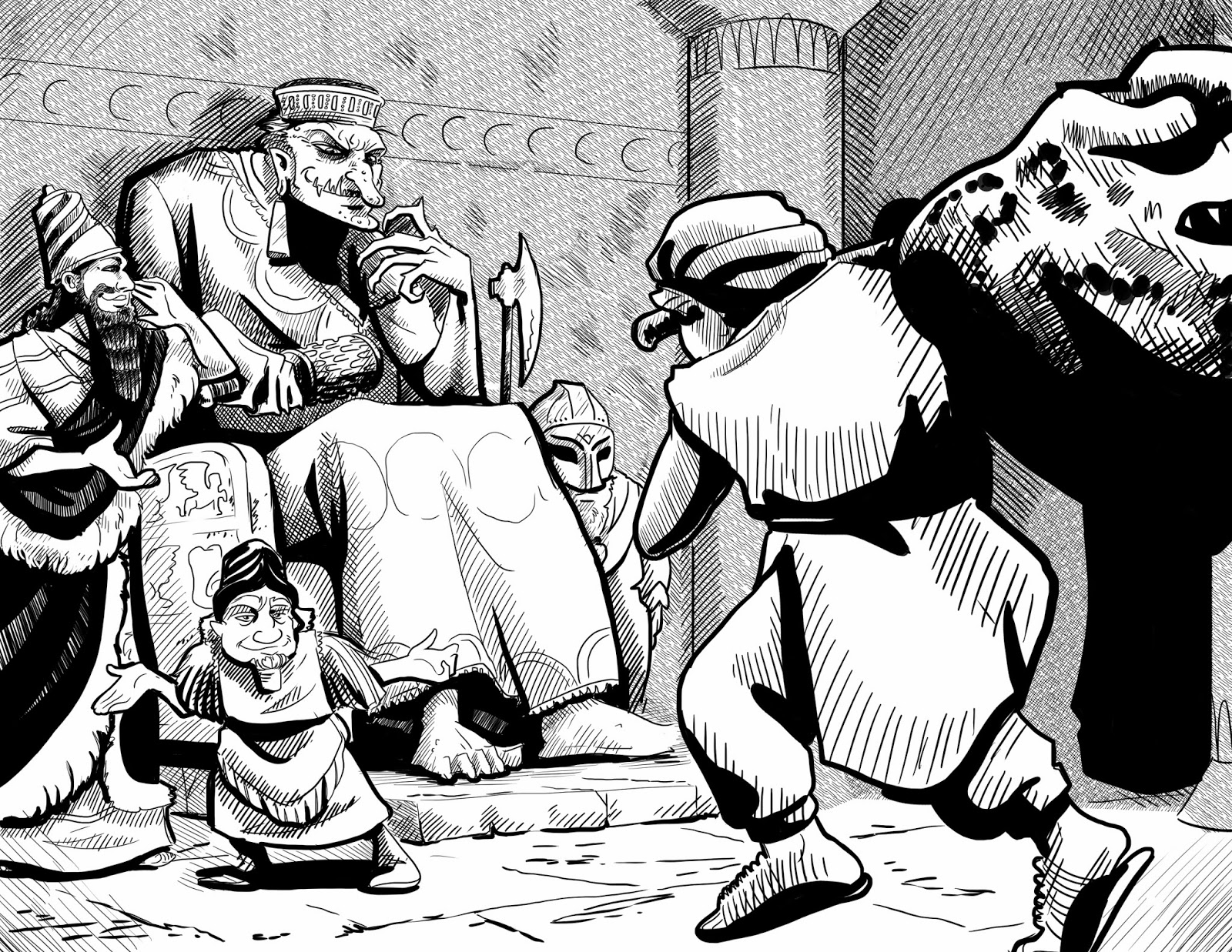 
-Enos Ozihel (my character), an Orc who worships Ozias.

-Shillek, a Halfling from the Shahr Republic who has business in the North.

-Varia, a Human from East.

This session began where the last left off, with us continuing to groom Prince Orthu for his upcoming marriage with Anaree, daughter of the Emperor of Mandaru. We also revisited Anaree herself to gauge her feelings on our most recent accommodations.

King Malka agreed to make Anaree a general in his army and she would be allowed an elf consort (which would also make an heir possible). She liked this arrangement but took pleasure in belittling our intelligence and upbringing, which were were more than happy to endure for the sake of our King. It also seemed like we were establishing ourselves as her most trusted contacts in Atroxis.

We then returned to Atroxis via the portals the King's Sertori created. There we learned that Ozias wished an audience with us in his ice palace. We set north immediately for the Island of Atroxis. Though a short voyage we became lost at sea briefly due to a poor Survival Roll on the Captain's part. This brought us into the waters of pirates who tried to board our ship. Attempting to take a ship with seven Sertori aboard proved their undoing and we defeated them, taking some prisoners and bringing the bodies of the dead as offerings to our god.

Finally we made it to the ice palace of Daethron, and appeared before Ozias in a chamber lined with pristine armor and a glowing throne. The lich appeared before us and spoke, thanking us for our efforts and giving us the gift of "the second death" as a reward. This gift means when we next die in battle, we will rise back to life. It only works one and is considered a rare honor, reserved for a select few.

Enos made the mistake of asking how to put the gift to use, and Ozias replied "Destroy the Caelcori and defeat Caelum." The Caelcori are a powerful order of Sertori who operate in the shadows of Caelum society. Ozias told us that Atroxis cannot defeat Caelum unless the Caelcori are taken out first. We accepted his decree and took our leave.

This presented a huge issue. The Caelcori are secretive and powerful. There is no way seven Sertori can defeat them in a direct battle. Particularly our seven, because so few of us have combat spells. Instead we decided to recruit and secured the King's permission to grant 100 acres of land to any Sertori who comes to Atroxis to serve. We also went to Mandaru to speak with the Emperor.

Getting an audience with the emperor required bringing Prince Orthu. We decided to present our plan to Veja Kashan (The Emperor) as if it had been the prince's (in order to improve his standing among the elves). We wanted to recruit from the Fellowship of Promestus in Ronia but Ronia is at war with Sardona, a client of the Mandaru. Veja Kashan said he was agreeable and could offer the Sardonan's land after the conquest if they allowed us to work with the fellowship but we would need to go and ask the Sardonans ourselves.

We are currently working on making those arrangements but in the meantime we decided to lure and capture a Caelcori. Our plan is to infect him with Aetos' vampirism, creating a minion we can send back to the Caelcori headquarters.

We learned that there is a Caelcori member along the frontier between Caelum and Atroxis who is a sort of ranger and known for investigating into our area. We constructed an inn and spread rumors that is was spawned by a recent Grim. We then used spells to make the place appear supernatural, with Aetos acting as the inn keeper.

A Gru Sertori showed up and became suspicious by some of our actions. Aetos bit him in the neck and the Gru cast a powerful spell, making himself blind but vastly increasing his powers. This is where the session ended and we intend to resume the combat next time.

Posted by BEDROCK GAMES at 9:36 AM