When I first started work on Wandering Heroes of Ogre Gate, I wrote this blog post about the Wuxia Dungeon (and a PART II). This is something I have commented on a lot over the years, and my point was to emphasize that dungeons have just as much, if not more, of a role in wuxia as they do in medieval fantasy. I think there is an assumption that because wuxia also emphasis other things like drama between characters, that dungeons have less of a place. And my point was that a balanced wuxia campaign can include plenty of dungeons, and they provide plenty of fun and excitement. Here I want to talk about wuxia dungeons suited to October. 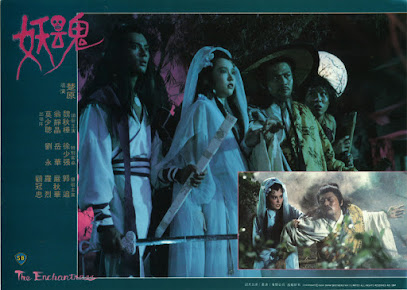 A lot of wuxia films blend supernatural and horror (and plenty of horror films blend in wuxia elements). There is a fine line, as many more wuxia stories and films walk up to that line but don't cross it. For example Hua Shan's film, Bloody Parrot, presents a situation that seems supernatural but later turns out to have a logical explanation (still horrifying, but logical). On the other hand there are movies like Chor Yuen's, The Enchantress (not to be confused with Swordsman and the Enchantress), which embraces the supernatural. In the end, in an RPG it is a matter of taste and style. I often have supernatural elements like ghosts and spirited beasts present because it just makes it easier to have a long-ongoing campaign by giving the GM more tools to select from when designing adventures (it also adds more tonal variety). With that in mind, these are some of my favorite haunted wuxia dungeons I've done over the years. 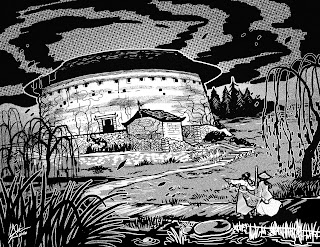 One of the earliest haunted dungeons I did was Iron Temple. This became part of The War of Swarming Beggars (I always wished I had published this as a book because the overall concept was so good). You can find the map and description of the dungeon (fully useable) HERE. The background is a great master destroyed a temple 60 years ago with a device called the Thousand Painful Deaths Flower (which also appears in the Maidens of the Jade Blue Sky sects book). The place became haunted, with the attacker and all the nuns of the temple turning into various ghosts. This was an adventure I remember working really well due to the supernatural elements.

My favorite haunted wuxia dungeon is of course, House of Paper Shadows (in print HERE). It is an expansion of the Society of Leather Shadows (AKA The House of Paper Shadows) that first appeared as a small entry in the WHOG rulebook, due to their use of Leather Shadow Puppets (one of the more horrifying monsters in the game). At first it was going to be a subtle haunted house, but I ended up going in a much more gruesome direction (probably because I was watching a lot of Kuei Chih-Hung films and similar types of movies at the time). One of my readers described it as "sadistic". So this is not a subtle dungeon of horror at all. It is basically about a wasp demon who manufactures supernatural shadow puppets using human flesh. There are a lot of Clive Barker vibes. But it worked great at the table. I think part of that is the dungeon fully commits to the premise, but also it handles the backstory in a clever way with a small hidden time travel adventure that can reveal bits of the past (and give the players the power to alter the present). The other thing that makes this one great is the maps. Francesca Baerald produced a marvelous map for the book. It is a haunted earthen roundhouse (a Tulou dwelling).

In Strange Land of Li Fan and the Ogre Gate Inn book I made a number of scary wuxia dungeons. That whole book is filled with stuff inspired by Pu Songling, and the region is meant to be more supernatural in tone. Perhaps the ultimate horror dungeon for wuxia is Yao Gong Palace. This is the foundation of the setting itself, and introduces an interesting opponent called the The Pure Ones. 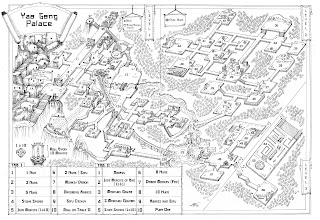 I think the most effectively horrifying entry though in Ogre Gate Inn is Bone Kingdom. It is a cave complex inhabited by three warring sisters who have all kinds of supernatural minions, including Death-Cursed guardians who painfully decay but never die. The dungeon itself is divided into three zones, each controlled by one of the sisters.

The Ogre Gate Inn itself is something of a horror dungeon as well. It is three-layered, so it does depend on how deep the players go. But if they venture to the end, they find some truly terrifying creatures hidden beneath the inn itself.

Another favorite of mine is She Lies in Stone (I challenge folk music fans to find the connection between this and Maidens of the Jade Blue Sky). This appeared on the blog is about a spirited turquoise stone who marries a man and uses him to lure in martial heroes that she feeds upon. It is a small dungeon but very fun and quite scary.

Posted by BEDROCK GAMES at 1:07 PM