This is an entry on the Blood-Stained Roads Table. You can see the main table HERE.

THREE: SHE LIES IN STONE
This is a small supernatural adventure hook in which the party is approached by a desperate looking man named Luo Ting. He is seeking brave heroes to help rescue his wife, Mochou, from a terrible accident in a nearby cavern. In truth his wife is a Spirited Stone hungry for the flesh of martial heroes. Luo Ting tries to lure them into the cavern where he intends to trap them so his wife can feast on their bodies. However a clever and compassionate party may find better ways to help them.

BACKGROUND: A LOVE BORNE OF STONE
Luo Ting was never successful in love, but had a romantic heart and a gift for poetry. A failed scholar, he often left the city for the nearby hills to reflect on his loneliness. He happened upon a wide cavern one day, walked deep inside and found a well-lit shaft. Something about the pit put him at ease and he laid down beside it. He began speaking into the hole, confessing his dreams and disappointments. This gave him comfort so he returned each day. Unknown to him, this caused a deposit of turquoise to awaken with spirit.

When he returned the next day, he was surprised to hear a response from within the pit. A gentle voice replied and called herself Mochou. They spoke to each other and he found himself in love with the creature below. Mochou said she wanted to leave the pit and be with him forever but she was not yet strong enough. She needed to feed if she was to become more human. At first she needed only leaves and branches. But soon she required grains and fruit. Before long she was eating meat. Within a few months she talked him into luring a person into the pit so she could devour them. With each meal her vitality grew and so did their love.

Eventually, Mochou realized that mere human flesh was not enough. She needed the flesh of the cultivated. Only Martial Heroes or other beings who cultivate Qi energy would help her progress. She told Luo Ting to find heroes and bring them to her cave, then lure them into the pit.

He then set off and this is how he found the PCs.

HOOK: A REQUEST FOR HELP
Luo Ting approaches the party looking concerned. He tells them his wife fell inside a pit in a cave and he needs help getting her out. If they won’t help out of kindness he lies and says he can give them 50 golden taels when they get back to his manor. If they go with him, he tries to trick them into entering the pit, then seals it with a switch, and allows his wife (a Spirited Stone) to feed on them.

THE TURQUOISE CAVE
The cave looks normal except for frequent turquoise deposits. Luo Ting has only been in area 1 for the most part and hasn’t explored the rest of the cave. There is a hidden tomb as this used to be a sect headquarters of a group called the Flying Sword Sect. They perished long ago in a great battle. Signs of the battle can be seen in Area 5. 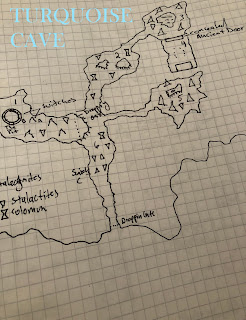 1. The Pit
This pit is where Mochou resides (see her entry below). The pit itself has been lined with carved stone by Luo Ting. He has also fitted two switches in the chamber to help them trap people. One of the bricks lining the pit can be moved like a switch. This is Switch B. If moved it causes a flat piece of stone to seal the pit, trapping anyone inside. The second is one of the stalagmites (Switch A). When pulled this drops a barred gate at the entrance of the chamber.

2. Trapped Chamber
This room was trapped by the sect who resided here long ago. The stalactites in this room are actually sharpened to fine points and fall as people pass under them. Anyone walking through the room has a 4 in 10 chance of being attacked by a stalactite trap.

3. The Chrysanthemum Pool
This is a simple pool of water. But at the bottom is a square piece of stone with a map showing the way to Chrysanthemum Lake.

4. Concealed Tomb
This is where the founder of Flying Sword Sect is buried, Master Shizhong. There is a stone coffin but more importantly there is a wooden scroll that mentions Spirited Stone. It says that the stone of the cavern is prone to becoming spirited and claims three spirits have arisen in 300 years before the tomb was built. It also says that Master Shizhong’s disciple married one of these spirits and was able to live in peace by taking her to Chrysanthemum Lake. According to the scroll, the waters of the lake sustained the spirit and meant she didn’t have to kill to survive or cultivate. Master Shizhong states he believes a piece of the moon fell into the lake and this is what gives it such properties (this may or may not be true).

5. Battlefield
This chamber is where a great battle between Flying Sword Sect and Raksha Clan occurred. Flying Sword were slaughtered. There is a flat-topped mound and on this is a great deal of dust and debris. Anyone who sifts through finds a golden medallion with a sword on it and the characters for Flying Sword Sect. Those who don’t sift through can spot it on a Detect Roll TN 10.

The Flying Sword Medallion: This belongs to the sect leader, Sky Blade. Anyone who holds this medallion can command Mochou. This isn’t a magical effect, she just understands that the person who holds the Medallion speaks on behalf of Sky Blade and she respects their authority.

6. Entrance
This is the entrance to the cave. One of the stalagmites here is a switch (Switch C). When pulled it drops a gate at the entrance, trapping people inside.

RESIDENTS OF THE CAVE
LUO TING
Luo Ting is a hopeless scholar. He actually knows a great deal about the classics and about other matters, but his shoddy calligraphy keeps him from passing the exams. He also has a poor grasp on human nature and has missed many opportunities that would have aided his ambitions to obtain a respectable post. More than anything however he wants a wife and family. And both due to his lack of wealth, lack of position and inability to deal with women, he had also failed at this, until recently.

He found a cave with a pit where he sat and began voicing his hopes, dreams and disappointments. Eventually a woman’s voice replied from below. This spirited stone (see Mochou) expressed her love for him and her desire to be human so they could be together. He began feeding her. It started small with vegetarian offerings, then slowly progressed to human flesh. All this helped her become more real. Now she needs the flesh of those who cultivate Qi. He is willing to provide.

Luo Ting is a moderately skilled tinker and has set up contraptions in the cave to help him and Mochou trap victims.

MOCHOU
Mochou looks like the torso of woman sculpted from turquoise at the bottom of the shaft. She is in love with Luo Ting and considers him her husband. She wants to be with him forever and must consume the flesh of martial heroes to become human. Her body seems to grow from the stone itself and she cannot move freely from here until she consumes more martial heroes.

Mouchou controls the tubular shaft of the cavern and can cause it close in on intruders using the jagged rocks along its surface to crush and devour. She also has sharp teeth of her own. Her grip is like iron and difficult to escape.

Mochou has an affinity for Flying Sword Sect and is technically like a disciple of the sect. Anyone who presents the Flying Sword Medallion to her, she will not attack and she is receptive to their commands. One way she can survive is by consuming water from Chrysanthemum Lake. If she does this for three months, she will be able to move freely, and if she goes to live at Chrysanthemum Lake, she can sustain herself indefinitely without killing anyone.

Many-Attacks: Mochou can make multiple attacks every round. She can bite, attack everyone inside the shaft itself (but not those inside the pocket she herself resides in), and she can freely attack or grip with both arms.

Stone Attack: Mochou can manipulate the stone pit wall like a maw. She causes it to constrict and uses the jagged stone like teeth. Anyone inside the passage way is vulnerable. Make her Stone Attack Roll against Evade. On a Success she inflicts 6d10 Open Damage.

Iron Grip: On a Successful Grapple she latches her hands onto a person’s body (usually grabbing their wrists). This is nearly impossible to escape, requiring a Muscle TN 10 roll.

Qi Absorption: Though she doesn’t drain Qi like some demons, she can absorb it from the blood and flesh she consumes. Every 1 Qi rank she absorbs increases her wounds by 3 and every 5 Qi ranks she absorbs gives her one new power (and brings her closer to a true human form).

CAVERN MAP
I took inspiration from a website called National Part Maps (NPMaps.com). This is a great resource for GMs who want a sense of how to map unusual geography. Also the map icons are particularly useful.
Posted by BEDROCK GAMES at 1:47 PM