This is an entry on the Blood-Stained Roads Table. You can see the main table HERE. This draws inspiration from Disciples of Shaolin and a number of Iron Triangle movies (films featuring Ti Lung and David Chiang, directed by Chang Cheh).


THE BURIAL
In this adventure hook, the PCs happen upon a man and woman standing before burning incense and offerings at a recently dug grave. The women is really a prisoner at a hair comb workshop. If the players learn about this they may go and confront the owner, Meng Yu.

HOOK
As the players travel they happen upon a man and woman standing before a recently made grave. The grave rises high like a mound and it seems normal but hastily done. The woman, whose name is Luo Lei, is essentially a prisoner of Mr. Meng Yu, who makes her work in his hair comb workshop. The man next to her is Zhang Zhe, a foreman at the workshop. He is here to make sure Luo Lei returns within the hour. The burial mound is for Han Lu, a hero who fell in love with Luo Lei and tried to rescue her but was killed by Mr. Meng Yu and his men.

Zhang Zhe is cocky and doesn’t like the PCs interrupting his day. If they ask the pair about the burial mound he will callously say it was someone who didn’t no when to quit. Luo Lei weeps and and tries to catch the player’s attention with her eyes to signal something is amiss (Empathy TN 6 or Detect TN 10).

The situation is complicated by the fact that Zhang Zhe has a legal contract with Luo Lei and so there is nothing the authorities can do. In fact if the players help her escape they would be the one’s in trouble with the law.

ZHANG ZHE (THE GRACEFUL BUTTERFLY)
Zhang Zhe is one of two foreman at the Meng Yu workshop. He is loyal to Meng Yu and likes that his martial talents are appreciated. He is also arrogant, brutish and a bit of a bully though he does have a softer side. When he was young his mother taught him sword dancing with the butterfly swords and silk Ribbon Dancing, something he took to well.

Normally the dancing style he learned is performed by women (and the butterfly sword is often associated with women as well). His fighting style is therefore dance-like and elegant despite his gruff mannerisms in other situations.

Blazing Butterfly Strike: You swiftly stab and slash at multiple opponents, weaving between them with fancy footwork as you do so. Make a Light Melee attack against up to 5 Opponents, doing Normal Damage on a success. Cathartic: On a Success you do Normal Damage plus 2 Extra wounds. In addition, at the end of your attack, make a Speed Roll TN 8. If you succeed you may attack up to five more targets.

Butterfly Ribbon Dance: You slice shred your foe’s clothing, using it to create swirling ribbons to choke your enemies. This must be used cathartically. Make a Light Melee roll against your foe’s Parry, at -1d10 to Counter. On a Success you create strands of fabric then can make a Talent (Dance) Roll against the Parry (-2d10 to Counter) of everyone in a 15 foot area as you weave between them wrapping it around their necks and pulling tight for 3d10 Damage plus 2 Wounds. Also all targets must make an Endurance Roll TN 7 or pass out.

LUO LEI
Luo Lei is a virtual slave, forced to work at Meng Yu’s workshop under a strict contract. She recently fell in love with a man named Han Lu, who tried to rescue her but was killed. She is despondent and wishes only to mourn his death. Now she not only wants escape, but revenge.

Luo Lei is particularly valued by Meng Yu because she is quite skilled and important for training new workers. 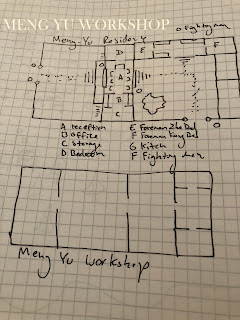 This workshop manufactures combs. They are all high quality and elegant, and Meng Yu has an exclusive agreement with local officials, allowing him to sell directly to the government. This affords him some protection and he has been able to make use of conscripted labor that is only just barely legal. He has official contracts stamped by the local magistrate, that entitle him to 7 years of labor for each worker, and also limits their physical freedom to leave the workshop grounds. The combs of Meng Yu Workshop are made from animal bone and southern bamboo.

The combs are part of a three step process. There are men who handle the processing of the animal bones and carpenters who work the wood. But the final product is constructed and painted by the women of the workshop (Meng Yu believes this is what gives his wares their refined and elegant look).

The contracts for all the workers are stored in an office in Meng Yu’s residence.

MENG YU
Meng Yu is a heartless man who sees people as means to an end. He courts people initially, playing nice, but really just wants them under contract. The only members of his staff he treats well are his foremen and fighting men. Meng Yu has a fondness for poetry and a deep desire to be respected by the gentry so he often engages in contests with them on the subject. The gentry deal with his combs are legendary and he often cuts them good deals, but none truly respect him (and deep down he knows this as he would do the same in their position). He has tried to educate himself on the classics and court etiquette, but can’t help but be the crude merchant he is.

FOREMAN KANG
Foreman Kang is more thoughtful and cautious than Zhang Zhe, but not less cruel. In fact his beatings are legendary among the staff. He carries a stick at all times and uses it to discipline the workers.

Cruel Stab of the Stick: You stab with your stick like it were a sword blade, cutting deeply and painfully. Make a Light Melee attack roll against Parry. On a Success you add +1d10 to your damage roll per rank of Waijia (6d10 Damage). Cathartic: On a Success you do 6d10 Open Damage.

Block of the Stick (Counter): You block a melee attack with your stick, then spin into your opponent for a reverse punch. Make a Light Melee against the Attack roll. On a Success you block the attack. Cathartic: In addition to blocking the attack on a successful Light Melee roll, you can make an Arm Strike Roll and do Normal Damage plus 2 Extra Wounds on a success.