THE FREE SPIRITS OF YUAN MEI

This month I plan on running a series of adventures inspired by Yuan Mei stories. He wrote in the same genre as Pu Songling, but was born one year after Songling's death. Compared to his contemporaries tackling anomaly accounts and tales of the strange, Yuan Mei was something of a rebel and bristled at moralizers (especially hypocritical ones). He was also a pleasure-seeker in life (and had advanced views on things like education of women). He was also influenced by Chan Buddhism, despite being a skeptic of religion. His stories are humorous, grim and graphic. He has been described as a "skeptic-iconoclast" and one of his more conservative rivals said this of him:

"...There has never been anyone [except Yuan Mei] who, in broad daylight and beneath the warming sun, has dared go to this extreme in denying the precedence of the classics, doing away with sanctity and law, and indulging in such perverse, depraved, obscene and licentious ideas!"

That is quite a strong opinion to have about a writer and retired scholar official. Perhaps one of the reasons for this strong view was his accounts often mock officials who enforced public morality in hypocritical fashion (there is a story for example where an official, engages and delights in the very behaviors he is punishing through his selections punishments).

Unlike Pu Songling, Yuan Mei's tales of the strange have not been as widely translated into English. Even when it has been, copies of such translations are often hard to obtain because of the price. His work, Censored by Confucius (Zi Bu Yu), is available in a condensed version published by Routledge. This version has 100 stories, while the full volume contains 747 stories. There is a more complete, 1300 page hardcover, translation available (by Paolo Santengelo) published by Brill. But it starts at 347 dollars. Personally, even though I understand it is an academic book, I think this is egregiously overpriced. I would recommend the Routledge version.

The title of the book is taken from the analects, a passage that describes the things on which Confucius didn't speak: prodigies, force, natural disorder and the gods. It is a fitting title as he seems to strain a bit against the orthodoxy and social mores of his day. This is evident in the tales. 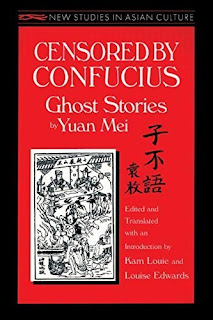 However, Yuan Mei is most famous for his poetry and literary criticism, and it wasn't until his later years that he tackled anomaly accounts.

Yuan Mei was born in 1716 in Hangzhou. His father was a junior secretary and his family was poor, but they were reputable and part of the gentry. He passed his exams at a very young age, and was regarded as a prodigy. However he had a setback and failed one set of official exams. He later related a story of being haunted and warned about his failure the night before by a familiar ghost.

In 1738 he passed the second tier of official exams, the third level of exams the following year, and finally the palace exams, gaining the degree of Jinshi. This enabled him to secure a position at Hanlin Academy. He married in 1739 to a woman named Wong and served as an imperial official. In 1743 he was made a magistrate in Li Shui and other parts of Jingsu. In 1745 he was made a prefect of a region in Nanjing. He retired in 1749 at the age of 33 to Nanjing, writing poetry and attracting some amount of attention for his sex life. His anomaly accounts were published in 1788, about a decade before his death, and they were censored by the Qing government in 1836.

Yuan Mei's attitude towards female education was quite progressive for his times. His tutoring sessions of young women were scandalous. He would tutor them at his Sui Garden Home (it was considered a breach of etiquette, because the norm would have been to teach women at their own home).

His supernatural accounts differed from many of his contemporaries. At this time, such stories were typically didactic, and Yuan Mei had a different approach. He frequently described these tales as frivolous and fun, and when he did have a moral point, it was directed at moralizing officials themselves guilty of injustice. He is therefore often seen as antagonistic towards forms of puritanism, and official confucian orthodoxy.

Stories like the ones found in Yuan Mei's Censored By Confucius and Pu Songlings Strange Tales from a Chinese Studio, were popular with readers at the time. In these stories ghosts are commonplace. Supernature creatures have an almost mundane existence, living lives not unlike our own, but also capable of being revolting and horrific when it is called for. Monsters in these stories feel like real characters with needs and motivations that humans might share.

Yuan Mei's style is rebellious and playful, as well as provocative. And it can be quite earthy at times. I am trying to capture this as I run my Yuan Mei inspired adventures this month. I put together an adventure set near Changdu, where the party confronts a ghostly mystery at a Tea House called The Four Seasons. I ran it with one group already and will run it with another next week. The first group I also intend to do a series of adventures with (one of the characters is a scholar-official and because of the events of the adventure he was promoted to a county magistrate post. The second adventure will occur where this character is governing from.

I will post more about the adventure after I have run it for both groups (just so I don't ruin it accidentally for any of my players). I may post my adventure notes here directly---they are incredibly messy but I think it may be helpful for Strange Tales fans to see them.

I certainly recommend checking out Yuan Mei if you haven't. These kinds of stories very helpful at inspiring adventures. It really doesn't take much more than reading one or two brief accounts (some of them are less than a page long) to instantly have an idea for something. Of course many of the stories are longer and deeper, as well. But most contain some stark kernel of strangeness that is easy to game.

One thing I am enjoying about focusing on Yuan Mei for inspiration is emulating his style frees me up more I am finding. Which works well in a gaming context. It takes that strange component and raises it to an almost gonzo level.

Posted by BEDROCK GAMES at 8:20 PM